On June 30, CureVac (NASDAQ:CVAC) announced final late-stage clinical data for its mRNA coronavirus vaccine candidate CVnCoV. The data was disappointing, to put it mildly, and the stock sold off more than 10% in the after-hours trading session to $66 apiece.

Nobody was more disappointed than the German government, which had invested more than 300 million euros into the vaccine candidate's research and development efforts. And investors should definitely not double down in the face of this blunder -- here's why. 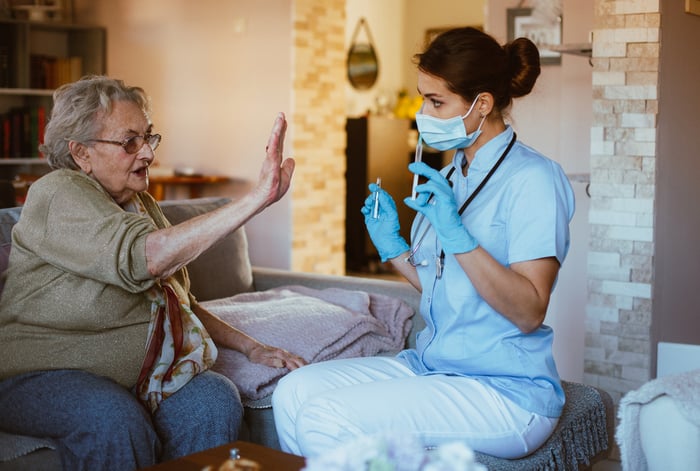 A final analysis of 40,000 participants in its phase 2b/3 trial revealed that CVnCoV demonstrated just 48% overall efficacy in all age groups and against all viral variants. And the news gets worse. The vaccine candidate did not demonstrate statistical significance in preventing severe COVID-19 among seniors (ages 60 and above). CureVac's phase 3 protocol requires that CVnCoV show at least 52% overall efficacy in the final analysis for everyone. So it's safe to say that the study failed.

There is no simple way out of this, either. For example, one can't simply give patients CVnCoV booster shots after the second dose to increase its efficacy. This is because adverse events related to the vaccine increased sharply with dosage, limiting the maximum dose to 12 μg, the amount later selected for clinical trials.

Since a lot of money was put into the vaccine candidate's development, CureVac isn't giving up without a fight. In a post-hoc subgroup analysis, the company claims that CVnCoV demonstrated 77% efficacy in preventing moderate to serious illness and 100% efficacy in preventing hospitalization or death -- among participants ages 18 to 60.

The problem is that coronavirus becomes exponentially more lethal with age. Patients over the age of 65 are 95 to 610 times more likely to die from the virus than those in younger cohorts. So the data exclusion here is a pretty big red flag.

More than a blunder

Some investors may still be hoping that CureVac could land supply agreements here and there. After all, one can claim that having a vaccine with partial efficacy is better than having no vaccines at all. The problem is that CureVac's vaccine candidate really bombed. It would be mathematically impossible for health agencies to meet 60% to 70% herd immunity targets with the experimental CVnCoV vaccine alone.

Rolling out an imperfect vaccine also has disastrous consequences. Take the case of Chile, which fully vaccinated more than 60% of its population with the Chinese-made SinoVac vaccine. However, that country is now seeing dangerously high levels of new coronavirus cases, with hospitals operating at total capacity. The vaccine was found to have an efficacy of just 51% in a large-scale study conducted in Brazil.

Avoid at all costs

Unfortunately, CureVac stock is trading as if its vaccine candidate had  succeeded and is ready to go. I don't think the company's market cap should be anywhere near $12.76 billion with a failed vaccine candidate. What's more, the company's other clinical programs are still in their infancy, such as its phase 1 rabies vaccine.

Overall, due to the poor data on CVnCoV, the company's attempt to spin the story, and lack of substance in other areas of the pipeline, CureVac is a biotech you definitely should avoid.