Whether you are worried about a recession or just want investments you can safely hang on to for years, value stocks are great options to consider putting your money into. With modest valuations and strong fundamentals, these are the types of stocks that can lead to long-term wealth. Some of them pay recurring dividends too.

If you've got $5,000 that you can afford to invest, then three stocks that should rank high on your list of possible investments are AbbVie (NYSE:ABBV), Bank of America (NYSE:BAC), and Dell (NYSE:DELL). They are solid companies that together, can also help diversify your portfolio by giving you exposure to the healthcare, banking, and technology sectors. 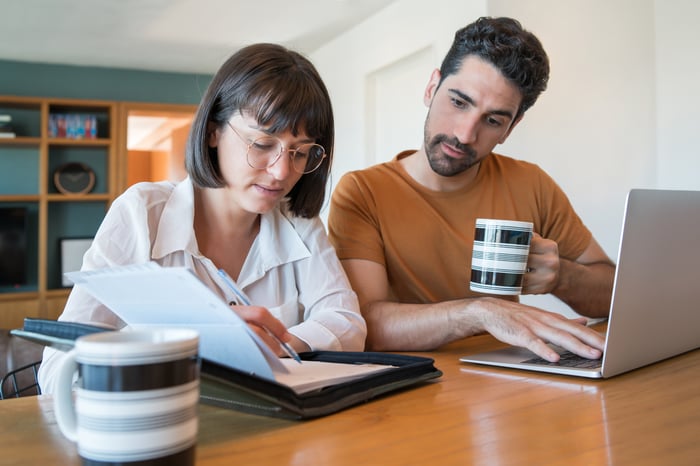 AbbVie may look like an expensive buy when you look at its price-to-earnings (P/E) ratio, which today is more than 40. However, that is based on the company's trailing 12 months. On a forward basis and where analysts expect the healthcare company to be next year in terms of profitability, its P/E ratio falls to a multiple of just nine. To put that into perspective, industry giant Johnson & Johnson trades at more than 17 times its future earnings and Abbott Laboratories (which AbbVie used to be a part of) is at a multiple of more than 27. This makes AbbVie seem like a cheap buy in comparison, by a mile.

One of the big reasons the company's financials will get a boost is that they now include the results from Botox maker Allergan. The deal officially closed in May 2020, which means it hasn't been a full year yet where the company's top and bottom lines have benefited from the inclusion of the business.

When AbbVie reported its first-quarter results for the period ending March 31, its sales looked incredible at $13 billion, representing year-over-year growth of 51%. However, Allergan was a big reason behind those stronger results; on a comparable basis, the revenue growth was closer to 5%. But what's important is that Allergan is now included in the sales mix, and that means better profit numbers. In the first quarter, net earnings of $3.6 billion were 18% higher than in the prior-year period. And the company is bullish on its future, projecting that for 2021 its diluted earnings per share will come in as high as $7.47 -- nearly three times the $2.72 it reported in 2020 and 41% better than the $5.28 it reported in the last full non-pandemic year in 2019.

On top of these expectations, AbbVie's dividend yield today rings in around 4.3%-- much higher than the S&P 500 average of 1.4%, making AbbVie a sound investment to add to your portfolio today.

Shares of Bank of America have been soaring over the past year, up more than 72%. That's better than the S&P 500's returns of 39% (and well above AbbVie's modest 17% rise in value). But despite that incredible performance, the top bank stock still isn't an expensive buy; at a forward P/E of 13 it is trading at a slightly steeper valuation than its peers Wells Fargo and JPMorgan Chase which trade at around 12 times their future earnings, but that's still not a terribly high value for value investors. And with interest rates potentially on the rise as early as next year, that multiple could come down in a hurry as banks can capitalize on better rates and pocket more of the spread between what they pay and what they charge.

Bank stocks are often good value buys because they usually post profits and aren't extremely aggressive in their growth. Over the past four quarters, Bank of America has generated a profit margin of 24%. And when looking at the last five years, its bottom line has typically been at least 19% of its revenue. The company confirmed the strength of its financial results after passing the Federal Reserve's 2021 stress test. As a result, it will be hiking its dividend payments by 17%. Other banks also made rate hikes amid strong performances in the sector. With a yield of 1.8%, Bank of America's payout also comes in higher than the S&P 500 average.

For long-term investors, Bank of America is an easy stock to put away in your portfolio and forget that you own. Its stellar results make it among the safest buys out there and an above-average yield will give you extra incentive to hang on and watch that dividend income grow over the years.

The tech sector usually doesn't contain many great value buys, but Dell is an exception. By its forward P/E of less than 12, it's an even cheaper buy than Bank of America. Even a safe tech stock like Cisco trades at more than 16 times its future earnings. You might not expect that from Dell given that it has already generated returns of 83% over the past year. But the stock may have even more to give: Morgan Stanley recently priced the stock as high as $130 (last week shares of Dell closed right around the $100 mark).

Dell is coming off a strong first quarter fiscal 2022 for which it reported sales of $24 billion in the period ending April 30. That was a year-over-year increase of 12% -- a sharp improvement given that over a two-year span from fiscal 2019 to fiscal 2021, its top line grew by just 4%. The company doesn't think it's a fluke, either. With more businesses turning to the cloud and transforming their operations so that they are more digital and versatile, Dell sees a brighter future ahead. Not only did its product sales grow by 12%, but service-related revenue (which accounted for more than a quarter of its top line) also rose by 10% from the same period last year.

Although the stock is the only one on this list that doesn't pay dividends, investors will likely be OK with that given the potential capital gains they could earn from owning this top computer company for many years. If you want some attractive growth opportunities along with great value, Dell is a stock you won't want to pass up.