With a stock price that has soared greater than 450% over the past five years, Netflix (NASDAQ:NFLX), the leader in streaming entertainment, has been a big winner for investors. Co-founder and co-CEO Reed Hastings was convinced many years ago that traditional cable television would cease to be the primary form of video media consumption, and he steered his company to spearhead this movement.

Some might be wondering whether the market-beating returns from the Los Gatos, California, company are a thing of the past. I'm here to tell you to think again. 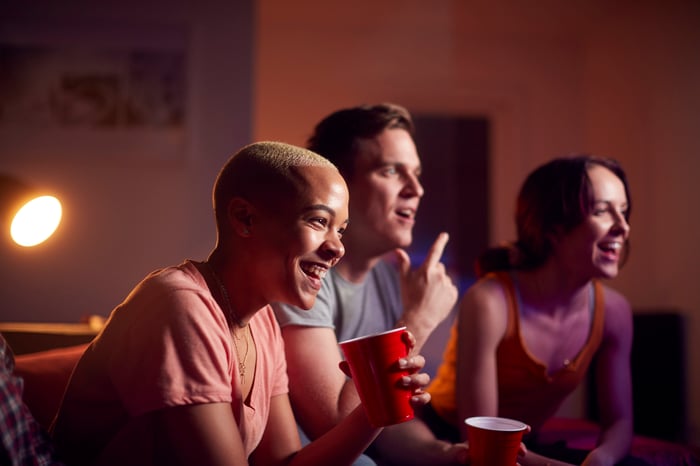 1. It has a big first-mover advantage

It seems like the list of streaming service providers grows longer each day. Options like Disney+, Prime Video, HBO Max, and Peacock are also vying for consumers' attention, but they all lack Netflix's first-mover advantage. This gives it a key edge that it will continue benefiting from.

Hastings' foresight led to his company strategically borrowing capital in order to fund its growth, focusing on creating original content. He knew that once the company reached a certain size, it would be hard for rivals to compete.

Today, Netflix has 208 million subscribers worldwide, more than any of its competitors. And even more crucial is the fact that the company's massive content budget ($17 billion in 2021) can be spread out over these customers, making it far more economical than newer entrants that have much fewer subscribers.

The recently announced tie-up of AT&T's WarnerMedia with Discovery Communications is a clear example of smaller players trying to keep up. In order to be one of the winners in the streaming wars, it's absolutely necessary for a business to have scale. Netflix is far ahead in this category

Another reason Netflix is a good buy is quite simple: It offers consumers a fantastic product.

Management has a razor-sharp focus on constantly improving the service. The company announced a price increase last October, and membership engagement (up) and churn (down) actually improved in the most recent quarter compared to the first quarter of 2020. Viewers see the inherent value and have no issue paying up for it.

Netflix is now a force to be reckoned with when it comes to content production. This year, it nabbed an impressive 35 Oscar nominations, far more than any other studio. What's more, its shows are starting to have major cultural relevance.

For example, The Queen's Gambit, released in October, became Netflix's biggest limited series ever. And it led to a heightened interest in the game of chess, significantly boosting sales of chess sets following the show's release.

The French-language series Lupin, watched by 76 million member households in the first 28 days, spurred sales of the book it was based on, shooting it up Amazon's best-seller list. By the way, the book was written in 1907!

A deal with Amblin Partners, Steven Spielberg's production company, will only bolster Netflix's prowess at content creation. The legendary director and his firm will produce multiple feature films for Netflix over the coming years.

3. It has ample new revenue opportunities

And lastly, Netflix's valuable intellectual property has afforded it the ability to seek out new revenue sources. This is a positive for investors, as it demonstrates the optionality the business possesses.

In May, it was rumored that the company was looking to hire a video gaming executive, with ambitions to enter this entertainment category, possibly in 2022. Potentially mimicking a subscription service like Apple Arcade, Netflix wants to drive more interaction with its customers.

It also launched an online store, netflix.shop, to sell high-quality and limited-edition merchandise based on its popular shows and movies. The company plans to work with up-and-coming designers, with the goal being to allow its subscribers to connect more with their favorite stories.

Don't expect this to be a meaningful driver of revenue, though. It does benefit Netflix by giving its viewers more chances to interact and engage with the business, which is the most important thing.

Netflix has long been a winning stock, and the three reasons I outlined above should propel the company even further over the next decade as it continues its dominance of the burgeoning streaming industry.