Some investors looking for portfolio exposure to precious metals choose to buy physical gold. Others prefer to invest in gold miners. But there's another option that is often overlooked: streaming and royalty companies like Royal Gold (NASDAQ:RGLD). Streamers fill a unique niche in the mining industry, and their business model allows their shareholders to avoid many of the risks inherent to the other two options mentioned above.

Right now, Royal Gold's share price appears to be lagging its main peers, which could make it an interesting investment choice today. Here are three reasons you might want to jump aboard.

Royal Gold has fallen to the back of the pack

Companies like Royal Gold provide cash up front to miners that they use to cover construction costs or reduce their debt. In exchange, the streamers get rights to buy precious metals at reduced rates in the future. It's something of a win-win. Miners get access to the cash they need without having to lever up their balance sheets or sell shares, and streamers lock in low prices for metals they can resell later. This helps streamers maintain strong margins in both good markets and bad, whereas miners' margins can fluctuate quite dramatically.

A direct gold investment, by contrast, has no growth potential other than when the metal's price moves, while miners and streamers can actually expand their businesses over time. There are "gives and takes" across all three options, but streamers like Royal Gold offer a good balance of risk and reward. 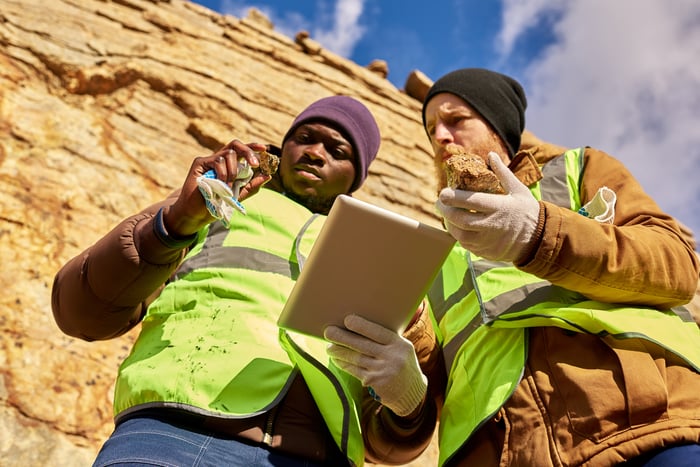 What's interesting right now, however, is that Royal Gold's stock has lagged notably behind its main peers, Franco-Nevada and Wheaton Precious Metals. Basically, Royal Gold's shares have gone sideways since the start of 2020 while its peers are up more than 40% each. But there are some reasons to think that Royal Gold could close that gap.

1. A new mine is ramping up

One of the ways that streamers grow is by investing in new mines. However, those investments are effectively dead money until the mines are actually up and running, a process that can take years (assuming that nothing goes wrong). Royal Gold has helped to fund the Khoemacau Project in Botswana, a copper and silver mine that was, as of March 31, 92% complete. The mine has since opened, with initial production set to take place in July. It will continue to ramp up as the year progresses and, as it reaches full production, it should turn from a cash drain into a cash gusher for Royal Gold.

According to Royal Gold, it "holds the right to purchase 84% of the payable silver from Khoemacau until the delivery of approximately 33.6 million ounces of silver, and 42% thereafter." Royal Gold's cost is set at 20% of the silver spot price. With silver prices at historically high levels today, investors should be watching this project's progress very closely.

2. It will make up from a temporary setback

Royal Gold also has an investment in Barrick Gold's Pueblo Viejo mine, where an expansion project is underway. A problem with the mine's operations led to a 37% year-over-year drop in silver stream deliveries during the first quarter -- and less silver delivered means less income for Royal Gold. 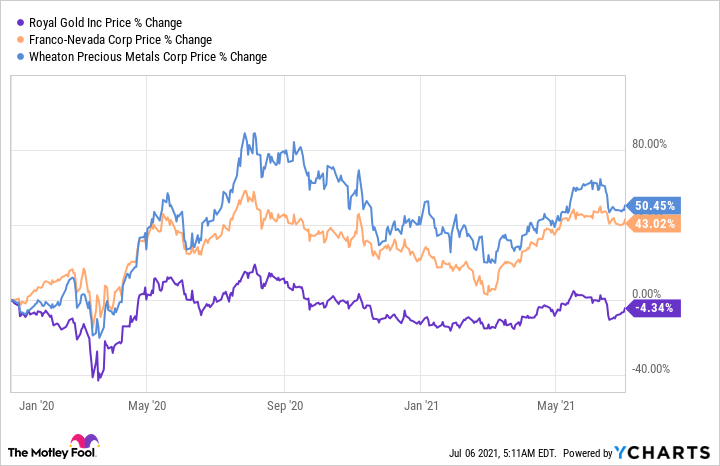 However, Royal Gold's agreement with Barrick requires the miner to make up any shortfalls. So, once the problems are dealt with, Royal Gold will likely see an increase in its silver take from Pueblo Viejo for a period of time as Barrick works to live up to its side of the streaming bargain. Therefore, this won't just be a return to normal, but a near-term boost to the silver stream from the mine.

3. It has investing firepower at the ready

The first two reasons to like Royal Gold right now are potential near-term catalysts that could help the company close its valuation gap with its peers. The third is a bit more uncertain, but still a net positive: Royal Gold has liquidity of more than $1.2 billion. That's a fair amount of deal-making capacity that it could put to work in a new mine project or to buy an active streaming deal.

In fact, after its most recently reported fiscal quarter ended, Royal Gold paid down its credit facility, leaving it with no debt at all. To be fair, other streamers have strong liquidity as well, so this isn't exactly a major point of difference. However, it opens up the door for a potential growth catalyst that wouldn't be there if cash were tight. And if Royal Gold pulls off a good deal, perhaps beating out its peers, investors are likely to rethink their position on the stock.

Overall, it looks like Royal Gold will see better days ahead as its investment in the Khoemacau Project starts to bear fruit and the silver output from the Pueblo Viejo mine gets back on track (and Barrick Gold makes up for its previous shortfalls). On top of that, it has ample deal-making capacity to power its long-term returns. Add it up, and there's a good reason to think that Royal Gold's stock could start to close its gap with Franco-Nevada and Wheaton. If you are looking at precious metals investments today, Royal Gold is worth a deep dive.