These three stocks are solid bargains in a recovering economy.

Growth stock investing has been all the rage since the recession of 2008, thanks to historically low interest rates and huge amounts of stimulus money. However, that changed in February 2021, when investors started rotating capital from overheated growth stocks to value stocks. While this sudden shift in trend may have spooked some retail investors, it is still no reason to shy away from the stock market. Historically, the stock market has proved to be a wealth creator -- especially for long-term investors.

Retail investors can reduce the downside risk by investing in a mix of well-established, value-generating companies and innovative high-growth companies. In case you have $1,000 extra cash not needed to pay bills, then the following companies can prove to be worthy candidates in such a balanced portfolio. 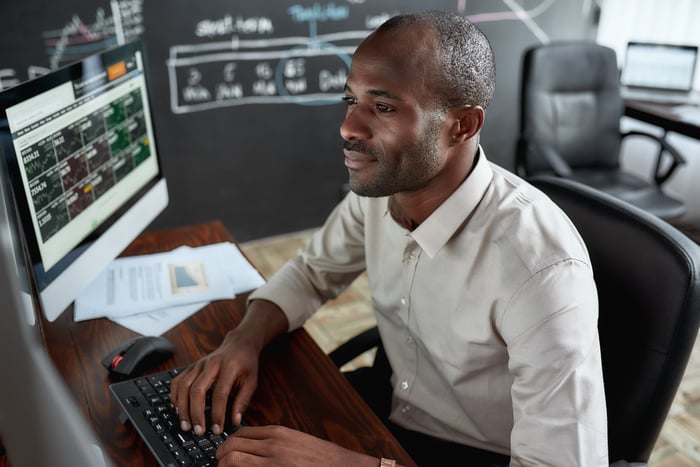 Outsourced semiconductor assembly and testing (OSAT) company ASE Technology (ASX 1.00%) gained over 69% in the past year. The company accounts for a 35% revenue share among the leading 10 OSAT companies in the world. The company also enjoys a strategic relationship with Taiwan Semiconductor Manufacturing (TSM 1.53%), one of the world's largest independent semiconductor foundries. ASE Technology offers a complete semiconductor manufacturing solution composed of assembly, testing, and electronic manufacturing services (EMS) to its clients. Against this backdrop, the company is well-positioned to benefit from increased demand for advanced semiconductor chips in areas such as 5G, WiFi 6, data analytics, high-performance computing, and artificial intelligence in a recovering economy.

In the first quarter (ending March 31, 2021), ASE Technology's net revenues were up 23% year over year to $119.47 billion. The company's net revenues also jumped by 17.1% year over year to $41.33 billion in April 2021 and by 18.1% to $42.27 billion in May 2021. The company has also reported a steady improvement in profitability, with gross margins rising from 12.8% in the first quarter of fiscal 2019 to 18.4% in the first quarter of fiscal 2021. A limited supply of capital equipment and wafer components has forced clients to place long-term orders with ASE, even for products that should be delivered in 2022. Wirebonding capacity shortage has also resulted in increased pricing power for the company. These trends are driving momentum in ASE's semiconductor assembly, testing, and manufacturing (ATM) business.

Trading at only 0.98 times trailing-12-month (TTM) sales, ASE Technology is quite cheap. However, the OSAT is a moderately fragmented market with many other prominent players such as Amkor Technology, Powertech Technology, and Jiangsu Changjiang Electronics Technology Co. A few chip manufacturers and third-party foundries have also started investing in semiconductor assembly and testing activities. However, despite the existing and upcoming competitive challenges, ASE Technology is an attractive way to get exposure to the burgeoning semiconductor industry at reasonably cheap stock prices.

Shares of supply-side advertising technology company PubMatic (PUBM -1.25%) have been quite volatile in the first half of 2021. Recently, though, Alphabet subsidiary Google's announcement to delay the phasing out of third-party cookies from 2022 to late 2023 seems to have somewhat stabilized the stock.

Google's announcement has given advertising technology companies additional time to decide their way forward in a cookie-less world. PubMatic has already made significant strides in this direction and is using alternative identifiers instead of third-party cookies and Apple's identifier for advertisers (IDFA) for earning the majority of its revenues.

But there are several other factors working in favor of PubMatic, which programmatically sells advertising inventory on behalf of around 1,250 publishers and application developers to advertisers and advertising agencies. Global programmatic ad spending is expected to grow 20% year over year to $155 billion in 2021. In addition to expansion in the total addressable market, PubMatic will continue to benefit from increasing digital ad spend in recovering verticals across geographies and rapid growth of the connected TV(CTV) ad market in the next few years.

In the first quarter (ending March 31, 2021), PubMatic's revenues soared 54% year over year to $43.6 million, while net income was up by 444% year over year to $4.9 million. The company's TTM net dollar-based retention rate (how much more did the same customers spend on the company's products and services as compared to the prior year) was a solid 130%. At the end of the first quarter, the company carried cash worth $1.1 billion and zero long-term debt on its balance sheet. PubMatic now expects fiscal 2021 revenues and adjusted earnings before interest, taxes, depreciation, and amortization (EBITDA) to be in the range of $195 million to $200 million and $54 million to $58 million, respectively.

PubMatic is currently trading at only 1.73 times TTM sales. Against the backdrop of solid secular tailwinds, a robust financial growth trajectory, and a healthy balance sheet, the company appears to be an attractive bargain pick for retail investors.

Although more speculative than the other two on the list, Hyliion (HYLN -0.22%) can prove to be an exceptional play on the trend of increasing electrification in the global automotive industry. The company went public in June 2020 by merging with a special-purpose acquisition company (SPAC), Tortoise Acquisition Corp. Recently, Hyliion was included in the broad-market Russell 3000 Index, which implies more access to institutional capital in coming months.

Hyliion's hybrid solution involves electric powertrains that are installed in existing diesel and natural gas-powered Class 8 trucks (gross weight vehicle rating over 33,000 lb). This package converts them into more fuel-efficient and less polluting hybrid trucks. The company is also gearing up for the launch of Hypertruck ERX -- a fully electric powertrain that uses an onboard generator to produce electricity from natural gas or hydrogen -- by 2022. With ACT Research estimating the number of Class 8 vehicles in operation to be over 8 million, Hyliion expects its addressable market to be worth $800 billion.

Hyliion offers a cheaper solution for existing truck owners compared to other electric truck players such as Tesla and Nikola. The company claims that its hybrid solution has a customer payback period of less than two years. Also, electric truck drivers suffer from range anxiety (worrying about reaching their destination when the battery charge is low) and long battery-charging times. However, trucks using Hyliion's solutions utilize the existing fueling infrastructure in the U.S. of nearly 1,000 public compressed natural gas stations and around 70 liquefied natural gas stations.

Hyliion now expects to start earning revenues in the second half of fiscal 2021. At the end of the first quarter (ending March 31, 2021), the company carried total cash worth $479.6 billion and no debt on its balance sheet.

Trading at 2.81 times its book value, the company is not cheap, especially since it is not yet earning revenues. However, considering the growth opportunity and its solid balance sheet, Hyliion can prove to be an attractive investment for retail investors, even at these elevated levels.

Down 56%, There Has Never Been a Better Time to Buy This Growth Stock