It is well-documented that Americans consumed significantly more alcohol during the pandemic. What doesn't get as much coverage is that we were trading up to more expensive drinks also. The rising popularity of alternative alcoholic drinks is partly behind the trend.

Boston Beer (NYSE:SAM) calls its hard seltzer, beers, and hard ciders "high-end", and it's exactly the type of more expensive drink Americans opted for last year. The trend isn't slowing down. It's one of the reasons I recently purchased shares of the company for my own portfolio, despite a historically rich valuation. 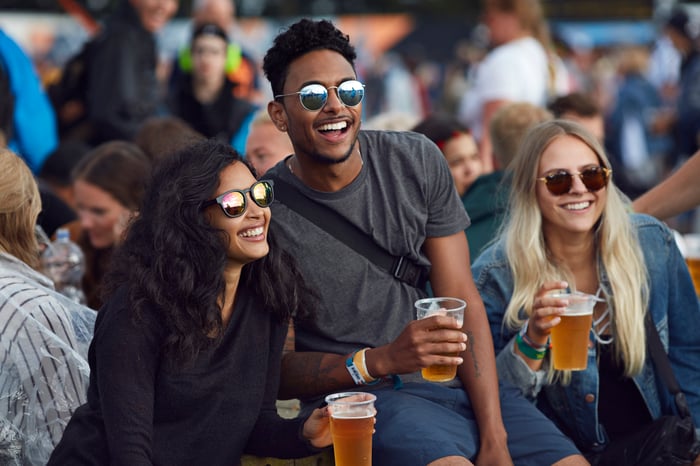 1. American consumption: the power of habit.

About three-fourths of Americans reported drinking alcohol at least one more day per month last year. Surprisingly, that change wasn't global. In Europe, every country but England showed a decrease in alcohol consumption in the first months of the pandemic. Since Boston Beer's sales are mostly to domestic distributors, it was a big beneficiary of the uptick in consumption.

Despite many restaurant closures, the company's revenue came in at $1.85 billion, 39% greater than 2019. Growth has held up so far this year even as things get back to normal. Management raised guidance when it reported first quarter earnings and now expects full-year growth in depletions -- the rate that distributor's send product to end users -- of between 40% and 50%. Adjusted earnings-per-share (EPS) guidance was raised to between $20.00 and $24.00. At the midpoint, that would represent almost 42% over 2020. Much of that growth is thanks to a rather unconventional product for the company.

2. Innovation: always ready with the next round

Boston Beer has experienced a growth renaissance thanks to its Truly hard seltzer brand. Management claims the beverage has reached 28% market share in the hard seltzer category and accounted for 40% of all growth. Shipment volume of Truly grew more than 100% in both 2019 and 2020. The company is doubling down, launching Truly iced tea and Truly punch this year.

Years before the the hard seltzer trend, the company was a pace setter in the hard cider movement. Sales of its Angry Orchard products have been slow in recent years, but it was a popular fast-growing product after it was introduced in 2012. Beyond the alternative beverages, Boston Beer has frequently introduced new beers tied to flavors, seasons, and styles. In 2019, management acquired Dogfish Head, a brewery known for its India Pale Ales (IPA). It was a good match between two large craft brewers. IPAs are a category that nearly left the Boston Beer behind in the early 2010s. Founder and chairman Jim Koch openly dislikes the taste and admits to approving every beverage that gets produced. Despite the recent success, the past decade illustrates how quickly fickle consumers can change their preferences.

The company has been able to navigate shifting tastes over the years and deliver a remarkable performance for shareholders. The stock is up about 1,000% in the past decade and 11,000% over the last 20 years. Despite the huge gains, it's still only a $12 billion company. It has no debt and has averaged a return on invested capital and return on assets of 20% and 15%, respectively, over the past five years. That puts it in the company of all-star stocks like Facebook, Lululemon, and Marketaxess. Similar to those stocks, exceptional financial performance doesn't come cheap.

In fact, the stock's price-to-sales (PS) ratio and multiple of cash flow from operations is almost triple what they were prior to the pandemic. That might seem wildly overvalued until you see revenue over the past two years has grown 26% and 39%. Compare that to the 2.5% average growth from 2014 to 2018 and the multiples seem more justified. 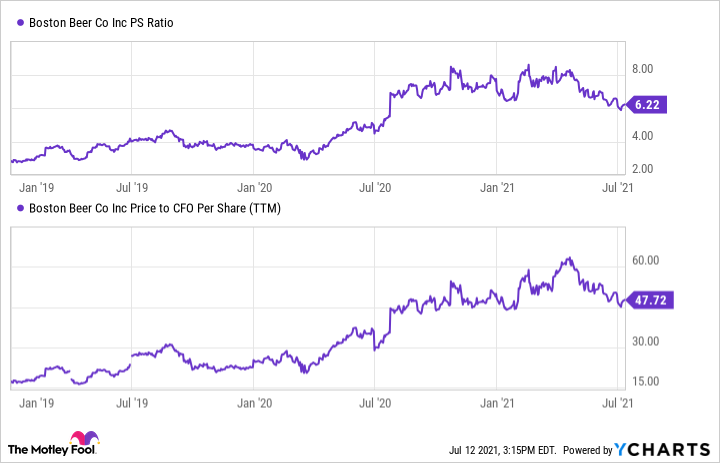 When Boston Beer was founded, craft beer was outside of the mainstream. By 1983, the top six beer makers had 90% market share. Now, the category may be one of the most crowded and fragmented consumer markets around.

Management has shown the ability to pivot to new products and expand its portfolio, but for now I'm keeping my position small. By allocating a mere 1% of my portfolio to the shares, I'm acknowledging the possibility that growth during the pandemic was an anomaly. That said, the company's Truly hard seltzer is growing too fast to ignore. As Boston Beer continues to round out its product offering, it's covering more consumer tastes. That should stabilize revenue regardless of how consumption habits shift. The stock may not be cheap, but it has all of the ingredients to have shareholders toasting big gains over the long term.