Arguably the best feature of Social Security is that its monthly payments adjust for inflation every year. Cost of living adjustments, or COLAs for short, get incorporated into Social Security checks every January, with the goal of keeping purchasing power for seniors constant even when prices rise.

Inflationary pressures have been almost nonexistent for decades. But over the past several months, inflation has roared back onto the scene with a vengeance, and it could result in Social Security recipients getting a boost of 5% or more come 2022 -- a raise the size of which the program has seen only once in the past 30 years. 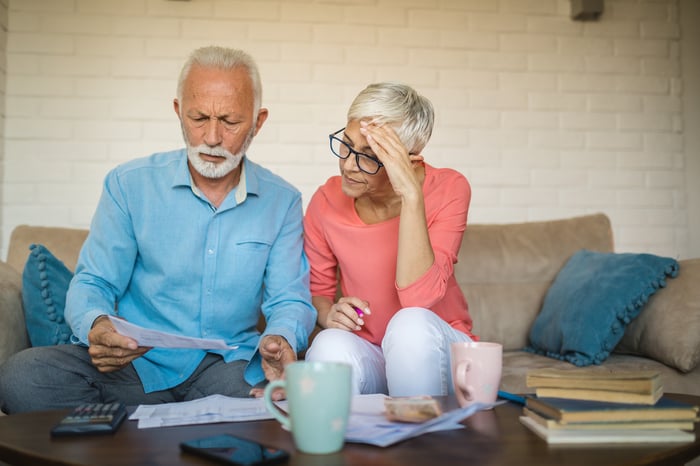 Another huge price increase in the U.S. economy

Fears about inflation started in March, when the Consumer Price Index rose 0.6% on a seasonally adjusted basis. Many thought that would prove to be a one-time aberration, but April's inflation report only got worse, with a rise of 0.8%. May's number returned to a more modest 0.6% rate, but it still marked a pronounced acceleration in price rises. Moreover, it seemed to establish a longer-term trend, even as many continued to hope inflationary pressures would soon disappear.

June's numbers were the worst yet for inflation fighters. The CPI rose 0.9% for the month, bringing the 12-month price change to 5.4%. That's the highest since 2008, and you have to go all the way back to the 1980s to see year-over-year price increases that high on a regular basis.

Again, the price increases were widespread. Some key items include:

Why a 5% COLA is now possible

A slightly different measure of inflation gets used for determining Social Security COLAs, and that number rose even more sharply. The CPI-W inflation index jumped 1.1% to 266.412. That brought its 12-month change to 6.1%.

June's number won't get used in calculating the COLA, but the CPI-W numbers for July, August, and September will. The three-month average will get compared to last year's corresponding average of 253.412.

If price levels were to remain exactly where they are over the next three months, then the COLA for 2022 would come in at 5.1%. With the exception of 2008's 5.8% COLA, that'd be the largest increase in benefits since 1990.

To match that 5.8% mark, the average CPI-W from July to September would have to come in about 0.6% higher than current levels. That might have seemed ambitious just a couple months ago, but all it would take is one more monthly rise in July similar to what we've seen from March to June to get to that level. From there, even flat prices would produce a COLA approaching 6%.

Why many seniors shouldn't be excited about bigger Social Security checks

Getting more in Social Security benefits is nice for those on a fixed income, but dealing with higher prices isn't. For those fortunate enough to have savings on top of their Social Security income, high inflation erodes the purchasing power of retirement nest eggs. Although the CPI doesn't match up perfectly with the actual mix of goods and services those on Social Security typically use, rising prices for food and energy will inevitably hit seniors' pocketbooks.

At some point, inflationary pressures will demand a response from the Federal Reserve. For now, though, policymakers seem convinced that inflation will go away. If that happens after the measuring period ends in September, then it's possible that higher monthly Social Security checks in 2022 might actually help boost standards of living for those who rely on them.