Just a few months ago, Embraer's (NYSE:ERJ) core commercial aviation business seemed to be in deep trouble. The company's order book had already started to sag before the COVID-19 pandemic hit. The pandemic made matters much worse by driving a spike in order deferrals and freezing new order activity.

Fortunately, a handful of airlines have started to place aircraft orders again in 2021. Boeing's long-suffering 737 MAX has been the biggest beneficiary. However, Embraer has also made much-needed progress on extending its backlog, including an order from Porter Airlines for at least 30 E195-E2s that was confirmed on Monday. 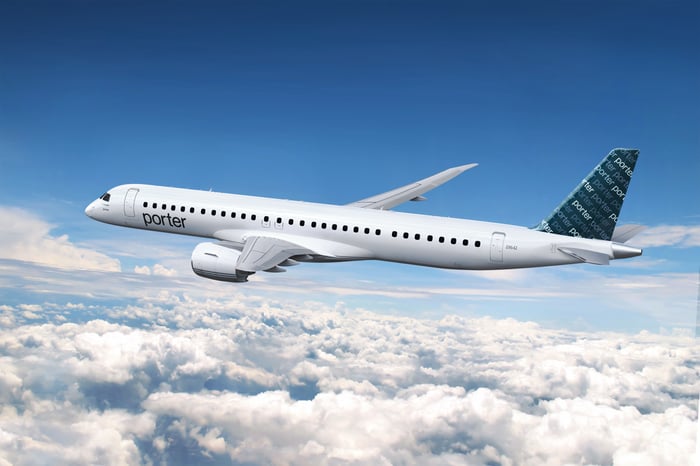 Porter Airlines is a Canadian regional airline that has historically operated most of its flights from a hub at Billy Bishop Toronto City Airport. Porter is the dominant carrier at Toronto City Airport, which is located on an island right near downtown Toronto. That has helped the airline appeal to business travelers, as the city's main airport (Toronto Pearson International Airport) is 15 miles further from downtown.

Toronto City Airport has two major drawbacks, though: It has very short runways and the city doesn't permit jets to operate there. That means Porter has to rely on a fleet of De Havilland Dash 8 turboprops, which fly slower and have less range than most jets. (The airline previously tried and failed to convince the city to extend the airport's main runway and lift the restriction on jets.)

As a result, Porter Airlines' nonstop flights have been limited to destinations within about 700 miles from Toronto. This has accentuated its business travel focus, as it can't serve popular leisure destinations like Florida, the Caribbean, the Rockies, and Las Vegas. That business focus caused the pandemic to hit Porter particularly hard. The airline suspended all flights in March 2020 and currently hopes to restart operations in September.

Now, Porter Airlines is planning a big change to its business model. On Monday, Embraer confirmed that the airline had ordered 30 E195-E2s, with purchase rights for 50 more. Porter intends to use those jets to fly from Ottawa, Montreal, Halifax, and Toronto Pearson to destinations it couldn't serve with its turboprop fleet -- probably with a heavy focus on leisure flying.

Another boost for Embraer's order backlog

Embraer reported the firm portion of Porter's order in late April as an order from an undisclosed customer. This week's announcement added more details about the delivery schedule as well as the purchase rights for up to 50 additional aircraft. 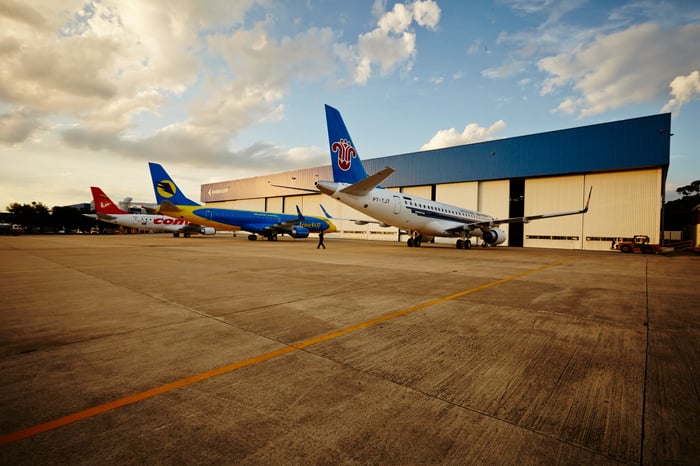 Notably, Embraer expects to deliver Porter Airlines' first E195-E2 in the second half of 2022. That's important because the aircraft manufacturer previously faced a big order gap next year. As of the end of March, Embraer had just 272 firm orders in its backlog, the vast majority of which are either set for delivery later in 2021 or won't be delivered for several years.

Last quarter, Embraer began to address that deficiency with orders for 17 E175s from Alaska Airlines and SkyWest (one of its regional affiliates). Embraer will deliver all but four of those E175s next year. The Porter Airlines order further bolsters the 2022 production skyline. If Porter's new strategy succeeds and the airline exercises all of its purchase rights, that would provide an additional lift toward the middle of the decade.

Still a long way from recovery

A few years ago, Embraer routinely delivered between 90 and 100 commercial jets annually: sometimes even more. Even at that level of production, the company struggled to stay profitable.

Embraer's recent orders will keep production running, but probably at around half of the pre-pandemic rate. In effect, the company has merely bought itself time to scrounge up new orders and return to a healthier production rate within two or three years.

Looking ahead, investors shouldn't underestimate the difficulty of rebuilding the order backlog to a level that would support pre-pandemic production rates. For years, Embraer has had trouble convincing airlines to choose its aircraft over larger, more-established offerings from Airbus and Boeing. If anything, the pandemic will make it harder to break through and reestablish a viable commercial jet business.