Do you want to buy a cheap stock?

A glance at the market will reveal all sorts of stocks at all sorts of valuations. Some are much more desirable than others, and the unwanted tend to be super cheap. If Wall Street is right on stock prices on any given day, the amazing companies also tend to have really expensive stock prices. Likewise, cheap stocks tend to represent mediocre -- and occasionally atrocious -- companies.

Ah, but sometimes the stock market is wrong. There are truly awful companies, teetering on the edge of bankruptcy, with stock prices that are actually expensive (and best avoided). And what's really exciting is when the reverse is true. What do you do when you find an incredible company, and the stock is cheap? Let's take a look at two of these cheap stocks. 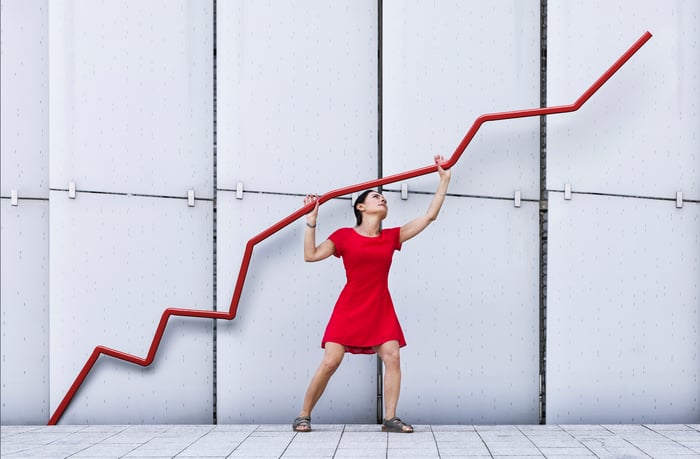 Carvana and eXp World offer an exciting opportunity. These two companies are using their internet knowledge to move a couple of massive retailing sectors -- automobiles and real estate -- online. These companies are both enjoying triple-digit percentage revenue growth and that is helping elevate their stock prices. Despite these wonderful gains, the stocks are still cheap.

Carvana has a price-to-sales (P/S) ratio of 3.3, and eXp World is even cheaper at 2.8. Let's compare these stocks with some other high-flyers that are doubling revenues. For instance, there's MercadoLibre and Snowflake, as well as Sea Limited and Olo. All six of these companies have triple-digit percentage revenue growth. But you'll notice some stocks are cheaper than others.

Numbers from Yahoo! Finance. Sales growth is from the most recently reported quarter. TTM = trailing 12 months. YOY = year over year.

It's typical for fast-growing tech stocks to have high multiples. Wall Street loves Snowflake, for instance. That's how a company with $700 million in annual revenue gets a $70 billion valuation. And Wall Street dislikes eXp World and positively hates Carvana. You can see this emotion in the percentage of the available shares that are sold short (called the float).

Approximately 24% of Carvana's float is sold short. That's high enough to make it one of the most shorted stocks on the major exchanges. Why are so many on Wall Street negative on Carvana?

The "just a retailer" attitude creates an investing fallacy

Back in the 20th century, many Wall Street observers were hostile to Amazon (NASDAQ:AMZN), that internet retailer with amazing growth rates. "All they do is sell things," people would say. "All they do is sell books." And the bears would compare Amazon to Barnes & Noble, and argue that Amazon was vastly overvalued compared to its competitors.

Ah, but the market misunderstood the nature of the competition. Amazon was an internet retailer, and ultimately the "internet" part of the equation was vastly more important than the "retailer" aspect.

Software companies like Olo and Snowflake have high multiples because tech stocks are asset-light businesses that are extremely profitable when the business is mature. Retailers are notorious for having slight margins. Many people view retailers as commodity businesses. Brand is the only thing that distinguishes retailers from each other. A retailing business can be easily copied, thus driving margins lower and lower.

Amazon changed all that. It was an internet business. And we discovered that first-mover was incredibly important. Amazon built up a powerful mindshare, and this translated into a brand with an impregnable moat. It was very difficult for the market to appropriately value Amazon. While at the time many observers thought the company was overvalued, it was actually undervalued for years and years.

Flash-forward a couple of decades and we have Carvana and eXp World bringing two major retailing market holdouts -- automobiles and real estate -- online. Once again, the market is having trouble setting an appropriate valuation to internet retailers.

The lesson of Amazon still holds true. The internet aspect of the business is far more important than the retailer aspect. These companies are developing powerful brands. Mindshare is already creating a moat. Compare Carvana to its rivals, for instance, companies like Vroom, CarGurus, and Cars.com. It is hard to compete with a first-mover that takes advantage of its lead.

Numbers from Yahoo! Finance. Sales growth is from the most recent quarter. TTM = trailing 12 months. YOY = Year over year.

Now think about the internet and real estate sales. eXp World can expand its footprint around the world almost overnight. Realtors that have a brick-and-mortar mindset are simply failing to keep up. The internet is faster, better, and cheaper. Carvana and eXp World are not tech companies, but they are using technology to transform huge markets, and as top dogs and first movers they are reaping the whirlwind. 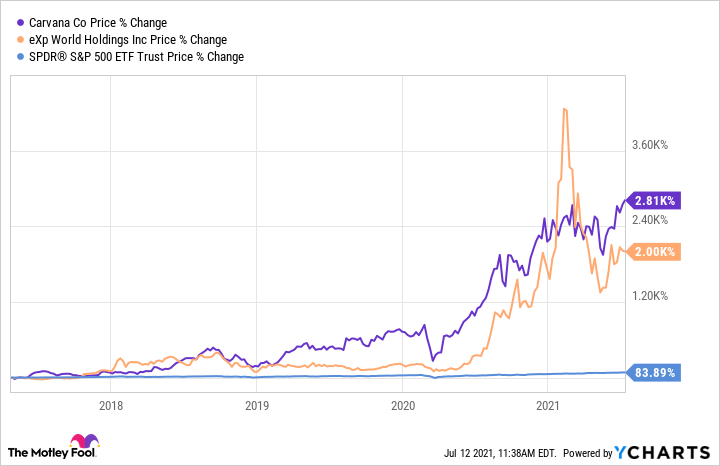 Consider too that eXp World is morphing into a tech company. It acquired Virbela, a company that creates virtual worlds online. eXp World uses Virbela for its own in-house purposes, to facilitate meetings online. But the company is also offering the technology to anybody who wants to use it. This is similar to how Amazon morphed from an internet retailer to a company that rented out its tech to other companies.

Carvana and eXp World are cheap stocks not because they are bad businesses. These are cheap stocks because the market does not know how to value these businesses, and helplessly (and wrongly) classifies them as a used-car dealer and a real estate broker, respectively. This misses the story and the value of these two companies.

I believe these will be massive companies going forward, and the cheap price makes these stocks two of the best buys on the market today.