fuboTV (NYSE:FUBO) has stood out among an increasingly crowded field for virtual multichannel video programming distributors (vMVPDs), including DISH Network's Sling TV and Alphabet's YouTube TV. The stock price has nearly tripled in value since its initial public offering last year on the back of strong subscriber growth.

While some might see vMVPDs as the answer to costly cable plans, investors' path to riches with fuboTV is not entirely clear. There's still the question about where fuboTV fits in the broader streaming market over the long term, where many people may find more value sticking with subscription video on demand (SVOD) services. 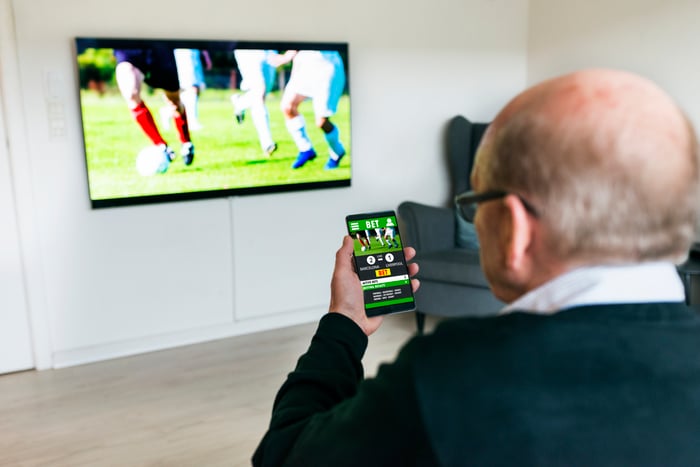 fuboTV is a relatively small company, with a market cap of $3.9 billion and trailing-12-month revenue of $330 million. The company's strategy to provide the most competitive sports lineup is working very well so far. Subscription revenue, which is its primary revenue source, grew 73% in 2020 to reach $230 million. fuboTV added 43,000 net subscribers in Q1, bringing the total to 590,000.

To fend off rivals, which also include well-financed entertainment heavyweights like Walt Disney's Hulu Live, fuboTV is doubling down on people's love of live sports. In April, it announced an exclusive streaming rights deal for the Qatar World Cup 2022 Qualifying matches of the South American Football Confederation. In its annual report, the company says, "With more than 3.5 billion soccer fans worldwide, in addition to all other sports fans and TV viewers, we believe there remains a significant opportunity to expand internationally."

fuboTV's ability to post high rates of growth in 2020 shows a winning formula of reeling subscribers in with sports and retaining those users with news and entertainment. This shows that many users are finding value in its growing news and entertainment lineup, but the growing appeal of SVOD services are a threat, specifically those that offer live sports streaming like Disney's ESPN+ and ViacomCBS' Paramount+.

The problem with vMVPD services is that they are not that different from cable. fuboTV offers more than 100 channels (all the sports you could want) for $65 per month. But this a la carte bundling of dozens of channels for a monthly fee is exactly why many people are cutting the cord in favor of SVOD services.

SVOD subscriptions are expected to reach nearly 1.5 billion in five years, or an increase of 65% from 2020 levels, according to Digital TV Research. While vMVPDs are benefiting from cord-cutting, the overall market is still growing slower compared to SVOD, with vMVPD subscriptions increasing by just 2.1% in 2020.

fuboTV believes that in the long run people will grow tired of managing multiple SVOD subscriptions and will opt for a vMVPD service that combines sports, news, and entertainment. Some Wall Street analysts are skeptical, since vMVPDs present the bundling frustrations that have caused consumers to dump cable, but fuboTV's growth so far shows it might be onto something.

Investors should tread carefully with fuboTV

Based on the strong start to the year, management expects full-year revenue to increase between 99% and 103% year over year in 2021. Those are certainly millionaire-making returns, especially if fuboTV can continue growing its digital ad revenue. In the first quarter, advertising revenue grew 206% over the year-ago quarter, although it's still a very small slice of fuboTV's total revenue.

What's more, fuboTV is angling to offer additional services to make its platform even stickier to stand out from other vMVPDs that are simply offering the usual cable channels over the internet. fuboTV completed the acquisition of Vigtory earlier this year, setting the groundwork for its aggressive push into online sports betting -- a market estimated to be worth $155 billion by 2024, according to Zion Market Research.

The main risk I would watch is consumers getting burned out with vMVPDs the same way they did with bundled cable plans. But if you're comfortable taking the plunge on fuboTV, I would start a small position in the stock and look to add shares gradually, but only if the company continues to add subscribers at a good clip. Obviously, if the consumer appetite for bundled live sports packages remains strong as it has so far, this could be a millionaire-making streaming stock.

Could fuboTV Be a Millionaire-Maker Stock? @themotleyfool #stocks $FUBO Next Article
Current