eBay (NASDAQ:EBAY) and PayPal Holdings (NASDAQ:PYPL) were once considered inseparable. Even after spinning off PayPal in 2015, eBay continued to use PayPal's payment processing services.

That all changed in early 2018 when eBay decided to replace PayPal with a smaller Dutch competitor, Adyen (OTC:ADYE.Y), as its primary payment processor in a three-year transition. That announcement stunned PayPal's investors and thrust Adyen, then a private company, into the spotlight. 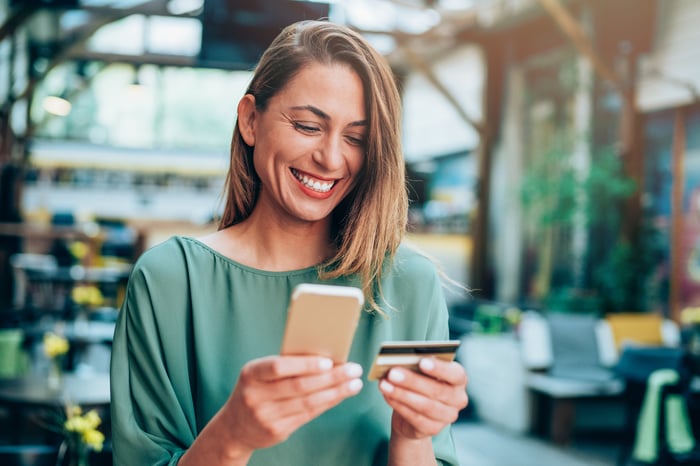 Smaller and simpler than PayPal and Square

Adyen's platform is also simpler. It doesn't provide cryptocurrency trades or peer-to-peer payments, as PayPal and Square do within their apps, and it doesn't offer any stock trading services like Square's Cash App. It also hasn't adopted Square's practice of putting Bitcoin (CRYPTO:BTC) on its own balance sheet.

Adyen generated most of its revenue in Europe last year, but it's gradually expanding across North America, Latin America, and Asia. That geographic diversification makes it more similar to PayPal than Square, which generated 97% of its revenue within the U.S. last year.

How fast is Adyen growing?

Adyen was founded 15 years ago, and its simpler approach to the fintech market attracted $266 million in three funding rounds as a private company.

Unlike many other fintech companies, Adyen generated stable profits for several years prior to its market debut. That's why it didn't issue any new shares during its IPO -- its shareholders merely sold their existing shares, equivalent to 13.4% of the company, to institutional investors.

If we examine Adyen's revenue, processed payment volumes, EBITDA, and net income growth over the past three years, we'll see why it attracted a stampede of bulls.

Adyen could eventually grow into its valuations

Those frothy valuations indicate lots of growth is already priced into Adyen's stock. PayPal is growing slower than Adyen, but its stock trades at about 50 times forward earnings and 14 times this year's sales.

Square is growing faster than Adyen thanks to its rising Bitcoin revenue, but it trades at 115 times forward earnings and six times this year's sales.

Investors shouldn't fret too much over the near-term valuations of growth stocks, but Adyen could underperform PayPal and Square -- as it did over the past 12 months -- until it grows into its valuations.

However, the global fintech market could still grow at a CAGR of 23.4% between 2021 and 2026, according to Market Data Forecast, so Adyen, PayPal, and Square could continue to attract investors with their different fintech strategies. Adyen in particular could remain an attractive choice for investors who think PayPal is too big and Square is too dependent on Bitcoin and the American market.