Please ensure Javascript is enabled for purposes of website accessibility
Log In Help Join The Motley Fool
Free Article Join Over 1 Million Premium Members And Get More In-Depth Stock Guidance and Research
By Bram Berkowitz - Updated Jul 16, 2021 at 10:07AM

The bank reported elevated expenses for the fourth quarter in a row. It's struggling to eliminate COVID-19 expenses and it dealt with some one-time costs in the quarter.

In the second quarter, Bank of America (BAC 1.68%), the country's second-largest bank by assets, once again reported higher expenses than investors and analysts were hoping for, especially for a bank of such high caliber. While some of that can be attributed to one-time items and COVID-related expenses, this is now the fourth quarter in a row that expenses have been uncharacteristically high.

Let's take a look at the high expense levels and see if this is part of a growing problem, or if it will pass in the coming quarters. 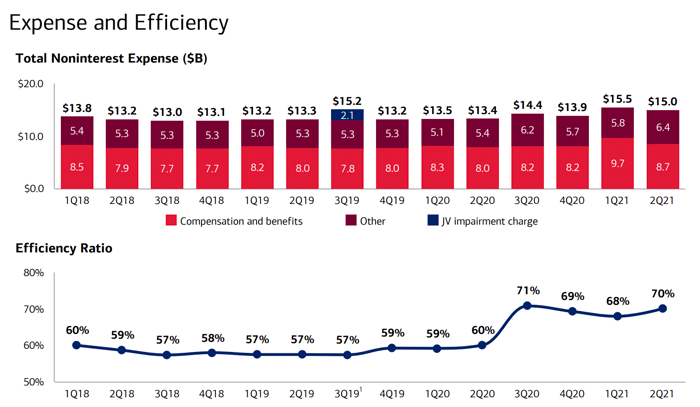 As you can see, the efficiency ratio has been between 68% and 71% over the past four quarters, while quarterly expenses have been $15 billion or above the past two quarters.

In the second quarter, there were some one-off items including a $500 million contribution to the bank's charitable foundation plus roughly $300 million of expenses associated with processing transactional card claims related to state unemployment benefits. If you remove that $800 million, the bank is close to the guidance management provided in the first quarter of the year, that expenses in Q2 would be somewhere in the low $14 billion range. Management also said it expected expenses for the year to come in at $56.5 billion to $57 billion for the year, higher than the $55 billion in expenses in 2020. 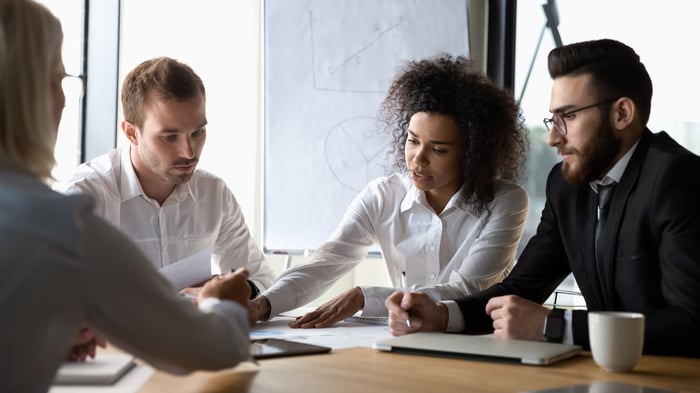 Looking at expenses and where they are trending this year, it's hard not to be disappointed. For one thing, that target of $57 billion in expenses for the year is looking like a best-case scenario right now.

Also, as one analyst pointed out on the second quarter earnings call, it's not like Bank of America hasn't done a great job of investing in technology over the years. The bank reported a record number of digital users and households, and strong growth in digital sales. But these investments in technology and success in digital are supposed to translate into benefits for expenses and not a 70% efficiency ratio.

Lastly, Bank of America's other high-performing peer, JPMorgan Chase, has managed to keep its efficiency ratio below 60% for the past five quarters. They're different banks with different models, but it's not as if JPMorgan didn't have to deal with the pandemic.

On the other hand, I will cut Bank of America some slack for a few different reasons. As CFO Paul Donofrio said in the first quarter, while COVID-related expenses have been stickier than the bank anticipated, "they're going to come out, there's no question about that." Additionally, it's pretty clear that the bank is working to keep expenses down. Donofrio said that if the bank makes no effort to curb costs, they will automatically rise 3% to 4% per year, but the bank's goal is to only have them rise at a 1% rate.

Donofrio also pointed out the bank reduced its headcount by 2,500 employees in the second quarter. Interest rates are still at historic lows, and Bank of America is one of the most asset-sensitive banks, meaning more of its assets reprice with interest rates than liabilities. With a parallel 1% increase to both short- and long-term interest rates, the bank would reap an additional $8 billion of net interest income on its loans and securities over the next year without having to do too much. That will greatly increase revenue, the denominator of the efficiency ratio, which should push the efficiency ratio down further.

Have faith in management

While I would like to see more progress on expenses, Bank of America is run by a very experienced management team. The bank's chairman and CEO, Brian Moynihan, and Donofrio both have the full support of legendary investor Warren Buffett, whose company, Berkshire Hathaway, owns more than 11% of the bank. COVID-19 derailed much of the bank's work and plans around expenses, but things should start to improve in the back half of the year and certainly in 2022.

And if you don't believe me, then perhaps trust the broader market this time around. Bank of America, even after another rough quarter of expenses, still trades around 180% tangible book value (equity minus intangible assets and goodwill) at Friday's prices, and a bank wouldn't trade at that high a valuation if it truly operated with a 70% efficiency ratio.