With negotiations around an infrastructure bill in full swing and earnings season around the corner, here are three great picks to bet on infrastructure.

An infrastructure bill may soon become a reality, given how relentlessly President Biden is working to sign his multitrillion-dollar plan into law, and that's the only trigger infrastructure stocks now require to hit the next leg of their rally. I have three infrastructure picks on my radar this July: two top stocks that are about to report earnings and one exchange-traded fund (ETF) that's a fantastic way to play the infrastructure spending theme thanks to its size and diversity.

One common theme across its portfolio is that most of its assets are regulated or contracted. That means all Brookfield Infrastructure does is acquire and operate quality assets and churn its portfolio periodically to replace mature assets. In between, those assets generate steady cash flows for the company to support growth and dividends. In fact, Brookfield Infrastructure hasn't just paid out regular dividends but increased them every year so far -- between 2009 and 2021, its dividend grew at a compound annual rate of 10%, driven by 16% CAGR in its funds from operations (FFO). 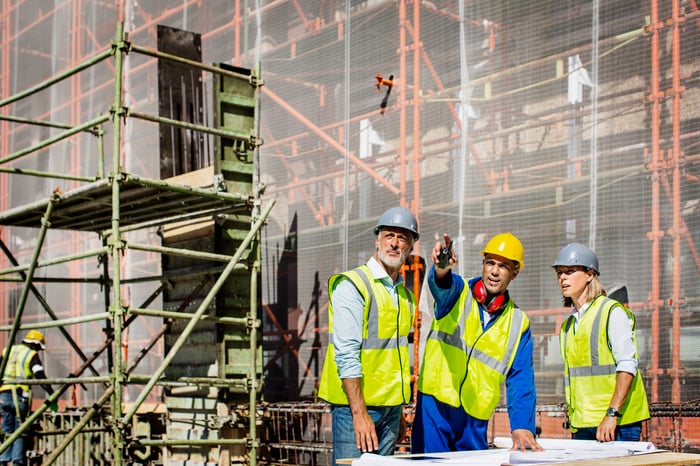 Although it has an extensive international footprint, North America is its largest market; and Brookfield Infrastructure's history suggests it wouldn't leave a chance to bag opportunities as infrastructure spending in the U.S. kicks off. Its ongoing quest to acquire Canadian oil infrastructure company, Inter Pipeline (IPL) even as oil prices continue rally is a fine example of the company's hunger for growth.

A record earnings report is on its way

The primary motive of an infrastructure plan is to modernize and rebuild bridges, highways, roads, ports, airports, and transit systems, and most of it wouldn't be possible without the use of steel. That largely explains why steel stocks have shot through the roof this year. The rally still has legs as infrastructure spending is yet to take off, so if you must play the infrastructure theme, consider steel stalwart Nucor (NUE 0.70%). Nucor is the largest manufacturer of steel and steel products in the United States.

The price of hot-rolled steel coils -- a key product used in construction -- is hitting record highs even as I write this as demand for steel is already on a roll. Rising steel prices bolted Nucor's first-quarterly net income to a record high on 33% growth in sales.

Nucor isn't done just yet: It will release its second-quarter earnings in the coming days, and should report yet another record quarter. With Nucor also boasting a strong balance sheet and increasing dividend every year for the past 48 consecutive years, it's among the few Dividend Aristocrat stocks primed to benefit directly from an uptick in infrastructure spending.

The only infrastructure ETF you should pay attention to

Whether it's steel, heavy machinery, construction materials, railroads, engineering services, energy infrastructure, or even industrial conglomerates that serve infrastructure industries, the Global X U.S. Infrastructure Development ETF has all of these and more. To give you an idea, here are just some of the stocks the ETF held as of July 14:

Given that diversity and a pretty low expense ratio of 0.47%, this ETF looks poised to generate solid returns once Biden's infrastructure spending program take off. It's an unconventional pick, and a perfect addition to a portfolio of some other traditional infrastructure stocks that could win big under the Biden administration.