Walt Disney (NYSE:DIS) is bouncing back from the devastating effects the COVID-19 pandemic had on its business. The House of Mouse had to shut its doors to theme parks, hotels, and resorts, delay releasing movies to the big screen, and stop cruise ship sailings.

The combination caused revenue and profits to crater in 2020. Thankfully, economies are reopening worldwide, and folks are proving eager to return to life outdoors. Disney is flexing its pricing power on its products and services with all the pent-up demand ready to be released. 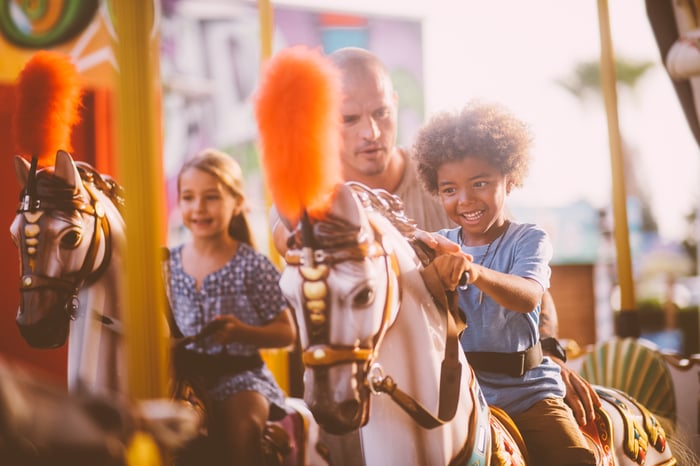 One of the bright spots for Disney during the pandemic has been the ultra-successful expansion of Disney+. The service was launched in 2019 and has quickly grown to reach 103.6 million subscribers. The rapid adoption and customer satisfaction gave management the confidence to raise prices on the service starting in March. Monthly prices for the service will jump between $1 and $3 worldwide, depending on the country.

Additionally, Disney will be raising prices on one of its other streaming services, ESPN+. Starting in August, monthly prices will go up by $1 and annual prices by $10. The all-American service has 13.8 million subscribers.

Disney CEO Bob Chapek is not worried about losing customers because of price increases. Here's what he had to say on the matter:

We're really thrilled with the price-value relationship that we offer consumers. I think that's born out by the fact that, in the US, when we took our first price increase, we didn't really observe any significantly higher churn than we had been seeing. And internationally, when we did the price increase there, we also added the Star content at the same time as a sixth brand tile and we actually saw an improvement in our churn rate, more retention. So I think that really says something about the price-value relationship.

Moreover, Shanghai Disneyland will be raising ticket prices by up to 10% next year. The park, originally opened in 2016, was one of the first to reopen since the pandemic.

And Disney is trying a different type of price increase at its Paris theme park. It's going to allow guests to purchase premium-access passes costing between 8 and 15 euros. The pass will allow impatient guests to skip lines for rides entirely. If successful, Disney could roll it out to the rest of its theme parks sometime later.

With its hands tied behind its back by coronavirus lockdowns and social distancing policies, Disney's revenue decreased by 6.1% in fiscal 2020. Now, with economies reopening worldwide, folks are eager to return to entertainment options outside the home. Understandably, folks want to get out after being cooped up at home for the better part of a year. That could allow Disney to implement the price increases at theme parks without suffering a large drop-off in visitors.

Investors looking for a company that's going to benefit from economic reopenings should not overlook Disney.