Apple (NASDAQ:AAPL) is throwing its hat into the ring in the bidding war for the NFL's Sunday Ticket package, according to a report from The Information. Sunday Ticket includes every out-of-market game, and it's currently only available to AT&T's (NYSE:T) DirecTV subscribers.

Apple isn't the NFL's only suitor, though. Other big streaming companies with deep pockets, including Amazon (NASDAQ:AMZN) and Disney (NYSE:DIS), are also interested. Do the expensive sports rights make sense for Apple? 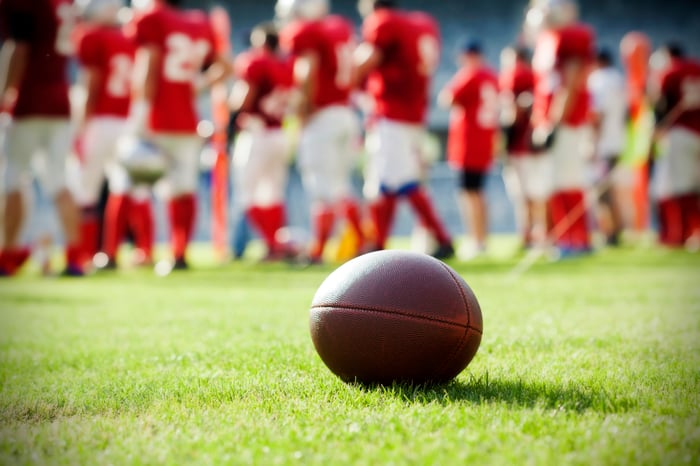 When DirecTV renewed its Sunday Ticket contract with the NFL in 2014, it reportedly paid $1.5 billion per year. At the time, it had about 2 million subscribers paying $300 per year for the package. It doesn't take an advanced mathematics degree to see DirecTV took a loss on its deal with the NFL to the tune of hundreds of millions of dollars every year.

That was confirmed in AT&T's disclosures regarding its planned spin-off of DirecTV. AT&T will eliminate $2.5 billion of losses from Sunday Ticket in the deal.

If the NFL's deals to renew its contracts with the broadcast networks and Amazon earlier this year are any indication, the price has gone up. The average of those contracts increased more than 66% from the previous round. The pricing pressure is exacerbated by the fact that the rise of streaming has likely brought in additional interested parties beyond traditional TV distributors for the Sunday Ticket package.

Whoever wins the package could end up paying more than $2.5 billion per year.

Apple certainly has the cash to afford the Sunday Ticket package, but it's unclear how the iPhone maker could really benefit from adding NFL games to its list of offerings.

If Apple buys the rights to NFL Sunday Ticket, it would likely be an add-on for Apple TV+ or perhaps the Apple One subscription, which offers multiple tiers of bundled services. But Apple has already invested billions of dollars into content for its video streaming service without much to show for it.

While it may have millions of viewers, only a handful are actually paying for Apple TV+. The company strategically ended most of its early free trials this month, coinciding with the season 2 premiere of the successful Ted Lasso, New Apple device customers only get a 3-month trial now, indicating it's starting to see some traction.

The goal, however, isn't to make money directly from Apple TV+ subscriptions; it's to sell more iPhones and Apple One subscriptions. And spending on original content instead of licensing NFL rights may be a more efficient way to drive customers to those end results.

A deep library of original content with broad appeal will attract more customers than access to every Sunday NFL game during the season. Apple wants tens of millions of subscribers, not a couple million.

Building a compelling library of original content just takes time. Netflix has a decade head start and Disney's 100 years ahead.

Amazon or Disney's ESPN are much better fits than Apple for the Sunday Ticket package. Both already have existing deals with the NFL for weekday football games, and thus already market their services toward NFL fans. What's more, they each stand to benefit more directly from additional subscribers to their services.

Amazon could require a Prime membership for access to Sunday Ticket subscriptions, adding it as another Prime Channel on its service. Each new Prime member Amazon signs up or each member it retains represents significant value for the online retailer.

Meanwhile, Disney has an opportunity to offer Sunday Ticket through its ESPN+ subscription. It recently raised the price of the service to $7 per month or $70 per year after raising the price for its UFC pay-per-view again earlier this year. Management previously forecast ESPN+ would become profitable as a stand-alone business by 2023, reaching 20 million to 30 million subscribers. Adding Sunday Ticket can help it reach that scale and improve engagement with premium content.

The competition has more incentive than Apple to buy the rights to NFL Sunday Ticket and the deep pockets to win the bid. But, in my opinion, it wouldn't be the worst thing in the world if Apple didn't win the streaming rights.