The Xbox Game Pass line of service offerings has set Microsoft (NASDAQ:MSFT) years ahead of the competition in video game streaming and cloud gaming services. Xbox Cloud Gaming allows players to use Game Pass across different non-Xbox devices and is included with Game Pass Ultimate at only $14.99/month, one tier up from the standard Game Pass streaming service for use with Xbox hardware.

This development is important for the company because selling consoles is a notoriously unprofitable business, and it's important for entry-level gaming customers because streaming can significantly lower the barriers to entry for gaming when the prices of consoles, games, and accessories are accounted for.

Don't get me wrong -- consoles aren't dead. But Microsoft is in the perfect competitive position to take advantage of the undeniable rise of game streaming and cloud gaming in a way that complements its position in the console market. 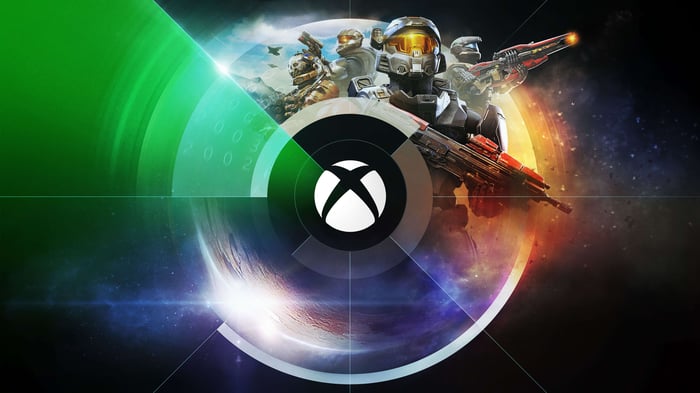 Xbox surrendered the console war and started a more important one

Many believe Microsoft's Xbox and Sony's (NYSE:SONY) PlayStation to be in direct competition, but the companies are in many ways no longer playing the same game. PlayStation is generally believed to have a more robust lineup of exclusive, narrative-driven game franchises than Xbox -- for example, God of War, The Last of Us, and most Uncharted titles. Considering this strength, the company focuses more on promoting its games and consoles than on promoting PS Now, its cloud gaming Xbox Game Pass competitor.

On the other hand, Xbox is boosting its exclusive game lineup to complement its relative strength in broad game streaming and cloud services. The company announced 27 new games to be included with Xbox Game Pass at this year's digital E3 gaming showcase. This heightened focus on exclusive content (in partnership with Microsoft's recently acquired popular gaming studio Bethesda Games) is all part of the plan to add value to Xbox Game Pass, thereby gaining subscribers who may or may not purchase an Xbox console at all.

Both companies don't often report their subscriber counts. However, according to Forbes, Xbox Game Pass currently boasts about 23 million subscribers and is likely to reach 30 million by the holiday season of 2021 following the release of Halo Infinite.The gaming industry has long expected PlayStation to release a more directly competitive game streaming service in response to Xbox Game Pass. However, PS Now is still the company's only cloud game streaming subscription -- with a subscriber base of just 3.2 million, as last reported by the company in May 2021.

Why you should bet on cloud gaming

Cloud gaming and game streaming services were always destined to become mainstream at some point. It's happening now because companies with powerful, large-scale cloud networks are making it actually work. Streaming games from the cloud to a piece of hardware you already own usually makes more sense in terms of affordability and convenience than buying a $500 console and accompanying games that you can only use on one stationary device -- especially for entry-level gamers who hesitate to make a large upfront financial commitment to gaming.

While Sony hasn't hopped on the cloud gaming bandwagon, companies that have launched their own cloud-based game streaming services include Google (Stadia), NVIDIA (GeForce Now), and Amazon (Luna). However, each service has a different offering structure from Xbox Game Pass (for example, you'll need to buy your games individually on an existing platform to use GeForce Now).

More companies will hop on this trend, and Xbox can easily use the market leadership it holds over the competition now in video game streaming to dominate the cloud gaming market as it develops. We are just at the beginning of this growth story, with Xbox planning to release non-console hardware like streaming devices and Game Pass-enabled smart TVs to make cloud gaming at home even more widely adopted.

According to Fortune Business Insights, the global cloud gaming market is projected to grow from $169.2 million in 2021 to $1.9 billion in 2028, at a staggering compound annual growth rate (CAGR) of 40.9%. As Microsoft rolls out its aforementioned streaming hardware, takes advantage of strategic acquisitions like Bethesda for a stronger game lineup, and utilizes its huge Game Pass user base, it will become clear why console sales were never the end goal for Xbox.

Keep your head in the cloud

Stay tuned for Microsoft's July 21 earnings report, in which the company will hopefully disclose more information about Xbox and Game Pass performance in particular. Look for a Game Pass subscriber base of around 25 million (or more) and any additional detail on plans for Game Pass-enabled smart TVs and streaming devices.

I don't expect much financial information specific to Xbox Game Pass quite yet, though. The company is likely playing the long game on its path to profitability while it prioritizes beefing up its game lineup and continuing rapid subscriber growth. Considering the company's existing position as one of the big three public cloud giants and as a trusted growth stock, this growth story is one to watch as a Microsoft shareholder -- not from the sidelines.