Elanco Animal Health (NYSE:ELAN) just announced another acquisition after its deal to acquire Bayer Animal Health last year. This time, the animal health company is purchasing Kindred Biosciences (NASDAQ:KIN) for $440 million. Kindred focuses on dermatology treatments for dogs and cats. Elanco doesn't have a dermatology portfolio today, and management hopes this acquisition can catapult it into a growing new area of pet healthcare.

What is Kindred Biosciences?

A small pet pharmaceutical company, Kindred has a pipeline of drugs under development but no products in the commercialization phase, meaning it does not yet generate meaningful revenue or earnings. However, the company's management believes that three of its drugs in development have potential to bring in more than $100 million in annual revenue each. 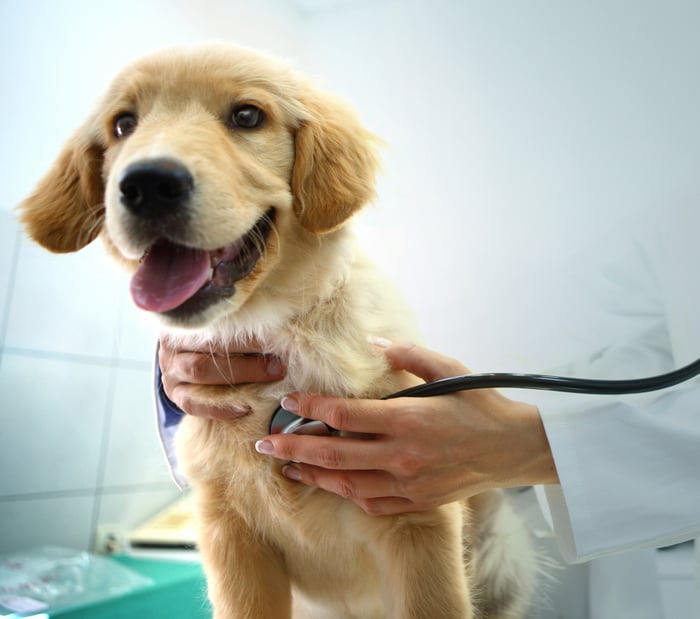 The three drugs -- tirnovetmab, KIND-039, and KIND-032 -- all fall within the dermatology category. Tirnovetmab is farthest along in the approval process, targeting regulatory approval in 2022 with possible USDA approval by 2023.

Kindred has a few other drugs in development, including KIND-030, a monoclonal antibody that targets the deadly canine parvovirus. Recent results from an efficacy study of KIND-030 in dogs infected by parvovirus showed that the drug lowered mortality rate to zero in the treatment group. Approval could come as early as the end of this year.

By making this acquisition, Elanco has validated Kindred's drug pipeline. As a sophisticated, strategic buyer, Elanco almost certainly studied the science behind Kindred's portfolio before striking a deal. And while Kindred doesn't generate much revenue today, it will have significant potential once its development pipeline moves into commercialization.

In a presentation to investors announcing the acquisition of Kindred, Elanco noted that it expected the deal to contribute an estimated $600 million to $700 million to annual revenue by 2025. This is a decent ramp-up from less than $10 million in revenue today, but Elanco has agreed to pay $440 million for that estimated revenue. Of course, the revenue expectation could go higher or lower depending on whether Kindred's drugs are approved by regulators and how well they sell.

If Kindred is expecting its drug portfolio to yield such fantastic results in the next five years, why would it agree to be acquired? Well, developing drugs and commercializing drugs are two different skills. Kindred may be good at research and development, but may lack the right expertise to scale up pharmaceutical production and market successful treatments to veterinarians. Elanco, on the other hand, is highly experienced in drug commercialization and can certainly execute on that mission once the drugs are approved.

Kindred is also operating with a $50-million-per-year loss, which means it is burning cash until it can start selling its products. By selling to Elanco, Kindred is transferring the financial risks (having enough money), the pipeline risks (ensuring drugs are approved), and the execution risks (commercializing the drugs), to Elanco. Kindred does lose some of its own upside potential if sales of its drugs really do reach the stratosphere, but it has secured a nice sum today for much less risk of failure tomorrow.

Elanco intends to fund the acquisition with debt. It already has $5.7 billion in net debt on its balance sheet, with a net-debt-to-EBITDA ratio of more than 5. Adding more debt from an acquisition that will not immediately add to earnings will only increase the company's leverage, which is a key investment risk that investors should monitor.

If Kindred's drug pipeline meets expectations, the deal will be a home run for Elanco. Once in the commercialization phase, pharmaceutical drugs are high-margin products. At $700 million of potential annual revenue, the acquisition could add more than $100 million in EBITDA per year, assuming Elanco's current margins remain intact.

Elanco is an experienced acquirer, and the purchase of Kindred Biosciences adds another interesting product line to its animal pharma portfolio. The best-case scenario would be for Elanco to repeat the success that its arch-rival Zoetis has seen. Zoetis has a dermatology portfolio nearing $1 billion per year in revenue.

As with all of Elanco's acquisitions, this one certainly comes with risk. The company has a significant amount of debt on its balance sheet and requires regulatory approval for several drugs before they can be commercialized. However, there are a lot of gains to be had for the pet healthcare giant if everything lines up.