Nvidia (NASDAQ:NVDA) is one of the world's most talked-about chipmakers. It's the market leader in gaming GPUs, its top-tier GPUs process AI tasks for data centers and driverless cars, and its Arm-based CPUs power gaming consoles, set-top boxes, and servers.

However, Nvidia has seemed to dominate headlines more frequently than many other chipmakers over the past year. Let's delve into the five main reasons everyone has been talking about Nvidia. 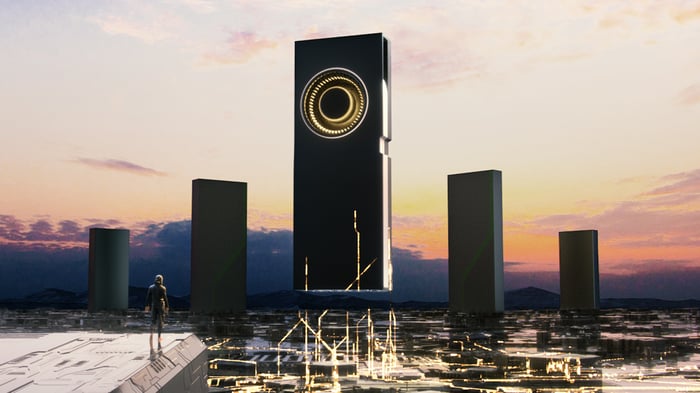 1. Its proposed purchase of Arm Holdings

Nvidia agreed to buy Arm Holdings, one of the world's largest chip designers, for $40 billion from SoftBank last September. Arm doesn't manufacture any chips, but it licenses its designs to chipmakers like Qualcomm and Apple. Arm-based chips now power over 95% of the world's smartphones.

If Nvidia buys Arm, it will support the development of its current Arm-based CPUs (including Tegra and the data center-oriented Grace) and new CPUs. But this acquisition won't close anytime soon, due to antitrust probes, opposition from rival chipmakers, and a lengthy legal battle against Arm China's CEO Allen Wu -- who is refusing to resign even after being ousted.

New developments in this messy takeover attempt could keep Nvidia in the headlines -- and raise questions about its long-term goals.

Nvidia is a fabless chipmaker that outsources the production of its chips to Samsung and Taiwan Semiconductor Manufacturing (NYSE:TSM). Therefore, the global chip shortage -- which started before the pandemic but was exacerbated by the crisis -- will impact its ability to meet the market's demand for new chips.

During last quarter's conference call, Nvidia CFO Colette Kress warned that it would "remain supply constrained into the second half of the year." Analysts still expect Nvidia's revenue to jump 49% this year, thanks to robust demand for its gaming and data center GPUs, but its growth rates would likely be even higher if it weren't facing a global chip shortage.

When cryptocurrency prices surged in 2017, many miners hoarded Nvidia's gaming GPUs, which resulted in a market shortage and high prices for PC gamers. But when crypto prices plunged in 2018, those miners sold their used GPU cards at lower prices, which flooded the market with excess inventories and curbed demand for Nvidia's newer GPUs.

Earlier this year, Nvidia took proactive steps to avoid another bubble by halving the hash rate, or mining efficiency, for Ethereum (CRYPTO:ETH) in its new RTX gaming GPUs. It also announced it would launch dedicated CMP (cryptocurrency mining processor) products for miners.

Unfortunately, miners quickly circumvented Nvidia's anti-mining measures, hoarded the chips again, and subsequently dumped them amid China's cryptocurrency crackdown and an upcoming tweak to Ethereum -- which will make it impossible for traditional GPUs to mine the cryptocurrency for a profit. These events could all cause familiar headaches for Nvidia again later this year.

4. The rumors about Intel and GlobalFoundries

Nvidia's stock recently dipped after The Wall Street Journal claimed Intel (NASDAQ:INTC) was interested in buying Advanced Micro Devices's former foundry partner, GlobalFoundries, for $30 billion. Intel already plans to double down on its first-party foundries to catch up to TSMC and Samsung, so buying GlobalFoundries could complement those plans.

That expansion could also support the production of Intel's new line of discrete GPUs, which launched in late 2020. These GPUs haven't gained any significant market share against Nvidia and AMD yet, but they might eventually gain a foothold with aggressive pricing and bundling strategies.

But that's all speculation for now, and Intel still faces a long uphill battle in the gaming GPU market -- so the sell-off was merely a knee-jerk reaction to some market noise.

Lastly, Nvidia's scheduled 4-for-1 stock split on July 20 has attracted attention from investors who previously thought its shares looked too expensive. But stock splits don't actually change a stock's real valuation, which is traditionally gauged by its price-to-earnings or price-to-sales ratios since investors still own the same percentage of the company. So if you think Nvidia is too expensive at 40 times forward earnings, then a stock split shouldn't change your mind.

In theory, splitting Nvidia's stock could attract some smaller retail investors who don't want to pay $700 for a single share. But most trading platforms, including Robinhood, already offer free fractional trades -- so investors shouldn't expect Nvidia's stock split to attract a stampede of bulls.

Out of these five points, investors should pay more attention to the Arm deal, the ongoing chip shortage, and the potential crypto bubble instead of Intel's foundry plans or the 4-for-1 stock split. The first three points could impact Nvidia's growth, while the last two points are mainly market noise.