Wall Street continued to move higher on Wednesday, making up ground from a big drop on Monday. Market participants have been willing to put their concerns on the back burner as they wait to see what companies have to say about their prospects for the second half of 2021. As of 10:15 a.m. EDT today, the Dow Jones Industrial Average (DJINDICES:^DJI) was up 260 points to 34,722. The S&P 500 (SNPINDEX:^GSPC) had gained 26 points to 4,349, and the Nasdaq Composite (NASDAQINDEX:^IXIC) was higher by 52 points to 14,551.

A couple of high-profile Dow Jones stocks posted favorable earnings on Wednesday morning that sent their shares higher. Below, we'll look at what Verizon Communications (NYSE:VZ) and Coca-Cola (NYSE:KO) had to say about their latest results and what they see coming down the road as the economy improves.

Shares of Verizon were up almost 1% following upbeat second-quarter results. The wireless telecom giant reported considerable gains as well as progress in the transition among customers to 5G coverage.

Total revenue rose almost 11% from year-ago levels, helping to produce a 23% rise in net income. Adjusted earnings of $1.37 per share exceeded what most investors had expected to see.

Encouragingly, Verizon said that it added 197,000 net retail postpaid phone subscribers on the consumer side of the business. That drove 5G phone adoption to almost 20% of its wireless customers, an important milestone as it reaps the rewards of its heavy investment into network upgrades.

Verizon boosted its guidance for earnings and wireless revenue growth. That shows continued confidence in the recovery, and investors like that almost as much as they like Verizon's 4.5% dividend yield. 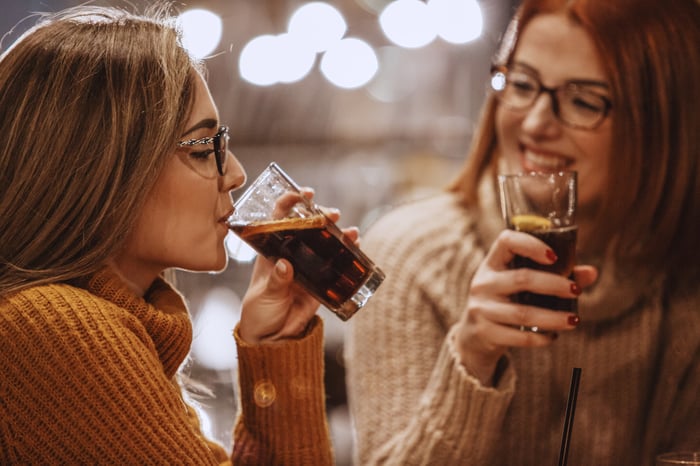 Elsewhere, Coca-Cola shares were up more than 1%. The beverage giant had encouraging things to say about its performance in the second quarter.

The numbers for Coca-Cola reflected the reopening of the global economy over the past year. Global unit case volume jumped 18% year over year, sending net revenue soaring by 42% from last year's figures. Adjusted earnings of $0.68 per share were up an astounding 61% compared to the second quarter of 2020.

Just about everything went right for the company. Concentrate sales were up 26%, and it reaped another 11% from pricing power and a more favorable sales mix. Operating margin jumped nearly 2 percentage points, and Coca-Cola not only gained market share compared to last year's numbers but also rests comfortably ahead of where it was two years ago before the pandemic began.

The company sees an even better future. It plans ongoing innovation with its high-value brands, including the controversial "new and improved" Coca-Cola Zero Sugar recipe. It's also continuing to develop its digital ecosystem and promote sustainability, two trends that should help it continue to grow.

Looking ahead, the company now expects organic revenue growth to come in between 12% and 14%, with adjusted earnings rising 13% to 15% from 2020 levels. For investors who've been thirsty for a rebound, the news from the beverage giant was quite refreshing, and shareholders are quite pleased to see the stock rising to all-time highs on the news.