Shares of Canadian cannabis producer Hexo (NASDAQ:HEXO) have seen some pretty wild trading action in the past year. Over the past 12 months, the stock is up about 51% -- but is down 57% from its February high. On May 28, Hexo announced that it would merge with private cannabis producer Redecan, also based in Canada. This would result in reclaiming the top spot in the recreational cannabis market in that country, with a 17% market share. For perspective, the Tilray-Aphria combination comes a close second with a 15.5% market share.

The acquisition will cost Hexo about 925 million Canadian dollars in cash and stock. Despite its prospects, the market was clearly disappointed with the deal -- the stock is down significantly since the plan was announced. But in the wake of those declines, is this a good time to open a stake in Hexo? 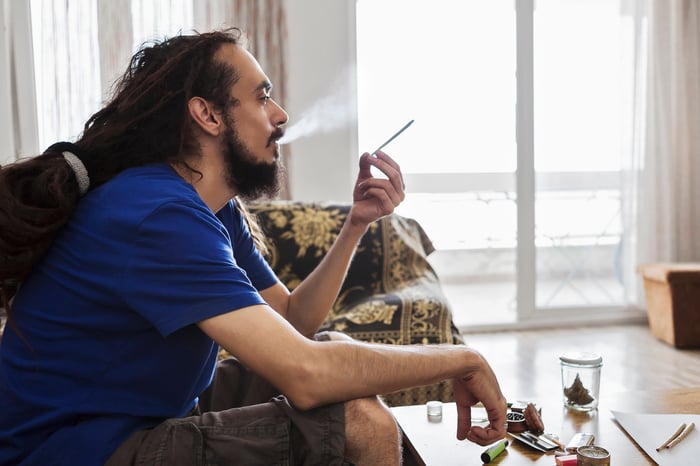 How is Hexo doing?

For the company's fiscal 2021 third quarter, which ended April 30, net revenue was essentially flat year over year at CA$22.7 million. Its growth weakened abruptly after management failed to predict a changing market dynamic. While Hexo is known for its high-THC marijuana strains which consumers love, the company cultivated new strains whose quality (and resulting yield) was subpar versus the output from tests in a greenhouse lab. However, CEO Sebastien St. Louis anticipates that this will be a one-time issue.

Aside from that blunder, Hexo shrunk its operating loss to CA$16.1 million from CA$25.6 million in the same period last year. Its beverage revenue also grew by 616% year over year to CA$3.3 million. Hexo continued to maintain the largest market share in Québec, Canada's second-most populous province, and held the largest share of the cannabis beverage market in the country at 46%.

Redecan also has Hexo's back. That company just finished tallying its fiscal 2020 and fiscal Q1 2021 financial results this month. In the latter period, revenue grew by 146% year over year to CA$24.7 million. Meanwhile, the company banked in CA$6.9 million in earnings, which was more than half of what it generated for all of last year. Before the merger, Redecan was the third-largest cannabis producer in the country and ranked No.1 in terms of consumer loyalty.

What is the outlook?

The issue for this stock is that most investors aren't excited about Hexo's prospects in Canada. Furthermore, its international sales are negligible. It only recently purchased a beverage production facility in Colorado, where it plans to make CBD-infused drinks. However, the company cannot export any of its popular high-THC cannabis to its neighbor since all marijuana is still illegal at the federal level in the U.S.

Its recent acquisition spree has also put the company CA$539 million in debt -- a figure that is several times its expected annual revenue. Between that debt burden and its profitability issues, Hexo will really need to deliver beyond expectations to stay afloat.

Yet I think the company has a good chance of doing that. Keep in mind, most of Canada was under lockdown last year to curb the spread of the coronavirus, which disrupted supply chains. That, of course, is no longer the case due to the widespread availability of vaccines in that country.

Overall, Hexo is a big fish in a big ocean. And, given its strong brand quality, the popularity of its beverages, and consumers' loyalty to Redecan's brands, it can thrive just fine by dominating the Canadian cannabis market. I expect the company to return to growth by its fiscal Q4 2021 or fiscal Q1 2022. Currently, though, Hexo stock is pretty undervalued at just 5.5 times trailing 12-month revenue. It's therefore a top contrarian marijuana stock to buy now.

Is It Too Late to Buy Hexo Stock? @themotleyfool #stocks $HEXO $TLRY Next Article
Current