The roller-coaster-like trajectory that has been Co-Diagnostics' (NASDAQ:CODX) stock price climbed another hill on Thursday. The healthcare-testing specialist's shares closed over 21% higher on the day, due largely to news of a fresh patent awarded to the company.

Co-Diagnostics announced that its CoPrimer diagnostics platform, which underpins testing products -- like its popular-for-obvious-reasons Logix Smart for COVID-19 -- has been granted a patent in South Korea. This bolsters the intellectual-property protection of CoPrimer, which received a U.S. patent in 2018. 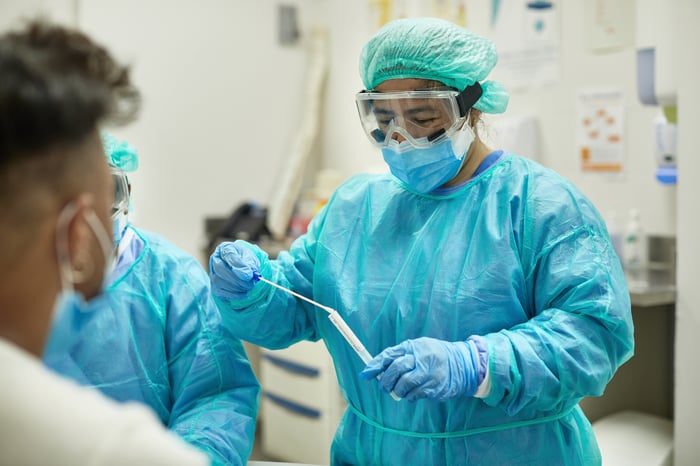 "We believe that this patent granted by South Korea provides additional validation of the uniqueness and versatility of the CoPrimer platform," the company quoted CEO Dwight Egan as saying.

He added that the overwhelming majority of the diagnostics products the healthcare company has sold have been to repeat customers. Now it has a safe and clear path for adding South Korean clients to that list.

Co-Diagnostics is headquartered in the U.S., and its sales have shifted there. In its most recently reported quarter, 62% of revenue was derived from within our borders, with the remainder consisting of markets abroad. That was essentially a flip from the year-ago quarter, in which 60% of revenue comprised international sales.

South Korea alone is unlikely to reverse the ratio in favor of foreign sales again. Nevertheless, it's a relatively affluent market for the company.

The patent news is unambiguously good for Co-Diagnostics. That, plus the dramatic rise in both coronavirus cases and fatalities throughout the globe, should continue to support and at least sustain the sales of the company's most important product.