Courtney Carlsen
(tmfcourtcarlsen)
Author Bio
Courtney is a Certified Public Accountant based in Florida. Courtney covers anything financial, including insurance, banks, REITS, and fintechs. In his free time he enjoys golfing, working out, and reading.

Morgan Stanley (NYSE:MS) posted another strong quarterly report last week, with stellar growth in both revenue (8%) and net income (10%). The second quarter was the first in which E*Trade and Eaton Vance were both on its books for the entirety of the period, and both are making contributions. And lower trading revenues for the firm were more than balanced out by stronger wealth and investment management activity.

Morgan Stanley has been a stellar value stock for months now, and it continues to perform. Here are three key takeaways for investors from the Q2 report.

1. Fixed-income trading was down, but M&A activity was up

Institutional securities revenue dropped by 13.5% year over year to $7 billion in the second quarter. This decline was largely driven by a reduction in fixed-income trading revenue, which was $1.7 billion in the quarter -- down from $3 billion in the same quarter last year. Fixed-income trading was impacted by lower bid-offer spreads, lower volatility, and tighter credit spreads. These spreads are related to the bid-ask spread, or the difference between the highest price a buyer will pay and the lowest price a seller will take. In times of market volatility, the bid-ask spread can widen, which benefits firms like Morgan Stanley that process these trades and profit from the difference between the two. 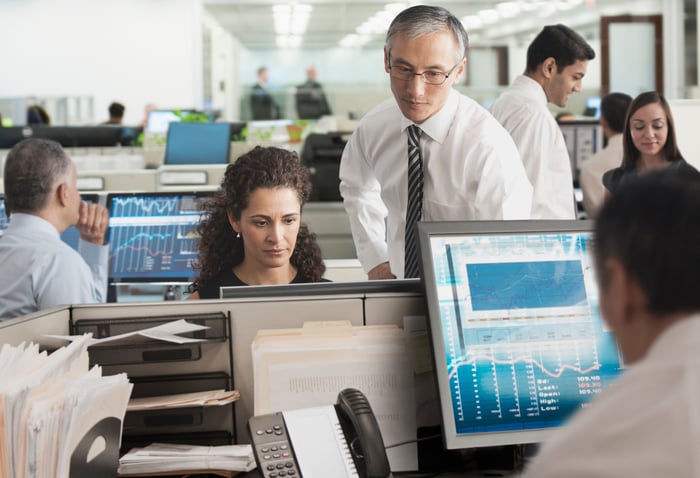 However, Morgan Stanley's equity and investment banking revenue streams were resilient. Investment banking revenue increased by 16%, while equity revenue increased by 8% thanks to rising underwriting activity and strong client activity in Asia. Advisory revenue was $664 million, an increase of nearly 44%, as mergers and acquisition activity remained high, with industry volumes reaching record levels.

2. The integrations of E*Trade and Eaton Vance continue to give earnings a boost

Morgan Stanley saw strong inflows across its wealth and investment management segments, adding $250 billion in net new assets in the quarter. Strong asset growth came as the company continued to integrate its recent major acquisitions, E*Trade and Eaton Vance. The second quarter is the first full quarter that includes its Eaton Vance acquisition, while E*Trade has been included in its last three quarters.

The firm's wealth management segment revenue increased 30% from last year. This segment was boosted by its E*Trade acquisition, which helped enhance its year-over-year comparisons. The investment management segment's revenue rose by 92% to $1.7 billion, and assets under management in the segment grew to $1.5 trillion, up from $665 billion last year thanks to the Eaton Vance acquisition.

This diversification of income streams helps reduce earnings volatility for the firm, and is one reason why it was able to post one of its best quarters on record despite a drop in trading revenue. Gorman says that this is key to the firm's long-term growth goals of earnings stability and resiliency in different economic cycles.

3. It's reinvesting in its business and doubling its dividends

In the second quarter, the company's return on average tangible common equity -- a key metric for profitability -- was a solid 19%, and for the first six months of the year, it was 20%  -- topping its longer-term goal of 17%.

Thanks to strong profitability and growth, Morgan Stanley has built up excess capital that it will put to work improving its businesses, and will also return more money to shareholders. In the second quarter, it bought back $2.9 billion in stock under a $12 billion repurchase authorization that runs through June 30, 2022. Not only that, but it doubled its dividend payout to $0.70 per share.

The company's integration of its acquisitions gave it impressive year-over-year growth while making it more resilient in all kinds of markets. It continues to be a great value stock, trading at a P/E ratio under 13, while its closest competitor, Charles Schwab, trades at a multiple of 29. Finally, the dividend boost gives it a yield of 2.9% at recent prices. Morgan Stanley is firing on all cylinders, and the diversification of its business makes it both a great value stock and a dividend stock that you can buy and hold for the long haul.