Walt Disney (NYSE:DIS) has made an art out of turning big theatrical releases into theme park rides and attractions. The tables are starting to turn. Disney+ introduced a new series this week -- Behind the Attraction -- with every episode looking at the origin of popular theme park attractions.

The stakes will be raised even higher when Jungle Cruise hits theaters next week. The film, starring Dwayne Johnson and Emily Blunt, is named and themed loosely for the classic pun-laden Disneyland boat ride. 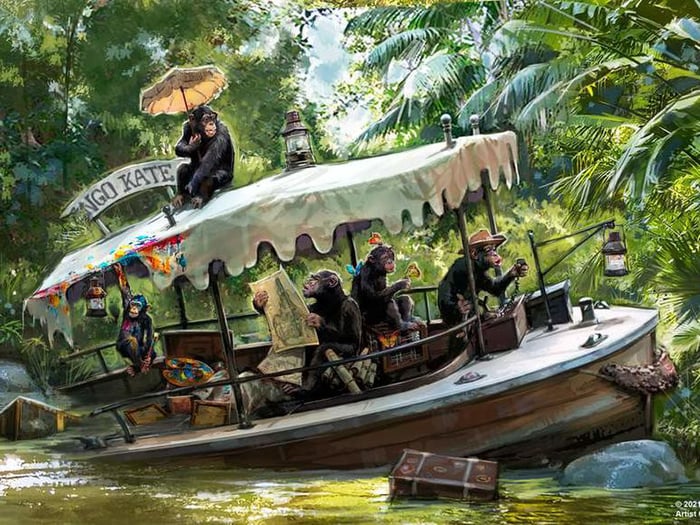 This isn't the first time Disney has leaned on an iconic in-park experience as a content creator. The Pirates of the Caribbean swashbuckler-heavy boat ride has spawned the most successful theatrical franchise based on a theme park attraction, but Disney hasn't shied away from putting out films titled Country Bear Jamboree, Haunted Mansion, Mission to Mars, and Tower of Terror.

Some of those flicks aren't particularly watchable, but the synergy is fairly obvious if things click. A blockbuster at the multiplex will draw visitors to Disneyland or Disney World, and the media giant won't have to invest in building a new ride to cash in on a hot movie.

Next week's Jungle Cruise will be somewhat different. Disney has been investing in updating the attraction on both coasts. It's not necessarily the new film's arrival inspiring the tweaks. We're not getting audio-animatronics of Blunt and The Rock added to the watery attraction. The original Jungle Cruise ride had some elements that don't jibe with the woke new normal, joining Pirates of the Caribbean and eventually Splash Mountain as classic rides that are going for a more socially-aware makeover.

Disney's ecosystem is difficult to top. It operates the world's most-visited theme parks. In 2019 it put out the country's six highest-grossing films. Its media empire is helmed by ABC, Disney Channel, and ESPN, and they give the House of Mouse a deep reach into homes. It's not just mere luck that the Disney+ streaming service would go on to top 100 million paying subscribers just months into its second year of availability. Put it all together and Disney is built to cash in on any property that spikes in popularity in any of its operating segments.

The easiest connection is when Disney has a hit movie, a pond that is well stocked after making 10-figure acquisitions of Marvel, Pixar, and Lucasfilm. Lucasfilm's Star Wars is the basis of themed lands at Disney's theme parks in Florida and California; it's the series that put Disney+ on the map, and a Star Wars-themed luxury escapism hotel will open next year at Disney World.

The new Behind the Attraction show on Disney+ is smart. It gives the bellwether media stock promotional material that it can push out as content for the fast-growing service. If Jungle Cruise is a hit, it will be even smarter, especially if it's successful enough to warrant sequels that will keep demand humming for the theme park experience as well as incremental merchandising opportunities. Sometimes the best place to mine for content is in your own backyard.