During the heights of the COVID-19 pandemic in the U.S., the American healthcare industry was put to the ultimate test. Hospitals and urgent-care facilities were overloaded, non-COVID patient appointments were canceled or indefinitely postponed, and the need for medical care increased. At the same time, a new strategy was evolving -- shaping the pharmacy of the future.

In July 2020, Walgreens Boots Alliance (NASDAQ:WBA) announced the expansion of a $1 billion investment in VillageMD -- a chain of full-service primary-care clinics -- in its efforts to become the first pharmacy chain to provide full-service primary care at a large scale. 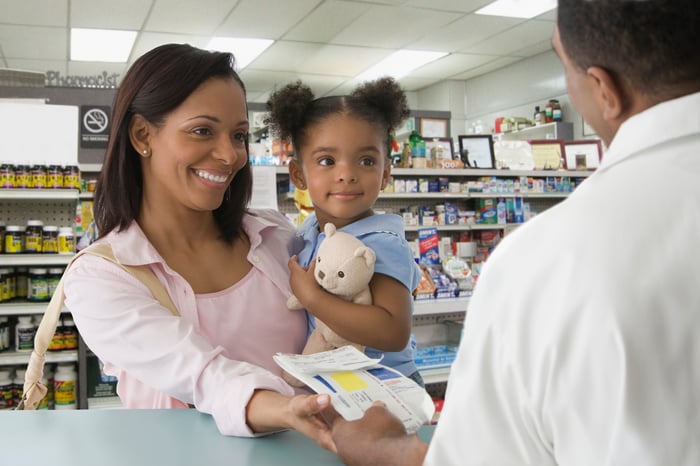 Walgreens' original intention was to bring a one-stop shop for pharmacy products and medical care to customers and patients through the opening of 500 to 700 VillageMD clinics conveniently co-located with Walgreens pharmacies. By January, after a renegotiation of investment terms in order to increase the pace and scale, three-quarters of that initial investment ($750 million) had been completed, and the company was building out 40 of its Village Medical at Walgreens clinics in the states of Arizona, Florida, and Texas.

Not only do these co-located pharmacy clinics offer a convenient one-stop experience, they also focus on areas lacking in current medical care to meet the growing needs of patients. Each pharmacy clinic offers a full slate of medical treatment services and accepts a wide range of healthcare insurance options. With the help of an online platform, patients are able to meet with healthcare specialists either at the clinic or at home, as well as through telehealth providers.

Now Walgreens is continuing its expansion; just last week, it announced 29 more planned co-located pharmacy clinics for completion this year, with the goal of reaching 600 across 30 markets over the next four years. Among its new locations in Texas are El Paso, Austin, and Houston, and across these three cities, the company notes that there are over 825,000 people over the age of 65 who live within five miles of a Village Medical at Walgreens. Although there's no guarantee that the company can pull people away from the medical facilities and doctors they're accustomed to, that kind of planned expansion does offer options for patients, and it provides new revenue paths that should get the attention of potential investors.

In its fiscal 2021 third-quarter results announced on July 1, the company had good news to report. Revenue increased at a rate of 12% year over year to $34 billion. Backed by a decrease of 0.04% in selling, general, and administrative expenses, the company boasted an 83% increase in earnings per share over the prior-year quarter. And year-to-date sales have come in at $98 billion, a 7% uptick.

One thing to keep in mind is that, while the investment is intended to build out 600 Village Medical at Walgreens pharmacy clinics, that goal is years away. To date, only 46 locations have been opened, with an additional 35 slated to open by the end of 2021. With the renegotiated terms to speed up the pace and scale of the buildout, investors have some reason to believe that Walgreens may actually complete the project ahead of schedule. Investors will want to keep an eye out for quarterly earnings calls or any news related to plan revisions.

For the five-year (or more) investor

Walgreens is planning and taking more action to get investors excited as the year goes on. As part of its strategy to expand financial services, the company recently announced that it will launch Walgreens debit and credit cards this fall. It also announced that it will pay out an increased dividend on Sept. 10 (for investors of record as of Aug. 20); the dividend has been increased by 2.1%, to $1.91 annually. This marks an incredible 355 straight quarters (88 years) of dividends, including 46 consecutive years in which the dividend has been raised.

If you're a five-year investor looking for a bargain, you may not have to go much further. Walgreens' stock price currently hovers at about $46 per share, at the mid-level of its 52-week range; shares saw a one-day drop of 7% on July 1, even as the company raised its growth forecast to an expected 10% for the fiscal year, based on a boost from COVID vaccines. The stock price has slid 13% since June 17 to just below the lowest of analysts' price targets, where $55 is the average and $68 is the high.

With its forecast recently raised by 10% and a compelling three- to five-year growth plan, it's not difficult to see shares returning to that $55 average price target sooner rather than later, for a gain of nearly 20%. Figure in a consistently increasing dividend from a Dividend Aristocrat, starting at $1.91 per share, and Walgreens Boots Alliance offers up a strong reason to be your next great buy.