The market hasn't been kind lately to cannabis stocks, with several cannabis ETFs down 14% to 15% over the past six months. MariMed (OTC:MRMD) and Gage Growth (OTC:GAEG.F) are both bucking that trend, however -- these two small-cap stocks have both shown phenomenal growth this year. MariMed is up more than 70% for the year, while Gage is up more than 3% since its debut in April on the Canadian Securities Exchange. Nonetheless, the current situation presents a buying opportunity, as both are more than 24% below their highs for 2021.

MariMed and Gage have forecasted revenue growth this year of at least double what they achieved in 2020, and I'm excited by how far they've come in the past year. 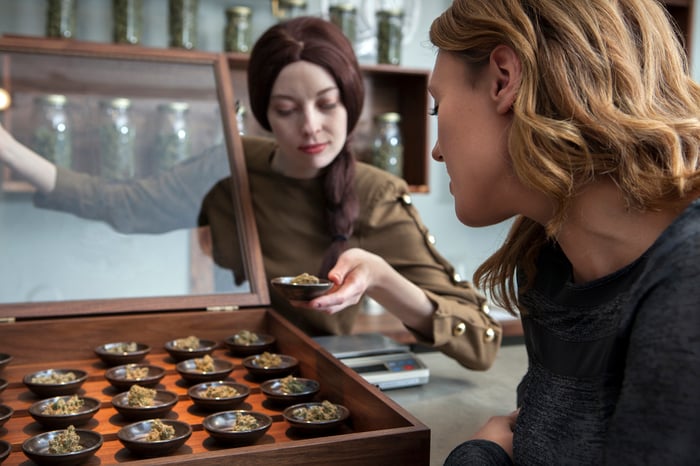 MariMed has found a path to profitability

MariMed is a multistate operator focused on what it sees as five high-growth states: Delaware, Illinois, Maryland, Massachusetts, and Nevada. It has seven dispensaries with three more in development, and licenses for 13 dispensaries in six states.

The company doubled its earnings in 2020 and said it expects to do the same this year.

The key for MariMed is its focus on its brands, led by Betty's Eddies, a vegan line of edible fruit chews that gives the company national sales potential in retail outlets beyond its own. The company isn't trying to be the biggest operator, but it is focusing on growing the right way. In March, MariMed closed a $46 million financing facility with Hadron Healthcare Fund to get rid of all of the former's long-term debt, except for mortgage-backed loans.

Gage Growth has focused on Michigan

Gage Growth set out to focus on one key market, Michigan, but it doesn't plan to stop there. In 2008, Michigan became the 13th state to legalize medical marijuana, and in 2018 the state opened up to adult-use marijuana sales. Gage has three dispensaries in the Great Lakes State, with plans to reach 20 or more by the end of this year.

Michigan is the 10th largest state in population, but its marijuana sales put it at No. 3 in the nation last year, behind only California and Colorado. Gage wants to adapt its formula for success in Michigan to other states through acquisitions. CEO Fabian Monaco said in a recent interview that states that interest the company include Illinois, Massachusetts, Maryland, New Jersey, Ohio, and Pennsylvania; all have market demographics similar to Michigan's, and like Michigan, they all have a large existing base of medical-use marijuana sales.

Both are definitely worth looking into

These both appear to be cannabis stocks with great growth potential, particularly for patient investors. The risk with smaller cannabis companies -- and the flip side of all that growth -- is they tend to fall harder in a bear market than larger companies, so these are for investors who can afford to buy and hold.

My first choice among the two would be MariMed, because it is already turning a profit, saw even more of a percentage increase in revenue this past quarter, and has a little more balance thanks to its presence in several states.

I do think Gage Growth is worth watching, though. While it may not have the balance that MariMed does, it is following a similar playbook to what Trulieve has done in Florida, learning to dominate a state market before branching out. Gage's shares haven't grown as much as MariMed's this year, so that may allow for more upside for investors.