Teladoc Health (NYSE:TDOC) has been an amazing stock for long-term investors. The company was founded in 2002 and went public in 2015. In its S-1, Teladoc billed itself as "the nation's first and largest telehealth platform." Simply put, Teladoc is a website where people can visit with a doctor online. The company's website is a virtual hospital, open 24/7. You can talk with a doctor within minutes. For speedy and convenient healthcare, few businesses offer what Teladoc can. The stock is up over 420% since its IPO.

Are companies still trying to beat Teladoc? Yes they are. Amazon (NASDAQ:AMZN) is one such competitor. The e-commerce and cloud services giant is now entering the healthcare market on the insurance and pharmacy businesses. But perhaps the scariest news for Teladoc investors is that Doximity (NYSE:DOCS) just went public, and the company boasts some numbers that suggest it might be the stronger stock going forward. 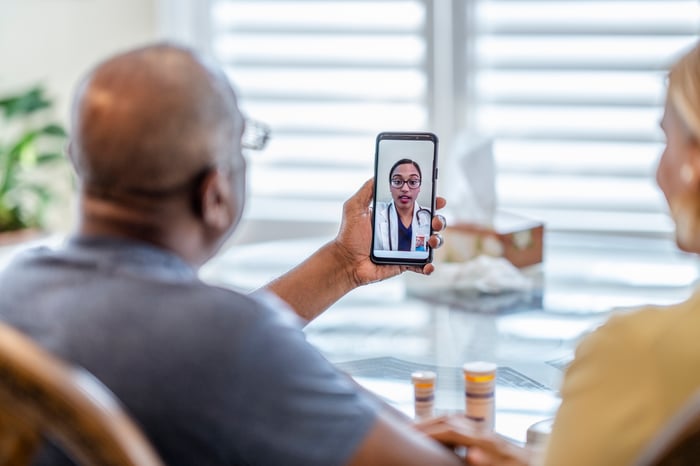 Doximity has a lot of optionality

Like Teladoc, Doximity has a simple business that's easy to explain. It's a digital platform for doctors. The website is designed to help doctors network and communicate with each other. It's the Facebook of healthcare. Eighty percent of American doctors are already on Doximity, and 90% of graduating medical students are on the site.

When COVID-19 hit last year and virtual healthcare took off, Doximity decided it would be a good idea to help all the doctors on its platform make virtual visits with their patients. So Doximity rolled it out. And the doctors on its platform used it for 63 million virtual visits with patients over the last 12 months. That's a shocking number, because it's almost six times higher than what Teladoc did in 2020.

Those are some interesting comps, right? Teladoc brings in six times more in revenue than Doximity, and is growing almost twice as fast. Yet Doximity had way more virtual visits than Teladoc. And the other shocking stat is that Doximity, despite its rapid revenue growth, is already highly profitable. Use the black ink to write out 24%, and use the red to mark Teladoc's 48% loss.

Of course, Teladoc has many direct competitors, companies like the horribly named American Well (Amwell) (NYSE:AMWL). (How's your stock doing? I fell down an American Well.) In tech stocks and internet companies, it's often wise to avoid the No. 2, the No. 3, or the No. 4. Those stocks tend to get obliterated as the top dog continues to dominate and seize market share. 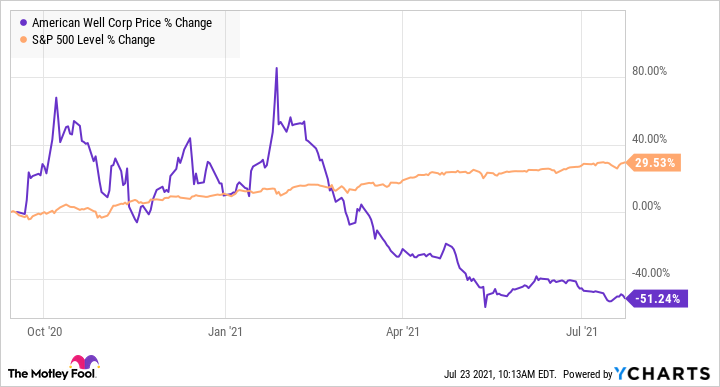 While Teladoc investors have little to fear from all the copycats trying to compete directly with the company, it's possible that the whole business model will be blown up by Doximity's virtual website. It's the problem with indirect competition -- you often don't see the challenge until it's too late.

Doximity is free (at first)

Doximity is a free website -- that's how it's gotten so many doctors into its network. Teladoc is trying to build out a network of physicians that it can market to health insurers and other healthcare payers. Doximity already has that network in place.

Of course, these networks are quite different. Doximity's (much larger) network is made up of physicians and other healthcare providers. Doximity pays doctors nothing to join its network -- it just gives doctors free tools to use, including the capacity for virtual visits with patients.

Teladoc is trying to become an employer of doctors, a virtual hospital. It cuts checks to all the doctors in its network. Doximity is the opposite of that. It doesn't pay doctors anything. Indeed, for some of Doximity's advanced tools, it actually charges doctors a fee.

So it's obvious which company has a stronger value proposition for doctors. Just follow the money. Teladoc has to pay money to doctors to get them to join the network. But Doximity is so high up on the value chain, doctors happily pay it money.

What about patients? Again, Doximity is the stronger value. Both companies offer virtual healthcare. But Doximity offers virtual visits with your primary care physician. Teladoc can't do that. So for people who want a relationship with their doctor, who want to "keep their doctor," Doximity is a no-brainer.