Biogen's (NASDAQ:BIIB) earnings report last week offered us a clear picture of why the biotech company is in need of a change. Its main multiple sclerosis (MS) business is on the decline as blockbuster Tecfidera loses ground to generic competition -- and newer MS drug Vumerity is taking a while to generate significant revenue. Sales of other big drugs also are on the decline.

But there may be brighter days ahead for Biogen. CEO Michel Vounatsos says the company is in the process of becoming not just an MS company -- but a full neuroscience company. Let's take a look at three drugs with blockbuster potential and see if they can indeed transform this biotech giant. 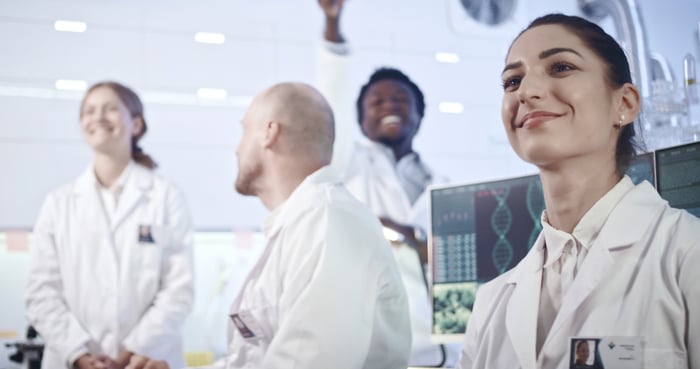 Biogen recently reported positive data from a pivotal phase 3 trial investigating zuranolone for major depressive disorder (also known as clinical depression). The drug candidate showed statistically significant improvement in symptoms according to a commonly used rating scale. And patients who improved by Day 15 of treatment maintained 86% of that progress four weeks after the end of treatment.

Here's where Biogen's investigational drug stands out from current products: Today's depression drugs generally require daily long-term use. But zuranolone is given daily for two weeks with the goal of producing rapid and sustained results. In another phase 3 study by partner Sage Therapeutics, 70% of trial participants who responded to initial treatment needed a maximum of one additional treatment in a 12-month period.

The U.S. Food and Drug Administration has given zuranolone Breakthrough Therapy Designation. This is meant to speed up the process for potentially game-changing products. Biogen and Sage are talking with the FDA about what comes next.

Depression will be the leading cause of disease burden by 2030, according to the World Health Organization. More than 264 million people worldwide suffer from the disorder. During last week's earnings call, Vounatsos predicted zuranolone will be a multi-billion-dollar product.

Biogen recently acquired TMS-007, an investigational treatment for acute ischemic stroke, from Japan's TMS Co. The investigational drug is a thrombolytic agent -- meaning it breaks up blood clots. But it has a clear advantage over today's approved thrombolytic treatments. It's demonstrated it can be used during a wider timeframe -- without a high risk of symptomatic intracranial hemorrhage.

Patients in a phase 2a trial were dosed up to 12 hours after stroke. And none of them experienced intracranial hemorrhage. Rates of hemorrhage have been as high as 6% in studies of today's thrombolytic therapies given in a nine-hour timeframe. If Biogen's TMS-007 studies continue to go well, the company may have yet another game-changing product on the way.

And like zuranolone, this potential product addresses a vast market. The acute ischemic stroke market, at a compound annual growth rate of more than 4%, is expected to reach $11 billion by 2027, according to Verified Market Research.

Aduhelm may be one the most talked about new drugs right now. The FDA granted it accelerated approval last month. Some eagerly welcomed the treatment -- the first to address the underlying cause of disease rather than just the symptoms. But Aduhelm has its share of dissenters. And many of them are doctors who aren't ready to prescribe it for their patients.

The company also faces criticism over the treatment's $56,000 annual price tag and an investigation into the regulatory approval process. Why all the problems? Biogen initially discontinued studies of the potential drug on evidence that it wouldn't work. Then Biogen surprised investors when it reinstated the program. Many experts didn't like that regulatory approval was based on a post-study analysis.

Biogen surely will face challenges with Aduhelm. But if it's able to ease the minds of doctors and investors regarding the drug's efficacy, the future could be bright. Some analyst predictions forecast peak sales as high as $15 billion -- and that's just in the U.S.

So, what are the chances of a Biogen transformation?

If Biogen is able to build neuroscience strengths with these three potential blockbusters, we may see a transformation. As sales of its main MS business decline, it's clear the company must reach out into other areas.

We should keep our eyes on the Aduhelm story over the coming year. Biogen has said it doesn't expect a huge contribution from the drug to earnings this year. But rollout and potential acceptance of the drug by doctors and health plans will offer us clues about its future. An update on zuranolone's regulatory path and more data on TMS-007 will offer us clues too.

Biogen has climbed 34% year to date. And it's trading about $100 lower than its record high of $440 back in 2015. At the same time, annual revenue and profit have started to decline. 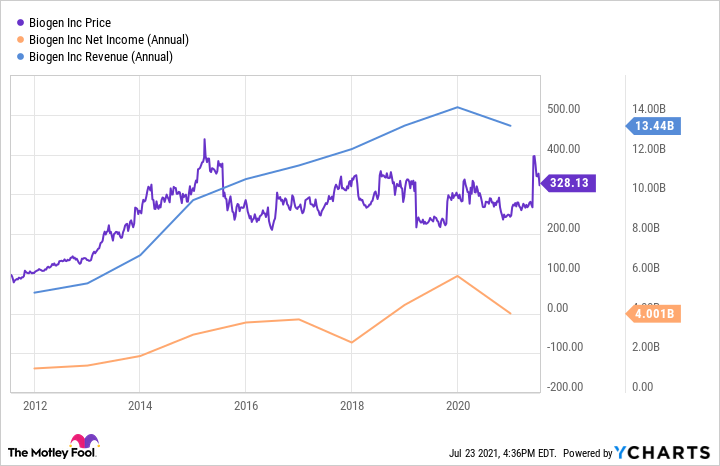 It will take some time to reverse that trend and get possibly these and other new products on the market to compensate for declines in older drugs. I think Biogen will transform. But the process may take quite a while. So, at current levels, I'm not in a rush to buy shares of this biotech giant.