A future market crash is no reason to hold off on buying these great companies today.

The past 16 months has been incredible for stock market investors. Since bottoming out on March 23, 2020, the S&P 500 Index, a great proxy for the U.S. stock market, has gained over 101% in total returns, more than doubling in value over that period.

Let me put it another way to stress how wonderful this period has been: Based on the stock market's usual average rate of return, it usually takes eight years to earn that kind of return. It's been a very good year and a half for investors.

But there's reason many investors are worried about another crash. Most stock market indexes closed at or near record levels on Friday July 23, and an overvalued stock market, rising inflation, and rising cases of coronavirus that could upend the economic recovery, portend a stock market sell-off, potentially sooner rather than later. 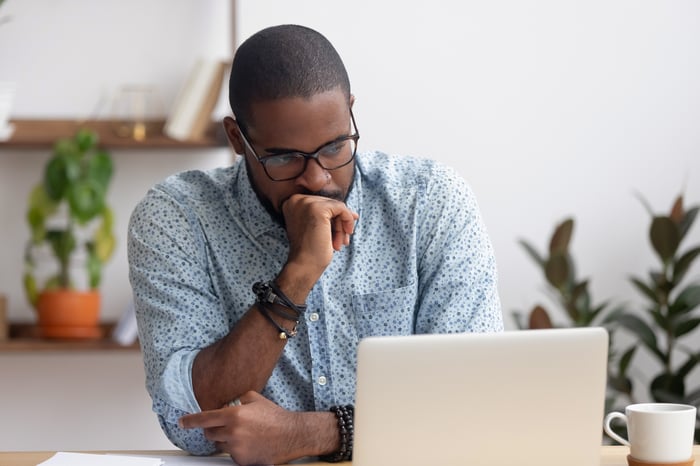 But that doesn't mean it's a smart move to sit on the sidelines, waiting for the next market crash before you buy. That's especially true with top dividend stocks, including Visa (V -0.61%), Brookfield Infrastructure (BIP -0.33%) (BIPC 0.19%), and Verizon Communications (VZ 0.76%). Not only should these stocks prove less volatile than many others, they're solidly profitable companies, paying dividends that you can count on, making it much easier to hold through the market's ups and downs.

A key cog in the global growth of electronic payments

It may be easy to assume that there's just not much room for electronic payments to grow, particularly if you live in the U.S. or Europe. But the global reality is most transactions are still done in cash. But a fast-growing global middle class, much of which is entering the middle class with a smartphone in hand, is quickly shifting away from cash and adopting cashless technology.

For Visa, this is a wonderful thing, and should pay off immensely for years to come. The global middle class is on track to add about 1 billion new members over the next decade, a number that's roughly equivalent to projected global population growth over the same period. And as one of the largest electronic payment processors on earth already, Visa has some very powerful structural advantages that should lead to continued growth from here. To start, you have its immense network effect, where banks, merchants, and consumers all want a Visa relationship, since it means more access to more of the other stakeholders.

Already one of the 10 largest U.S. stocks, with a market cap of more than $500 billion, I agree with my colleague Sean Williams that Visa should remain one of the biggest companies in America for many years to come. There's no need to wait for the next market crash to buy shares of this best-of-breed businesses. And while it's 0.5% dividend yield may be modest, its record of dividend growth is incredible. 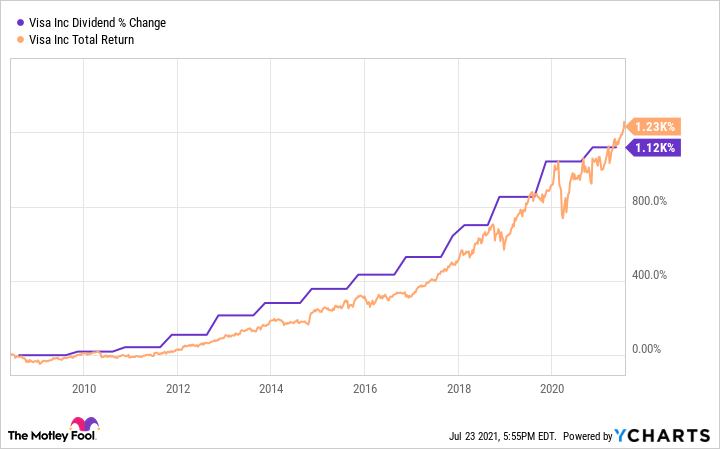 Own the infrastructure the modern world depends on

Like Visa, Brookfield Infrastructure's prospects are largely tied to the growth of the global middle class. Unlike Visa, it's not a household name, but there's a case that its business is even more important. Large swathes of the world don't have access to energy, transportation, water, and telecommunications infrastructure to meet the needs of a growing population, and Brookfield Infrastructure's business is to develop, acquire, improve, and operate these sorts of assets.

And it's been a wonderful business. Since going public in 2008, it has simply crushed the market as an investment, a product of both growing the business larger and more valuable, but also massive growth of its sizable dividend: 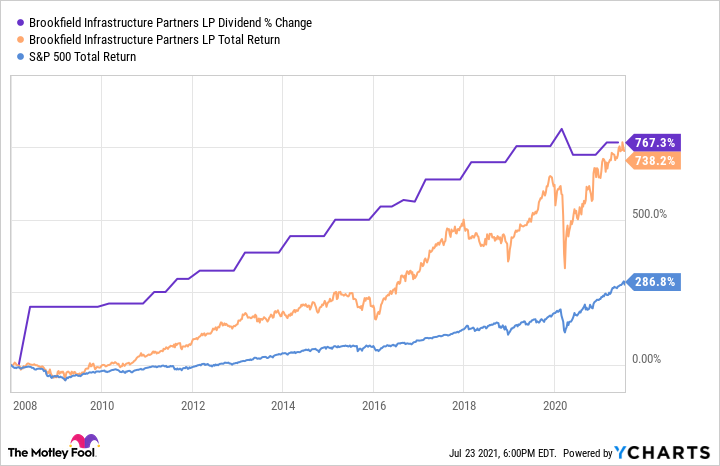 At recent prices, the dividend yield of 3.6% is generous in this low-rate environment, making it very attractive for income-seekers.

One of the best aspects of Brookfield Infrastructure is the nature of its cash flows. Infrastructure assets are generally very recession resistant, while many of its contracts also have escalators to adjust for both rising inflation, and foreign currency exchange fluctuations. As a result, this is exactly the kind of business investors should want to own during a market crash. Its stock price might take a temporary hit, but its business results should prove rock-steady as they have over the past two market crashes and recessions.

A telecom giant to help play defense and earn income

Few things have become more a part of modern life than the smartphone, and the advent of 5G is unlocking even more of the power of mobile computing. With one of the largest cell networks in North America, and a growing network of 5G connections, Verizon is the kind of business that might be perfect for your portfolio.

That's especially true if you're looking for some more "defensive" holdings, that is, stocks that might not be market-beaters when stocks are running with the bulls, but are less likely to collapse during a market crash. For example, here's how Verizon shares -- in total returns, including the dividends it paid during the period -- held up from the 2020 pre-crash peak in February, through last May: 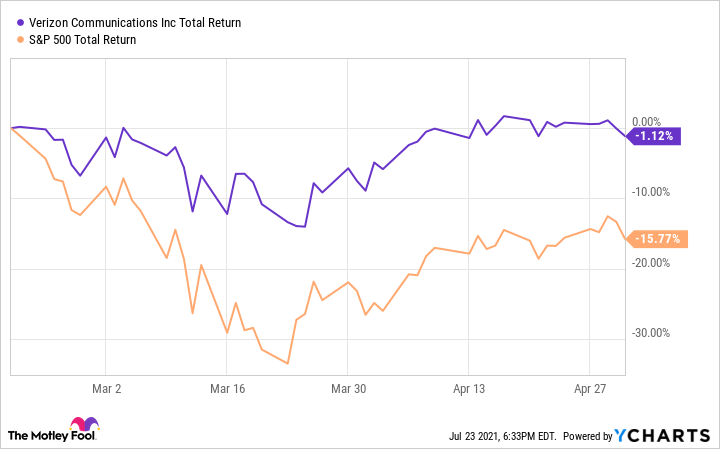 And I think it could start to deliver even better business results in the future, as management works to simplify the operating business and focus on its core telecom unit, which added 528,000 net new postpaid customers last quarter.

With a dividend yield of almost 4.5% at recent prices, and growing net income that should afford future dividend increases, there's plenty of reason why you might want to join Warren Buffett and buy Verizon before we see the next stock market crash.