The answer is in the first two letters of the vaccine maker's name.

The correct answer to the question is Novavax (NVAX -1.80%). And it's not even a close contest. Novavax is by far the best-performing vaccine stock with a gain of more than 4,900% since the beginning of last year.

Few stocks achieve that kind of gain in such a short period of time. Of those that do, many of them quickly run out of steam. The risk could be even greater for shares of a company that hasn't even launched a product yet while rivals already dominate the market. Is it too late to buy Novavax stock? 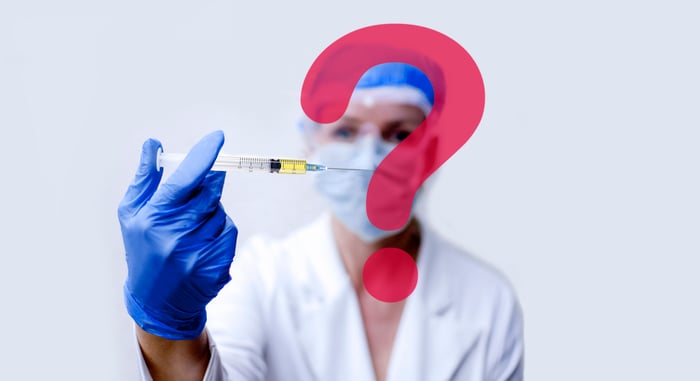 Let's first address the issue of whether or not Novavax stock has little room to run after racking up a huge return over the last 19 months. The argument that the stock won't be able to go up much more is based on the assumption that most of Novavax's sales prospects are already baked into its share price. But is that assumption valid?

The consensus analysts' 2022 revenue estimate for Novavax is a little over $5.2 billion. Novavax's market cap currently stands at close to $14.8 billion. Using these two figures pegs the company's forward price-to-sales (P/S) ratio at 2.84.

As you might expect, that's a really low forward P/S multiple for Novavax's industry. Biotech stocks, on average, traded at around eight times expected sales earlier this year, based on data compiled by NYU's Stern School of Business.

The bottom line is that Novavax stock should have plenty of room to run based on its valuation. Of course, this involves another key assumption that analysts' revenue targets aren't way off.

If Novavax doesn't win emergency use authorization (EUA) for its COVID-19 vaccine NVX-CoV2373, it definitely won't hit analysts' revenue estimates. However, the company's chances of securing EUA for the vaccine appear to be pretty good based on its late-stage study results.

But what about the concern that Novavax might be too late to the party in the COVID-19 vaccine market? After all, the U.S., European Union, and other major countries have already inked huge supply deals with Pfizer (along with BioNTech) and Moderna.

However, it's important to remember that Novavax has supply agreements in hand as well. These include supplying 1.1 billion doses to the COVAX Facility for use in developing countries. Novavax could have more supply deals soon. As a case in point, its partner Takeda is in discussions with the Japanese government about an order for 150 million doses.

The reality is that the consensus 2022 revenue target of $5.2 billion isn't overly aggressive. Sure, the Pfizer-BioNTech and Moderna vaccines will probably continue to dominate the market. That doesn't mean that Novavax won't be able to sell a lot of doses of its vaccine, though.

In my view, it's absolutely not too late to buy Novavax stock. No, I don't think the future gains will be nearly at the level of the stock's performance since early last year. However, there should easily be significant upside potential for Novavax after it presumably wins EUA for NVX-CoV2373 in the U.S. and other countries.

I also anticipate that Novavax could be a contender in the COVID-19 vaccine market over the longer term after the pandemic ends. The company is arguably the leader right now in developing a combo COVID/flu vaccine. None of its rivals already have promising late-stage candidate vaccines for both COVID-19 and influenza, but Novavax does. Don't think for a second that Novavax's winning ways can't continue.