Has your experience with the stock market not been as rewarding as you had hoped? Maybe you were blindsided by a soured trade that so many others were sure would pay off. Investing isn't nearly as easy as it seems to be from the outside looking in.

If you're ready to throw in the towel, don't! There's good money to be made in the market. You may simply need to adjust your approach and work with instruments that may be a little less sexy but are a lot more reliably productive. Here's a rundown of three exchange-traded funds that just might fit the bill.

OK, it's almost cheating to step into a fund built from the ground up to not do the very thing that drives investors crazy. Nevertheless, the iShares Edge MSCI Minimum Volatility Factor ETF (NYSEMKT:USMV) eases a lot of this game's inherent headaches.

Just as the name suggests, the iShares Edge MSCI Minimum Volatility fund seeks to own stocks that demonstrate less volatility than the overall U.S. market. Its primary approach to picking such stocks is limiting its holdings to lower-beta names. 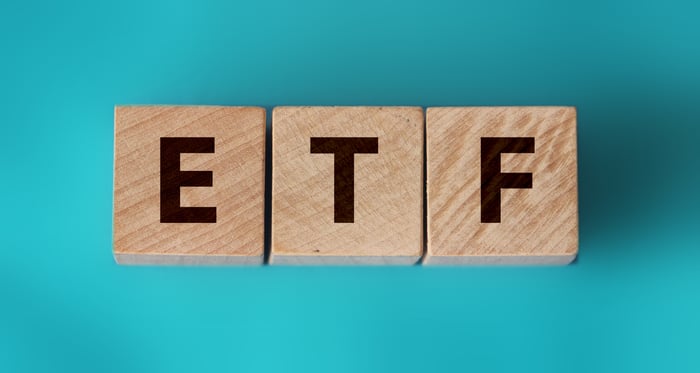 Beta is simply a mathematical concept that compares a stock's level of erraticness to a benchmark like the S&P 500 index (SNPINDEX:^GSPC). For example, the semiconductor stock Advanced Micro Devices sports a beta score of 2.0, meaning it's twice as volatile as the S&P 500... whether you're talking about bullish volatility or bearish volatility. At the other end of the spectrum, a predictable, tame ticker like utility stock Duke Energy boasts a beta of only 0.26, as it doesn't move much on any given day even if the market is rockin'. The S&P 500's beta is 1.0, as it's obviously no more or no less volatile than itself.

With that as the backdrop, the average beta for the stocks that make up the iShares Edge MSCI Minimum Volatility Factor ETF's holdings is a fairly low 0.76. That low-volatility tone is set by some of the fund's biggest holdings, like Ely Lilly and trash-collection outfit Waste Management. The price of the iShares MSCI Minimum Volatility Factor ETF can go down, to be clear. It just tends to lose ground less dramatically, meaning you don't suffer from the sheer shell shock of unexpected losses.

In a similar vein, the ProShares S&P 500 Dividend Aristocrats ETF (NYSEMKT:NOBL) is another means of avoiding being burned by the market by limiting your holdings to a certain caliber of equity. The fund's core stock-selection approach isn't necessarily limiting a search to low-beta names, but rather it focuses on the market's most proven dividend payers. As it turns out, though, the market's most reliable dividend-paying stocks tend to be less volatile names.

If you're not familiar, a Dividend Aristocrat is a company's that's not only paid a dividend for at least 25 consecutive years, but has raised its payout in every one of those years. As of the end of last month there were only 65 such stocks, and most of them have increased their yearly dividends for at least straight years.

The benefit to owning such names is somewhat obvious: By paying a dividend, investors collect some of their return right now rather than waiting (and hoping) that a stock's price alone is higher upon an exit than it is at the entry. And, with a current dividend yield of 2.4%, holders are doing pretty well in this regard.

The ProShares Dividend Aristocrat ETF brings a much more important attribute to the table for war-weary investors, though. That is, while it may only match 91% of the broad market's bullishness, the fund only falls 79% as far as the market does when it's in sell-off mode. It's a testament to the quality of the ETF's constituents.

Finally, add the iShares Core S&P Mid-Cap ETF (NYSEMKT:IJH) to your list of exchange-traded funds that are more comfortable to own than individual stocks.

The mid-cap ETF is fully capable of taking a tumble, for the record. In fact, it's typically more volatile than the S&P 500 large-cap index, on the way up as well as on the way down. If big pullbacks aren't your thing, this one could still be tough to own. There's a two-faceted (and related) reason to still own exposure to mid-cap stocks, though, that makes it worth it for most investors.

The first of these facets is, given enough time, mid-caps tend to outperform large-caps. That's because these companies tend to be mid-caps while at their growth sweet spot, when they're past their wobbly start-up years but before they become a major, self-sustaining corporation. The S&P 400 Mid Cap Index (SNPINDEX:^MID) has roughly doubled the S&P 500's performance since the early 90s. 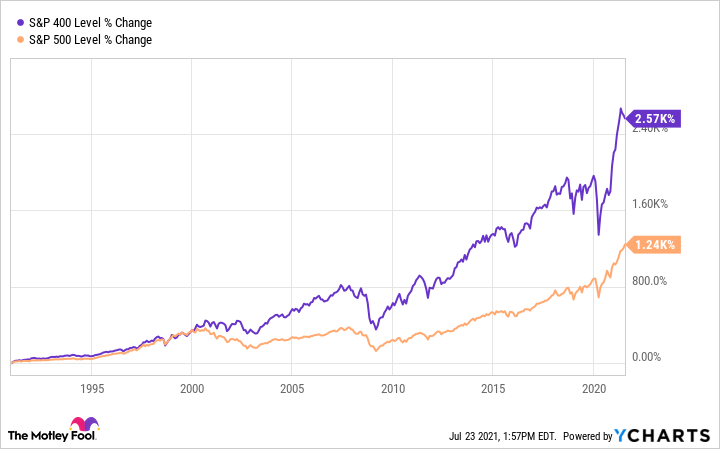 The other reason the iShares Core S&P Mid-Cap ETF may be a smarter choice than trading individual stocks for most investors? It forces you to think bigger-picture and long term, thus preventing you from being tempted by the misleading lure of so many so-called "story stocks."