Online dating conglomerate Match Group (NASDAQ:MTCH), has seen a meteoric rise in its stock price as of late -- up more than 60% over the last 12 months. While part of this performance is certainly attributable to the company's solid financial results, the stock has also seen its valuation increase dramatically.

But with plenty of stock gains now in Match Group's rear-view mirror, it's hard not to wonder whether the company still has an open road ahead. Let's see if Match Group can continue to deliver market-beating returns from here. 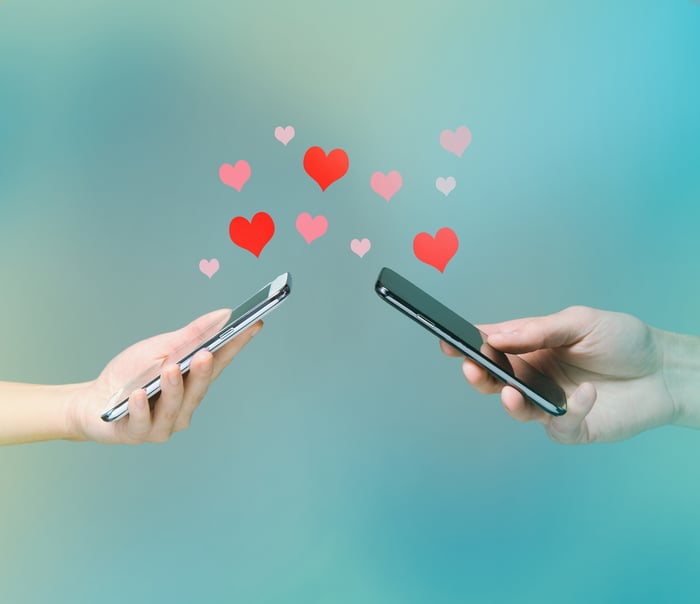 Before diving into Match Group's stock, it's important to understand the underlying business and the industry it operates in.

Match Group was initially created under parent company IAC/InterActiveCorp (NASDAQ:IAC) as a way to combine all of the company's separate dating sites into one entity. Today, after being officially spun out of IAC in 2019, Match Group operates as an independent public company that's home to dozens of online dating brands.

While dating has been around for centuries, it wasn't until just recently that matchmaking started to become increasingly digital. Today, roughly 40% of all heterosexual relationships begin online -- that's double the percentage from a decade ago.

Match Group has some advantages

In online dating, users tend to go wherever they can find the most potential partners. This means that apps with the largest existing user bases tend to have an easier time attracting new users -- also known as a network effect. And since Match Group is home to two of the most popular dating apps -- Tinder and Hinge -- the company continues to grow its subscriber base even while spending less to acquire it.

For reference, four years ago, Match Group grew its first-quarter average subscriber count by just over 800,000 people and spent 36% of its revenue on sales and marketing expenses in order to do so. Compare that to its most recent quarter in which Match Group grew its subscriber base by roughly 1.2 million people and only had to spend 22% of its revenue on sales and marketing. This network effect should help Match Group generate even greater profit margins as it continues to grow.

But it's not just the company's size that gives it an advantage. Match Group's conglomerate-style corporate structure creates benefits for the company as well. As Match Group brings new subsidiaries under its umbrella, the companies are able to offload their administrative expenses such as human resources, legal, and accounting to the parent company. Having this one centralized back office creates cost synergies for Match Group as a whole. Additionally, the new subsidiaries are also able to accelerate their own growth by leveraging the expertise and best practices of the other dating apps under Match Group's umbrella.

Match Group currently trades at a price-to-trailing-12-month free cash flow of more than 50 times. While that certainly looks like a premium at first glance, management believes it can reach an operating margin of 40% over the long term thanks to the company's competitive advantages. For reference, the Match Group's operating margin was only 31% in 2020.

But it's not just the improved profitability that bodes well for Match Group. Since the company was spun off, it has compounded revenue at a double-digit percentage rate every single year, a trend that shows no signs of slowing down. According to the company's financial outlook for 2021, management expects revenue to grow by 15% to 19% in the coming year.

So even though Match Group's forward-looking returns might not appear as appealing as they were a year or two ago, the company's steadily increasing operating margins and constant double-digit percentage revenue growth make the future outlook remain pretty bright.

Is It Too Late to Buy Match Group? @themotleyfool #stocks $MTCH $IAC Next Article
Current