What goes up must come down -- at least when the rally comes from speculation instead of fundamentals. And while AMC Entertainment's (NYSE:AMC) shares are still up by over 1,600% year to date, the movie theater operator looks poised for a massive crash because of its deteriorating balance sheet and seismic shifts in the film industry.

1. Streaming is the new normal

According to the Wall Street Journal, AMC's multi-bagger rally was driven by retail speculation and an intentional short squeeze. Fundamentals play a smaller role, but some investors may also be optimistic about the company's ability to bounce back from the coronavirus pandemic now that 56% of Americans above age 12 are vaccinated. AMC has reopened almost all its U.S. locations.

But unfortunately, the new normal isn't looking so normal for AMC. 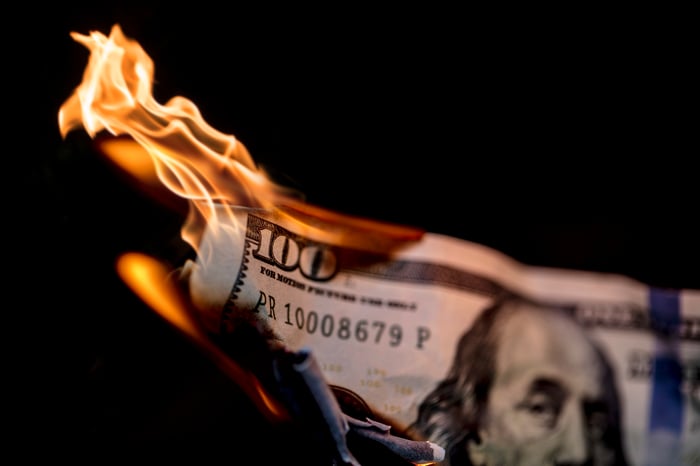 In July, Disney (NYSE: DIS) released Black Widow, the first Marvel movie to hit theaters since the pandemic. Unlike prior Marvel releases, Disney also made the film available on its streaming platform Disney+ through Premier Access, a service that allows users to rent it for a one-time charge of $30 on top of the service's regular subscription fees.

Black Widow earned $78 million from domestic theaters in its opening weekend compared to at least $60 million from Premier Access.

The film's success on Premier Access is a terrible trend for the traditional U.S. movie theater industry. Unlike theatrical releases, Disney won't have to split ticket sales with the theaters, resulting in higher profits for the House of Mouse. Online releases also boost Disney's competitive moat against streaming rivals like Netflix and could help drive subscriber growth.

It is unclear how long Disney plans to continue its dual-release strategy, but if it becomes permanent (or if other studios follow suit), AMC could become an unnecessary middleman in an industry it once dominated.

With AMC's future uncertain, investors should pay attention to the company's current performance. That picture isn't pretty. First-quarter revenue tanked 84% to $148 million -- a slight improvement from the fourth quarter (when sales were down 89% against the prior year), but not much evidence of a strong recovery. The company is also burning through cash, reporting negative operating cash flows of $313 million in the period.

With just $813 million in cash and equivalents on its balance sheet, AMC will probably need to tap the debt and equity markets to sustain operations. And with $5.4 billion in corporate borrowings and $4.9 billion in operating lease liabilities (deferred rent for some of its properties), its balance sheet is already in bad shape.

Considering these challenges, AMC has no business trading for a market cap of $19.5 billion, which represents a jaw-dropping 43 times its 12-month revenue. Even if the company recovered to its pre-pandemic sales figure of $5.5 billion (which looks unlikely), that would give the stock a price-to-sales (P/S) multiple of 3.5, which is quite a premium for a company with a busted balance sheet that struggled to earn consistent profits even before the pandemic. (AMC reported a net loss of $149 million in 2019.)

The symbiotic relationship between film studios and movie theaters is breaking down. And this could turn AMC Entertainment into an unnecessary intermediary in film distribution. The company's financials are also in shambles, which could mean more debt and equity dilution in the future. AMC's stock shouldn't be trading for such a high valuation in light of these challenges.