Stapley said he "can think of no one more qualified to lead our financial organization." Chambers' background includes a number of financial management roles with peer company, Illumina (NASDAQ:ILMN), and most recently as CFO with medical technology company, Outset Medical (NASDAQ:OM). So I believe that Stapley's ringing endorsement is sincere. But do his words of praise make Veracyte a buy? 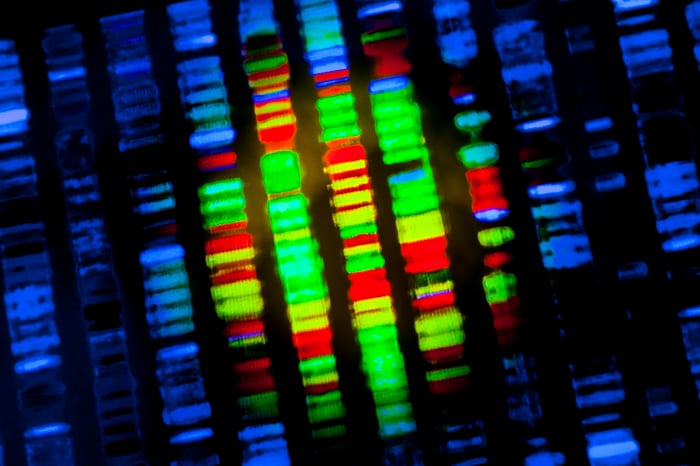 What does Veracyte do?

Veracyte is an emerging player in the diagnosis of several diseases, including:

The company nearly doubled its revenue from $65.1 million in 2016 to $120.4 million by 2019. It was clear that the company's sales growth in genomics diagnostics was firmly heading in the right direction -- until COVID-19 began to wreak havoc in March 2020.

While the company still managed to hold up relatively well in 2020, delivering $117.5 million in net revenue during the year, the closure of hospitals and doctors' offices put a damper on its momentum.

Who is Rebecca Chambers?

The announcement of the previous CFO Keith Kennedy's retirement, which became effective in May, was a notable loss for the company given that the company outperformed its peers by over 1.4 times and the S&P 500 by over 7.3 times during his tenure with the company from November 2017 to May 2021.

With the appointment of Rebecca Chambers to the CFO position, Veracyte gets back much of what it lost through a capable replacement to Kennedy.

Under Chambers' tenure of senior management positions at Illumina from 2012 to 2019, which culminated in her role with the company as Vice President of Financial Planning and Analysis, Illumina's full-year revenues soared from $1.15 billion in 2012 to $3.54 billion in 2019.

In addition, Illumina's diluted earnings per share (EPS) skyrocketed from $1.13 in 2012 to $6.74 in 2019 under the leadership of Chambers among her other colleagues.

The CFO is often the difference between a company's success or failure to establish itself as a serious competitor within its industry, and the genetics testing business is no exception. The CFO position at a multi-billion dollar company involves so much more than being a good steward of its resources and overseeing the accurate accounting of financial transactions.

Alongside the CEO and Board of Directors, CFOs play a major role in influencing the future direction of a company. Any missteps or miscalculations by a CFO such as expanding into a market too rapidly and depleting a company's resources could lead to bankruptcy. On the other hand, not knowing when to be aggressive with a company's expansion plans can also lead to a loss of market share to competitors.

Fortunately, Chambers' experience with Illumina in sustainably growing the company's revenue and profits should translate well at Veracyte, given the similarities of the two businesses.

Citing factors such as the "increasing emphasis on early disease detection and prevention, growing demand for personalized medicine, and increasing application of genetic testing in oncology," market research firm Mordor Intelligence estimates that the genetic testing market is expected to grow by 10.5% annually from $7.8 billion in 2020 to $14.2 billion by 2026.

There are established players in this market, including Illumina. Similar to Veracyte, Illumina provides genetics testing products, but a wider array of products covering not just cancer research products, but reproductive health products and microbiology products among others.

The good news for Veracyte is that Mordor Intelligence sees the industry as balanced between being fragmented -- calling it a "highly competitive market without dominant players" -- and consolidated, with one to five major players.

Since no single company is positioned as the clear industry leader, and the overall market will remain competitive to meet the anticipated spike in demand, there is room for smaller players such as Veracyte to increase their piece of the pie.

Should you go long on Veracyte?

Chambers is the type of CFO who has demonstrated her competence in the genetics testing industry in the past during her time at Illumina, which bodes well for Veracyte moving forward.

I would argue that the appointment of Chambers as CFO and the growing momentum of the company's products played a large role in analysts' one-year price target for the stock of $65.14, which represents 75% upside from the current share price. Investors who are focused on growth stocks should consider opening a position in Veracyte before it achieves that potential.

After Naming a New CFO, Is This Genetic Diagnostics Company a Buy? @themotleyfool #stocks $VCYT $ILMN $OM Next Article
Current