Many investors probably haven't even have heard of these big winners.

Wall Street closed the week on a down note, with major market benchmarks giving up ground on Friday to finish the month. The Dow Jones Industrial Average (^DJI 0.00%) held up the best, while progressively worse performances for the S&P 500 (^GSPC -0.19%) and Nasdaq Composite (^IXIC -0.51%) still amounted to no more than a modest pullback overall.

During much of the week, high-profile earnings reports dominated the news. On Friday, however, the two biggest gainers in the S&P 500 were stocks that many investors don't know at all. Below, we'll look more closely at why DexCom (DXCM 0.92%) and KLA (KLAC 1.27%) found themselves atop the market leaderboard.

Shares of Dexcom rose 13% on Friday. The maker of glucose monitoring systems saw strong performance in its most recent financial report.

Dexcom saw dramatic sales growth in its business during the quarter. Revenue rose 32% from year-ago levels to $595 million. Sales in the U.S. were up 26% year over year, while international revenue jumped an even stronger 58%. Dexcom remained profitable, although adjusted earnings of $0.76 per share were down $0.03 from year-earlier numbers. 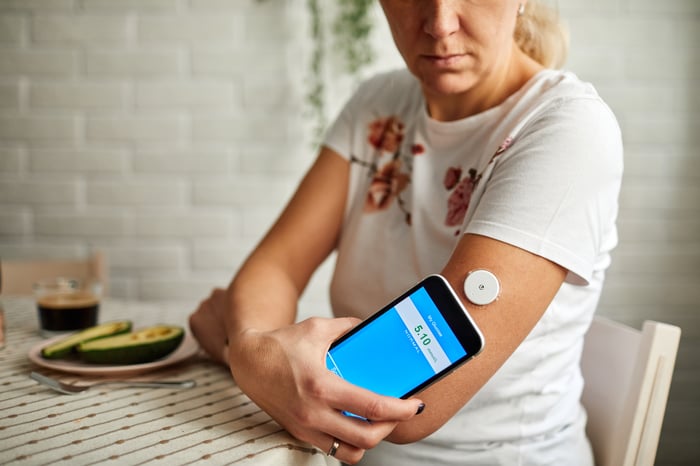 The future prospects for Dexcom also look attractive. Trial data suggest that the company's continuous glucose monitoring platforms are leading to superior outcomes for users, and Dexcom is excited about potential upgrades like the next-generation G7 monitor to give patients even more effective equipment for help in treating diabetes.

Millions of people need glucose monitoring, and Dexcom's solutions have real advantages compared to traditional methods for measurement. It's true that the company faces competition from some much bigger players in the market. However, Dexcom has demonstrated a surprising ability to hold off some of its larger rivals and keep building market share. Even after today's big jump in the stock price, Dexcom has a long way to go before it has fully tapped into its fast-growing market.

KLA reported revenue of $1.93 billion, which was up 32% from the same quarter a year ago. Adjusted net income soared by more than half, resulting in adjusted earnings of $4.43 per share, which dramatically surpassed expectations.

Shareholders also got their rewards for sticking with KLA. The company announced a 17% boost in its quarterly dividend, which will now be $1.05 per share. Moreover, KLA now has the ability to spend as much as $2 billion on stock buybacks. That's consistent with the company's previous track record of returning capital to shareholders, who received $1.5 billion during fiscal 2021.

KLA is optimistic that the good times will continue for a while to come. Fiscal first-quarter guidance calls for revenue of $1.92 billion to $2.12 billion, with adjusted earnings between $4.01 and $0.89 per share. That's a pretty wide range, but the ongoing growth that the guidance implies bodes well for those who've been increasingly nervous that the semiconductor market would have to go through a cyclical downturn at some point in the not-too-distant future.