Shares of Biogen (NASDAQ:BIIB) soared in June after the U.S. Food and Drug Administration (FDA) granted accelerated approval for the company's Alzheimer's drug, Aduhelm. The stock price reached more than $468 on June 7, but it hasn't been anywhere close to that level since then. Today, with the stock a lot closer to $300 than $400, it's clear that the excitement surrounding Biogen has cooled.

Investors looking for a top growth stock may be sorely disappointed with the healthcare company if they buy in today. Biogen is in a tough spot; it has reported soft sales numbers in its most recent quarters, and the many question marks surrounding Aduhelm -- and how many doctors may end up prescribing it -- only make it a riskier investment. 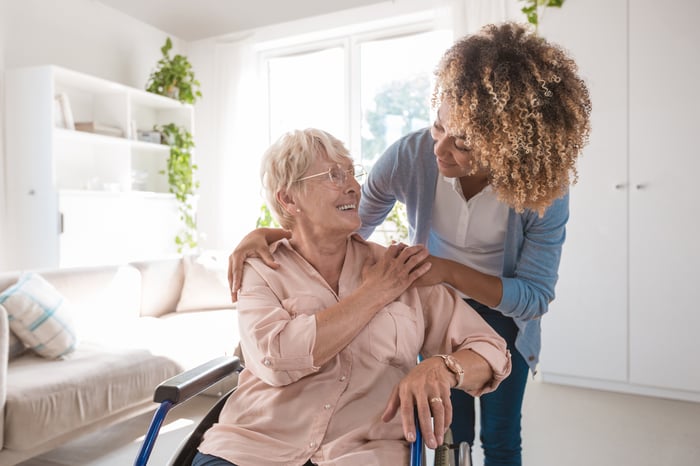 The company beat expectations in its most recent quarter, but that's nothing to get excited about

On July 22, Biogen reported its second-quarter results for the period ending June 30. Its adjusted per-share earnings of $5.68 came in higher than the $4.55 that Wall Street analysts were expecting. But despite that performance, there are still significant concerns for investors, as the company's sales of $2.8 billion declined 25% year-over-year.

A big reason for that was that its top-selling drug, Tecfidera, generated just $487.6 million in revenue during the period -- down from $1.2 billion in the same quarter last year. Biogen lost having patent protection on the multiple sclerosis drug as of a year ago, leaving room for more competition and generics to chip away at its market share. As a result, the company is forecasting revenue of up to $10.85 billion in 2021, which would be a 19% decrease from 2020's numbers. That projection includes the assumption of "modest" revenue from Aduhelm. Biogen notes that Tecfidera is a high-margin product for the business, and that loss in revenue is also felt in its forecast for adjusted earnings per share this year, which the company expects to come in no higher than $19. That's a steep decline of 44% from the $33.70 in adjusted profit Biogen reported for 2020.

Don't expect Aduhelm to come to the rescue

The approval of Aduhelm could lead to some significant opportunities for Biogen. Analysts project the Alzheimer's drug could hit annual revenue of $4.8 billion by 2025. However, that target is still well in the future -- and although the FDA did give it the green light, it was under an accelerated approval pathway. That means that the approval can still be withdrawn, as the drug will need an additional trial before the FDA completely signs off on it.

In the meantime, the company could face resistance from healthcare professionals who aren't convinced of its effectiveness. On Biogen's earnings call in July, management stated that "a few centers have indicated that they will not provide access to Aduhelm for now," and while the pace is "a bit slower than what we assumed, ... we are making tremendous progress with some positives and some headwinds." To say that the FDA's approval of the drug was controversial would be an understatement; multiple members of the agency's Peripheral and Central Nervous System Drugs Advisory Committee have resigned over it. Many members simply weren't convinced that the drug proved effective in treating Alzheimer's.

And to make matters even worse, drugmaker Eli Lilly recently obtained a breakthrough therapy designation from the FDA for its Alzheimer's drug, donanemab. The designation can help expedite the approval of the treatment, currently in phase 3 trials; if approved, it could prove a formidable rival to  Aduhelm. Analysts believe it could not only be more effective but even cheaper than Aduhelm, which costs $56,000 per year.

Is now the time to sell?

Biogen is facing some serious headwinds, and the rush of excitement from the approval of Aduhelm likely sent the stock to heights it shouldn't have reached in the first place. Expecting that it will get back over $400 could be wishful thinking. With sales falling and Aduhelm still a big question mark, it's hard to be too bullish on the stock today.

The company has many drugs in phase 3 trials that could boost its sales, but it has been Aduhelm's potential that has generated much of the excitement. And unless the company can put those concerns to rest with a strong trial that definitively shows Aduhelm can effectively treat Alzheimer's, it will be a long shot to get back to the highs it reached earlier this year. Foolish investors are better off investing in these growth stocks instead.