Canopy Growth (NASDAQ:CGC) was once the king of marijuana producers in Canada. However, the company has recently fallen on hard times. Over the past six months, its stock has fallen by 42% -- with no end in sight.

Even after the sell-off, the stock is still ridiculously expensive at 12 times revenue. That's not good, considering investors are getting wary about the company's ability to turn a profit. So can Canopy Growth stage a turnaround by the end of next year? 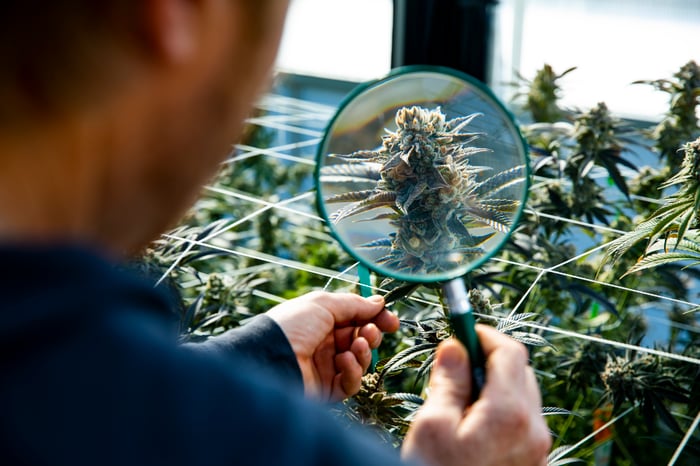 During its 2021 fiscal year (ended March 31), Canopy Growth's revenue was up 37% year over year to CA$546.6 million. However, the company suffered an operating loss of CA$1.243 billion -- still a large number, albeit an improvement over the CA$1.669 billion it lost in 2020. A big reason behind Canopy Growth's woes is its focus on cannabis 2.0 products like edibles, vapes, beverages, etc., instead of dried cannabis with high THC (tetrahydrocannabinol, the chemical in cannabis that gets users "high"). At the end of the day, consumers enjoy the drug due to its "buzz" sensation and want to take the path of least resistance to get there.

As a result, the company is running into major issues with unsold inventory and overexpansion of production facilities. These expenses totaled more than CA$564 million in the past year.

One competitor, Hexo (NASDAQ:HEXO), has had far more success in its dried cannabis sales. The company also holds a leading market share in the Canadian beverage industry due to its focus on THC-infused drinks instead of CBD ones. (CBD, or cannabidiol, is another, non-psychoactive component of cannabis.) In fact, none of Canopy Growth's weed strains are among the most sought-after by consumers.

Management claims to expect that Canopy Growth will become profitable by the end of next year, but I don't think that's possible. For starters, the company is only targeting a loss reduction of CA$200 million over the next 12 to 18 months, which is far below what's needed to break even in terms of operating income.

What's more, it seems that Canopy Growth is betting all of its future success on the federal legalization of cannabis in the U.S. Unfortunately, President Biden has only gone as far as to support marijuana decriminalization -- not full legalization. The difference here is pretty vast. Without the latter, Canopy Growth will not be able to export its pot south of the border.

Some say President Biden may be behind the times on this one. But interestingly, there's an "America First" element to such an approach. After all, it's in Uncle Sam's best interest to keep domestic multistate operators (MSO) such as Trulieve and Curaleaf flourishing and bar foreign entrants from competing in the lucrative market.

And that state of affairs is not a good one for Canopy Growth. In 2019, the company announced the acquisition of MSO Acreage Holdings for $3.4 billion, contingent on the federal legalization of cannabis in the States. Now it appears that legalization is probably not going to happen until after the 2024 presidential elections -- if at all. Canopy Growth really needs a boost in sales from high-potency cannabis, and the domestic market is already too saturated for that.

One thing Canopy Growth has going is its recent acquisition of cannabis grower and dispensary operator Supreme Cannabis, completed last month. In the third quarter of 2021 (ended March 31), Supreme Cannabis grew its revenue by 40% to CA$13.6 million compared to the prior year's quarter. The company is also generating positive operating income, less non-cash items (EBITDA). In addition, Canopy Growth paid a pretty fair price for the acquisition -- CA$259 million for its revenue of CA$54.4 million annualized, which is far less than its own price-to-sales (P/S) multiple of 12.

Canopy Growth and Supreme together represent an 18.1% share of the Canadian marijuana market. This puts the combined entity on par with other industry giants like Hexo and Tilray. But the deal won't be enough to reverse Canopy Growth's fortunes. Investors should expect the stock to continue its sell-off as worries about its profitability and a botched U.S. expansion mount. The same problems plaguing the marijuana company now are likely to continue well into next year.