General Electric (NYSE:GE) was once a power-production powerhouse. Electricity-producing turbines, in fact, were the company's single biggest business as recently as 2017. And then it all unraveled.

A (now-fixed) turbine design flaw prompted would-be power producers to pause their purchase plans. And then clean-burning natural gas power started falling out of favor as more solar power alternatives became readily available. GE's power turbine revenue is now down to about half its peak levels. This sales contraction has taken an even bigger bite out of the company's bottom line.

Investors would be wise to take note of an undercurrent of change going on. It could be an indicator that GE's once-great power business is on the mend. 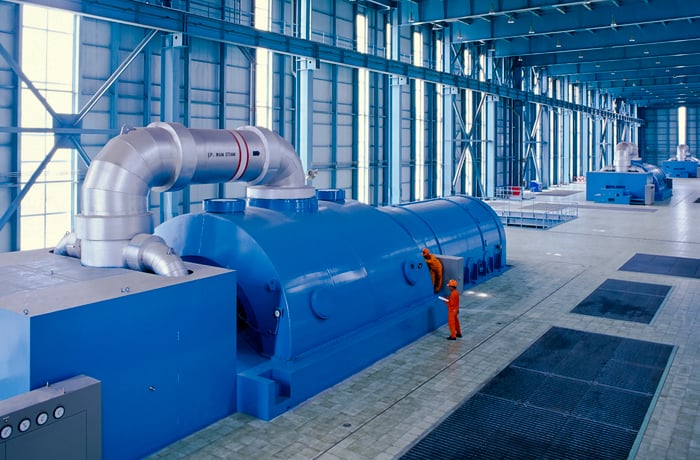 From retreat to regroup

It's admittedly difficult to distinguish between organic growth driven by rising demand and growth that's merely the mathematical result of last year's COVID-19-prompted shutdowns. For most companies, it's probably a mix of both.

For General Electric's power turbines business, however, it's likely to be much more related to organic growth. Utility companies plan million-dollar investments years in advance and then service the turbines they purchase for 20 years or more. A headwind spurred by temporary shutdowns meant to keep consumers at home isn't a major hiccup for the power-production industry.

Knowing this helps put the graphic below in the proper perspective. Last year's tepid orders and revenue for GE's power division aren't the result of the coronavirus contagion. Rather, the business began contracting in 2018 when a handful of turbine blade failures knocked too many GE-made gas turbines out of use for too long. General Electric was quick to start the response, but its institutional customers remained reluctant until it was clear the company's turbines weren't going to be out of commission for long periods. 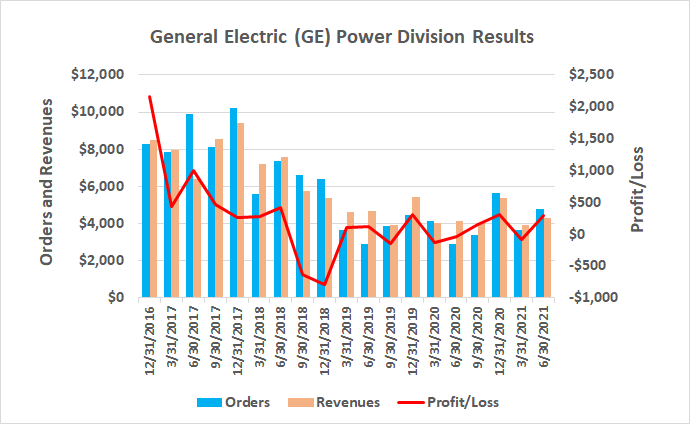 Data source: General Electric. Chart by author. All figures are in millions.

It's also naive to ignore that alternative energies enjoyed a major revolution around the same time GE's turbine fan blades began to fail, steering capital investments away from older technologies and toward cleaner and greener ones. Numbers from IHS Markit indicate the pace of annual installations of photovoltaic panels more than doubled between 2015 and 2019, more than doubling the world's solar power production capacity as a result during that stretch, according to data from the International Energy Agency. It would have been surprising if General Electric's power business hadn't run into a headwind.

But take a longer, closer look at the chart above. Namely, take note of the fact that at the very least, power's revenue and orders were stabilizing in 2020 -- despite the turbulence -- through the recently ended quarter. Equipment orders have also improved dramatically in two of the past three quarters. It's a subtle hint that the tide is turning for the better, even if most investors aren't yet seeing it.

Not losing ground any longer isn't necessarily the same thing as growing, of course, and to be fair, it could be years before GE's power unit comes anywhere close to reliving its glory days when $8 billion worth of revenue and a few hundred million dollars' worth of quarterly profit were the norm.

Don't be too quick to dismiss the potential of this piece of the company's repertoire, however, for a couple of reasons.

Chief among them is that as reliable as solar power is, it still faces the problem of not generating electricity at night. This challenge has been reasonably well addressed by battery-based energy storage. The solution, however, still lacks the "instant on" option most power producers need, particularly in the extreme heat of summer and the bitter cold of winter. A multipronged electricity production portfolio that relies on all available options seems to be the most plausible future.

A close-second reason to count on natural gas turbine demand for the foreseeable future is that the world just isn't ready to make this leap. In a long-term market outlook published just last year, the U.S. Energy Information Administration predicts that by 2050, 36% of the country's electricity will be produced by natural gas, down just 1 percentage point from 37% right now. That's despite renewables likely doubling their current portion of the nation's electricity production from 19% to 38% over the same 30-year span.

And to the extent that more clean-energy pressure is applied, GE's natural gas turbines can be made to run on hydrogen, which can be produced with a minimal environmental impact and -- eventually -- be produced cost-effectively. The company believes all of its turbines could be powered with clean hydrogen within a matter of years, which would make the question of natural gas's environmental impact moot.

The thing is, all of this undertow is evident in the numbers quietly disclosed by the company. As of the end of June, GE's power equipment and service backlog stood at $71.8 billion worth of business. That's more than four years' worth of business already lined up, not counting any new contracts signed in the meantime.

Investors looking for GE's power business to explode overnight are going to be disappointed. The company's customers aren't fast-moving consumers. Rather, they're corporations that can take months to decide to shell out millions on new equipment.

For long-term investors, though, power offers underappreciated upside that's on par with those of GE's renewables and aviation businesses. That bolsters the bullish case that already exists, based on continued cash flow growth even if the company is a bit riskier than the average blue chip here.