Despite amazing user growth, food delivery stocks are terrible investments. Their business models are simply not suitable for this continent. Let's look at why they are not the consumer goods stocks you want to buy. 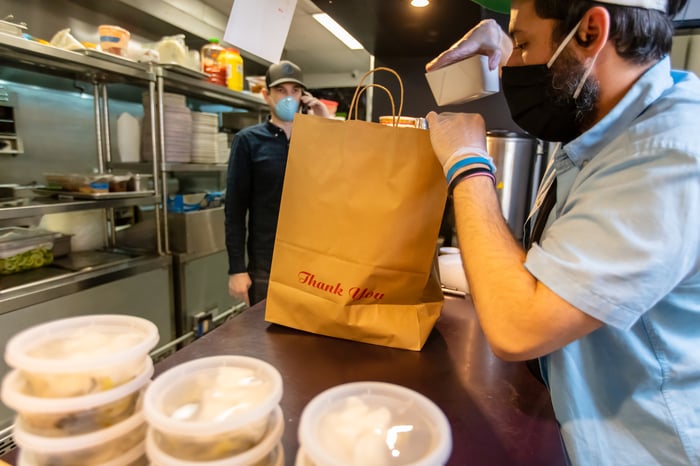 The poor economics of food delivery (in North America)

Food delivery companies' profitability is largely dependent on geographical location and urban planning. A food delivery worker in Paris can probably fulfill three to four orders on their bicycle within 30 minutes. But it could take the same amount of time for the same worker to drive from downtown Minneapolis to a nearby suburb to fulfill just one order. This is because European cities are typically more dense and compact than their American counterparts.

In addition, European delivery workers are often classified as employees instead of gig workers, which means they are paid a minimum wage no matter how many orders they fulfill. This ironically maximizes revenue for their employers. It is why European-oriented food delivery companies like Delivery Hero (OTC: DLVHF) are pretty close to becoming profitable while showing remarkable revenue growth. Things are not the same for food delivery entities in the U.S. and Canada.

No pay, no effort

Most delivery drivers didn't sign up for the altruistic goal of bringing delicious food to customers' doorstep. They are looking to make a living. Unfortunately, delivery workers are classified as gig workers in the U.S. and Canada -- not employees. This means that while they gain the freedom to work whenever they want, they lose out on benefits such as a minimum wage, sick leave, paternity/maternity leave, health insurance, reimbursement for work expenses (like fuel and vehicle repair), vacation pay, 401(k)s, and more. Even with base pay, promotions, incentives, and tips, Uber Eats drivers could make as little as $8 to $12 an hour.

At first glance, the slight variation in legal classification appears to save food delivery companies a disproportionate amount of money. But the overall effects of "cheaping out" on worker compensation are much more damaging. To maximize pay, drivers tend to go for orders with higher tips, which normally come from affluent neighborhoods. This leads to a shortage of drivers delivering to middle- or working-class communities. To ensure delivery times are fast, Uber Eats, DoorDash, and JustEatTakeaway must then raise the base pay for lower tip orders to incentivize drivers. These entities ultimately pay out of their own pocket to fill orders.

Profitability is a hard-to-solve issue

The question surrounding the delivery driver classification is controversial. Many drivers have no loyalty to their parent company and sign up for multiple delivery apps to see which one will pay the highest. Restaurants, which list on multiple delivery apps, will opt for the company that charges the lowest commission on their sales.

At the end of the day, a combination of traversing great distances, greater reimbursement needed to fill orders, and competition compressing margins means food delivery companies in North America won't become profitable anytime soon -- if ever. Investors should expect user growth to accelerate due to popularity, but losses to accelerate in tandem.

In the first quarter of 2021, JustEatTakeaway grew its revenue by 52% year over year to $551 million, but its loss increased to $75.5 million from $33.4 million in the prior year's quarter. Similarly, DoorDash's revenue rose 97.5% to $1.08 billion while its net loss widened 17.2% year over year to $129 million. As for Uber, its sales declined by 10.6% from Q1 2020 and it is facing similar problems in managing the unit cost economics of its ridesharing service.

The three companies are trading for between six and 14 times sales, indicating investors are hoping for their growth streaks to continue. However, one should understand that all three food delivery giants face severe problems with their business models. Until they figure out the proper economics behind making food delivery profitable, I suggest avoiding their stocks.