Insurance is one of the largest industries in the world, generating over $5 trillion in premiums each year. But it's also a highly fragmented industry. In fact, many of today's leaders have been around for a century or longer, and none has more than 4% market share. Moreover, these titanic enterprises were built on old technologies, meaning they weren't designed for state-of-the-art data science.

But Lemonade (NYSE:LMND) was built for big data. Here's why this stock could grow tenfold over the next decade. 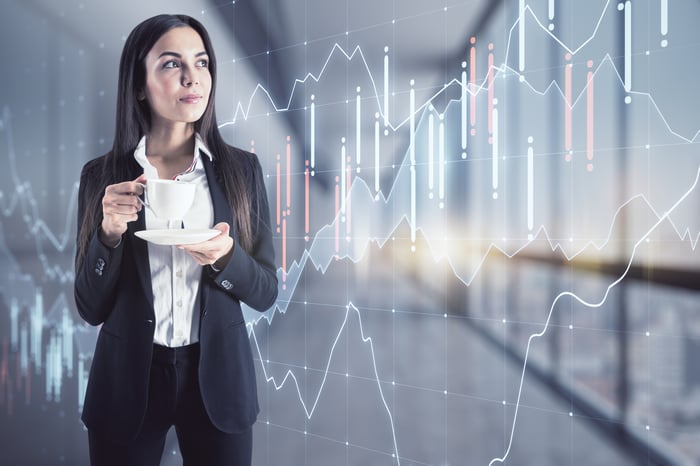 Lemonade is an AI-powered insurance company. Its digital-first, mobile-friendly platform currently offers homeowners, renters, pet, and term life policies across the United States, France, Germany, and the Netherlands. And recently, the company announced Lemonade Car, an auto insurance product slated to launch in the near future.

Collectively, management puts Lemonade's market opportunity at over $400 billion, and $300 billion of that figure comes from Lemonade Car. That means this new product could be a significant catalyst in the years ahead.

How is that possible? Lemonade uses AI chatbots to engage consumers, and its platform was designed for types of data that legacy systems can't capture. For instance, in addition to the standard questions, Lemonade also collects details like time of day, type of device, and length of time spent on the application. Using these clues, the company can predict risk by making correlations between seemingly unrelated data points.

Ultimately, this advantage should allow Lemonade to underwrite policies and detect fraud more effectively than its rivals. Put another way, its loss ratio (i.e. the percentage of premiums paid out in claims) should be lower than average, meaning the company should keep more cash. That, in turn, should drive lower prices for consumers.

Lemonade's second advantage is its unique business model. The bottom line is black and white for traditional insurers: Collect premiums and pay claims and expenses, and anything left over is profit. Of course, that creates a conflict of interest, as there is an incentive to deny claims.

To solve this problem, Lemonade takes a fixed-fee approach. In a nutshell, it keeps 25% of premiums, then uses the rest to cover claims and expenses. And if anything is left over, Lemonade donates the money to charity. That means the company doesn't benefit from denying claims, at least not to the same extent as legacy insurance providers. Put another way, Lemonade's values are better aligned with those of its clients.

It's still early, but Lemonade's financial performance shows promise. Its gross loss ratio dropped from 113% in 2018 to 71% in 2020, though it did spike to 121% in Q1 2021. However, that was due entirely to winter storm Uri in Texas, a market where Lemonade's business has historically been highly concentrated. On the bright side, the company is diversifying a little more each year.

More importantly, if you exclude the impact of those catastrophic losses, Lemonade's loss ratio would have been 71% last quarter -- roughly 11 percentage points lower than the industry average. That suggests that Lemonade's AI-powered platform is indeed more efficient than legacy systems.

More importantly, consumers love Lemonade. According to a report from Clearsurance, Lemonade is the most highly rated provider of homeowners and renters policies, and I think the company can take the top spot in the auto category after the launch of Lemonade Car.

Not surprisingly, Lemonade's ability to delight consumers has translated into significant demand, as evidenced by the company's rapid growth.

Looking ahead, Lemonade certainly faces some tough competition, and the stock currently trades at a very pricey 55 times sales. But disruptive tech companies often face similar situations, and none of those hurdles are insurmountable.

More to the point, Lemonade is building its business around big data, and I believe that will give the company a sustainable advantage. That should help Lemonade capture a good chunk of its enormous market opportunity. That's why this growth stock could grow tenfold by 2031.