Desktop Metal (NYSE:DM) reported second-quarter 2021 results after the market close on Wednesday that were "mixed," in Wall Street lingo. The 3D printing company's revenue was in line with analysts' expectations, but its bottom line fell short of the consensus estimate.

The company's biggest news on Wednesday, however, came minutes before the earnings release: It announced that it was acquiring The ExOne Company (NASDAQ:XONE), its most direct competitor in metal 3D printing, which also uses binder-jetting technology.

Shares of Desktop Metal (which began trading in December 2020 following the company's reverse merger with a special purpose acquisition company, or SPAC) rose 2% in after-hours trading, while ExOne stock skyrocketed 39.2%. 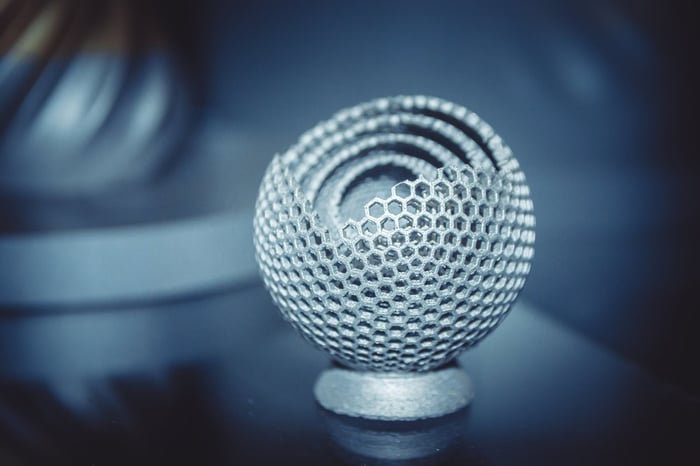 Wall Street was looking for a loss of $0.09 per share on revenue of $19.1 million. So, Desktop's loss was nearly double what analysts were expecting, while its revenue was essentially in line with the consensus estimate.

As with the first quarter, management didn't disclose organic revenue growth, which is growth excluding acquisitions made in the last year. So, investors can't know how well its core metal 3D printing business is performing. As I wrote in my earnings preview:

In addition, Adaptive3D will contribute to the company's Q2 revenue. In mid-May, Desktop announced it had acquired this Texas-based company, which it described in its first-quarter earnings release as "a category leader in printable elastomers.

After the quarter ended in July, Desktop made two more acquisitions: Beacon Bio, which adds a PhonoGraft biofabrication platform to its portfolio, it said in the earnings release, and Aerosint, which adds multi-material capabilities to its portfolio.

"ExOne shareholders will receive $8.50 in cash and $17.00 in shares of Desktop Metal common stock for each share of ExOne common stock, for a total consideration of $25.50 per share, representing a transaction value of $575 million," according to the press release.

The $25.50 price per share represents a nearly 48% premium to the closing price of ExOne's stock in Wednesday's regular trading session. Following the acquisition announcement, the stock soared 39.2% to close at $24.05 in the day's after-hours trading session.

"Upon closing of the transaction, current Desktop Metal shareholders will own between 85% and 88% and current ExOne shareholders are expected to own between 12% and 15% of the combined company, respectively," the companies said.

Desktop management expects the deal to close in the fourth quarter of this year.

I'm proud of the team's performance in the quarter delivering strong revenue growth and meaningfully expanding gross margins as our customer install base continues to grow. We continue to see significant opportunities to gain share in the additive manufacturing market by leveraging our industry leading product portfolio and diversified materials platform. The Company is firing on all cylinders as we make rapid progress delivering on our vision to accelerate the adoption of AM 2.0.

Management reiterated its revenue outlook issued earlier in the year, which excludes the impact of the ExOne acquisition. For 2021, it still expects revenue of over $100 million and projects that it will exit the year with an annualized revenue run rate of $160 million, again, excluding the contribution from ExOne.

In addition, it guided for 2021 earnings before interest, taxes, depreciation, and amortization (EBITDA) in the range of negative $80 million to negative $70 million, excluding the effects of the ExOne acquisition.

Investors should keep an open mind

I'd encourage investors to keep an open mind about Desktop Metal. It's too early to be overly bullish or bearish on this stock, in my view.

Management is using a largely growth-by-acquisition strategy. These strategies can be very successful if done right -- and I particularly like a couple of the company's acquisitions. That said, these strategies present additional challenges, as well as concerns for shareholders. One main business challenge is integrating all the acquisitions, and a concern for shareholders relates to the financing of the acquisitions. If financing is done by issuing stock -- as is the case with the bulk of the ExOne acquisition -- current shareholders have their ownership percentages diluted. Alternatively, a company can borrow money, but that adds to its debt load.