Like its competitors, Equinor (NYSE:EQNR) has been rebounding nicely so far this year. Norway's integrated oil and gas major just recorded arguably its best quarter since just before the oil crash of 2014. Equinor is now in a period of dividend raises, share buybacks, and debt repayment, a stark contrast from the dividend slashes and debt increases we saw last year.

With a recovery in full swing, Equinor is in better shape now than it was before the pandemic. Let's break down the company's financial health to determine if it is a good buy now. 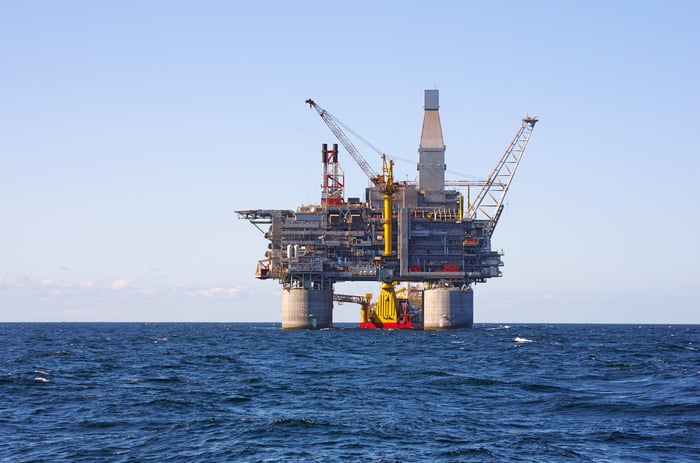 Equinor and its competitors largely live and die on oil and gas prices. But to its credit, Equinor has done a good job improving the quality of its business to produce positive free cash flow (FCF) even at lower oil and gas prices.

Equinor's breakeven levels vary by region. For example, it can breakeven at just $15 per barrel Brent on its assets in the Johan Sverdrup oil field in the North Sea, and around $30 per barrel in the Gulf of Mexico. Equinor has been strict about only developing plays with low production costs. For example, Bacalhau Phase I in Brazil has a breakeven below $35 per barrel, and Equinor forecasts that the average breakeven price of assets developed after 2030 will be $35 per barrel or lower.

Once Brent is above $35, then it's just a matter of how much FCF Equinor can generate. For context, Brent averaged $41.69 in 2020, which is basically the level where Equinor is barely making enough money to pay its dividend. Equinor's long-term strategies are based on a Brent price between $50 and $60. In this range, Equinor can execute dividend raises, share buybacks, and growth projects, and keep its balance sheet healthy.

Brent crude oil has been above $60 per barrel since mid-February, which has given Equinor a lot of extra FCF to work with. Instead of opening the tap on spending, though, the company has been hard at work knocking debt off its balance sheet.

If you've followed Equinor for a while, you're probably familiar with the company's net debt to capital employed ratio. Similar to financial metrics used by other companies, Equinor's ratio is meant to represent its net interest-bearing debt as a percentage of the amount of money it has invested in its business. In simple terms, it shows how much Equinor is dependent on debt to grow its business.

Equinor finished the second quarter with a net-debt-to-capital-employed ratio of just 16.4%, which is on the low end of its long-term goal of 15% to 30%. At the beginning of the year it was at 31.7%. Therefore, Equinor is proving that it is wasting no time getting its balance sheet back into shape. 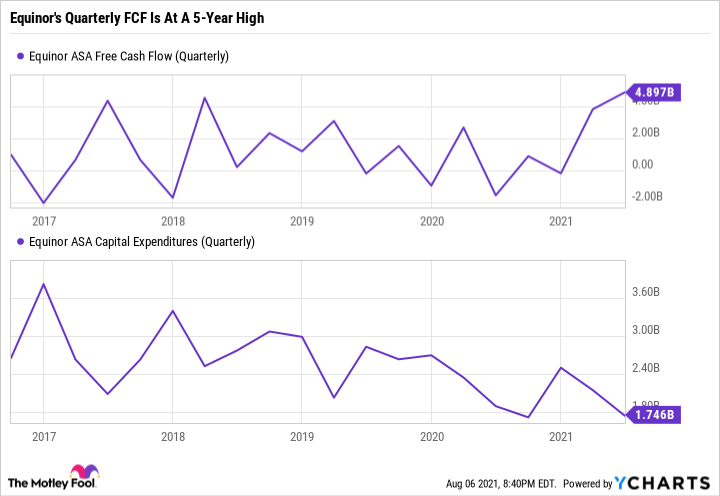 Equinor could have done any number of things with its excess FCF, but it chose to begin its recovery with a healthy balance sheet. Financial health is the foundation needed to justify Equinor's long-term growth projects, mainly in renewables. The company has been clear about its intentions to earmark over half of its growth capital for renewables by 2030, up from around 12% in 2021.

Now that Equinor's balance sheet is in a good place, the company can go ahead and support more dividend raises and share buybacks. Equinor's quarterly dividend is $0.18 per share, two-thirds of what it was at the end of 2019. But if oil and gas prices stay high, it wouldn't be surprising to see Equinor continue raising its dividend.

When asked about mergers and acquisition (M&A) activity on Equinor's Q2 2021 conference call, CFO Ulrica Fearn indicated that the company's future was based on organic growth opportunities, and Equinor could even be a "net seller in the M&A space." This comment may have gone unnoticed by some, but it could also be seen as a valuable nugget that shows where management expects to take the business.

It could be argued that this comment encapsulates Equinor's plans to divest away from fossil fuels toward renewables, capitalizing on the short- and medium-term upside of oil and gas in the process.

The reality is that Equinor is taking a gamble on offshore wind energy, and keeping its balance sheet healthy helps tilt the odds in its favor. Equinor will make mistakes and suffer project setbacks, and could even lose money on a few of its first wind projects. The more wiggle room it gives itself, the better chance it stands.

Overall, Equinor seems like a balanced dividend stock worth buying for investors that value financial discipline and are looking to generate income from their portfolios.