The apparel and lifestyle company has a new lease on life, and investors seem bullish.

Investors and Wall Street analysts alike seem enthralled with the now stand-alone Victoria's Secret (VSCO 3.06%) after its Aug. 3 spin-off from Bath & Body Works (BBWI 1.36%),  formerly L Brands. Over its brief history, its stock price has risen more than 62% to climb to nearly $75 a share, while it has been showered with bullish ratings by major investment firms, with price targets as high as $100 a share.

Some investors might wonder if this stock market renaissance is truly justified, given that Victoria's Secret for many years was viewed as the millstone around L Brands' neck, dragging it down toward bankruptcy. However, there are at least four reasons the current optimism may be valid and the company's future prospects may indeed be strongly bullish. 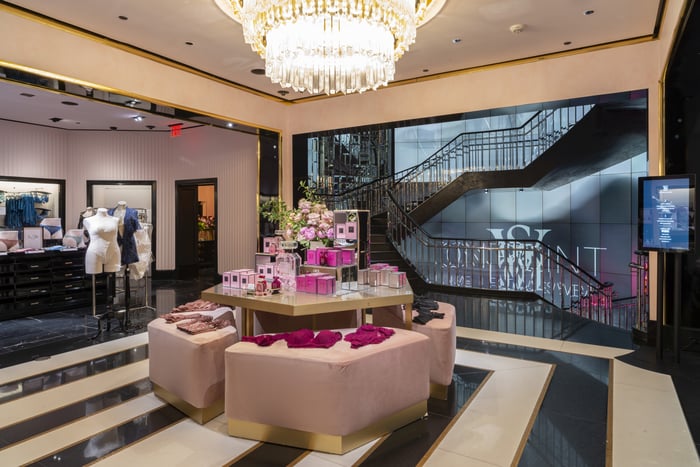 1. A lot of the turnaround was already accomplished

After its attempt to sell off the Victoria's Secret brand fizzled during the first impact of the COVID-19 pandemic lockdowns, L Brands set about reforging its ailing subsidiary for better performance. It carried out closures of underperforming stores with ruthless efficiency after the early 2020 divestiture failed, cutting its 909 stores in the U.S. by 235 locations and permanently shuttering three of its 144 Pink brand stores during 2020, with additional closures overseas. Between 30 and 50 more stores were slated to go on the chopping block in 2021.

Hewing out the deadwood and other turnaround initiatives already began paying off before the spin-off. For the first quarter of 2021, L Brands' earnings report contained separate data for Victoria's Secret, then still a subsidiary. The brand's Q1 comparable sales surged 9% compared to Q1 2019, before the pandemic, indicating the strength of the turnaround. While the 2020 store closures caused quarterly revenue overall to drop 7% relative to Q1 2019 at $1.55 billion, direct channel sales skyrocketed 44% compared to 2019 and 69% from 2020. With Victoria's Secret even leaner now, there seems little reason to think these positive trends won't continue and strengthen.

2. It's free from the baggage of the past

By separating from L Brands and its associations with Les Wexner, Jeffrey Epstein, and similar troublesome figures, Victoria's Secret has begun to escape the aura of scandal previously weighing down its reputation. Accusations of sexism, misconduct, and connection to questionable dealings have been more clearly severed with its departure from the L Brands umbrella, and a new chapter has begun with a fresh outlook.

The same applies to Bath & Body Works, which has buried the L Brands name and all its associated skeletons. It made a clean break between its soaps, body care products, fragrances, and scented craft-style candles, with their refreshing, fun, upbeat imagery; and it broke from the publicly tarnished sexual connotations of the L Brands version of Victoria's Secret. Both companies appear to have made a good-faith effort to put the Les Wexner era firmly behind them.

3. Its spin-off structure was good for investors

Existing L Brands investors have every reason to be pleased with the spin-off. At no extra cost to themselves, they now own shares in two companies, each of which was already seeing a strong turnaround prior to the divorce. Bath & Body Works shareholders received one Victoria's Secret share for every three Bath & Body Works shares they held on July 22, while also keeping those shares in Bath & Body Works. Whether one company or both thrives, these stockholders will benefit from the deal.

Wall Street certainly sees a bright future for its investments. J.P. Morgan analysts assigned a $100 per share price target by 2022's end, with its research note saying its "model conservatively embeds +2.9% same-store sales in FY22/23." It also expects Victoria's Secret to add at least $300 million in women's swimwear products revenue and remarks the company is operating in the "global intimates and loungewear industry" which is expected to have a 6% to 8% compound annual growth rate (CAGR) through 2025.

The most difficult advantage of the new Victoria's Secret to quantify is its rebranding and "personality," for which, of course, no specific metrics exist. Before the spin-off, some commentators suggested its sales might decline or even crater when it removed its scantily clad, classically attractive "angel" models, substituting models with various ages, genders, and body types along with heavily politicized branding.

Newly minted CEO Martin Waters said the spin-off is "an exciting milestone as we embark on our journey as a newly independent public company, focused on inspiring women around the world with world-class products and experiences." Shedding its former focus on eroticism and, by implication, couples, Victoria's Secret now casts itself as mainly concerned with political issues such as women's empowerment and advocacy, equity, inclusiveness, and so forth, and it emphasizes individual "experiences" instead of relationships as a lifestyle basis.

A large demographic currently exists that agrees with these ideas. Their patronage will probably drive sales growth medium-term to long-term. Victoria's Secret is now "selling" the idea of empowerment and similar political concepts, concepts with which at least a plurality of the population and the vast majority of the business and media world are in agreement.

In this, it may resemble a very different company, electric carmaker Tesla, where enthusiasm for the "vision" and "ideas" of founder and CEO Elon Musk have generated a high share price and massive enterprise value despite many missed deadlines and relatively modest production and sales numbers. Beyond Meat is attempting something similar with its focus on animal welfare and eco-friendliness, even if its plant-based meats aren't exactly healthy foods.

Rather than simply being about the products, Victoria's Secret now appeals to a whole political culture, selling "athleisure" clothing, fragrances, and so on with the aura of women's empowerment, a strategy likely to reap significant benefits at both the top and bottom lines.

In short, much of the heavy lifting of Victoria's Secret's turnaround was already done long before its spin-off as an independent company; and its political, cultural, and idea-based appeal to a significant customer demographic gives it a solid base of demand into the future. Investor and Wall Street bullishness appears likely to be justified, and this looks like one of the more promising apparel stocks or consumer discretionary stocks going forward.

Why Victoria's Secret Stock Jumped Sharply at the Open Today

Can Victoria's Secret Rekindle Its Past Success?
376%