These companies are securing their future by becoming indispensable to their customers.

If you're optimistic about where the cannabis industry will be in 2031 -- and you probably should be, given that the market is expected to grow -- it's a good idea to buy and hold a handful of the best marijuana stocks on offer.

The three companies I'll discuss today each address a different aspect of the marijuana market. And they each have a clear path to steady but massive growth, even if they're just starting to realize it at the moment. Let's dive in and see why they might be good additions to your portfolio. 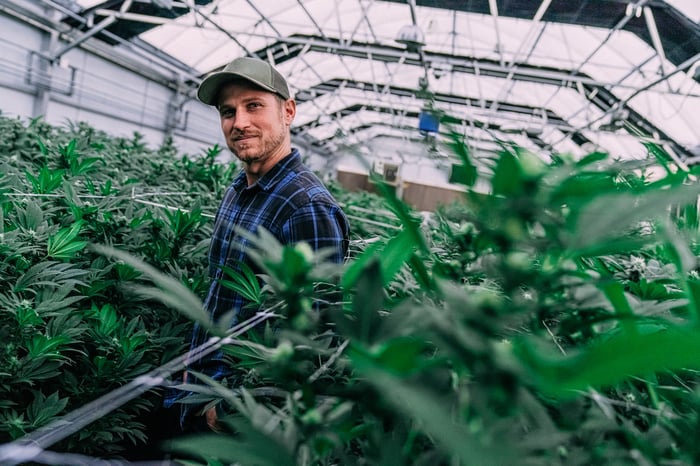 Scotts Miracle-Gro (SMG 0.94%) sells the nutrients, fertilizers, hydroponics gear, and grow lights that cannabis farmers can't get enough of. It also sells a huge collection of home gardening stuff, like pesticides and herbicides. Between these two segments, Scotts serves backyard tomato gardeners and the titans of the marijuana industry alike. And it's the latter of those two that make the stock worth holding for the next decade.

Even as sales from U.S. consumer gardening gear waned by 4% in the third quarter compared to the prior three months, revenue from cannabis cultivation-related products exploded by 48%. As if that weren't enough, management predicts that revenue from marijuana farming products will end 2021 up to 45% higher than in 2020.

Provided that the cannabis industry continues to grow as quickly as expected, it's hard to envision a future where Scotts' products aren't increasingly in demand too. If cannabis is legalized in more jurisdictions, there will be even more regional markets to enter and power future growth. Best of all, investors don't need to worry about the company's approach to the ever-shifting particulars of consumer preferences for cannabis products. Scotts doesn't need to sell a single bud of marijuana flower for its customers to keep coming back again and again.

Unlike Scotts Miracle-Gro, Green Thumb Industries (GTBIF 6.54%) is a consumer cannabis pure-play, meaning that it lives or dies based on the popular appeal of its recreational and medicinal marijuana products. So far, that doesn't seem to be a problem whatsoever, given its consistent and rapid revenue growth over the last five years. If the consensus estimate among Wall Street analysts is correct, Green Thumb could chalk up more than $800 million in net revenue this year.

Green Thumb's strengths are its distribution networks and the power of its brands. By Aug. 10, management expects that the company will have 62 retail locations spread across the U.S. in lucrative markets like Pennsylvania, California, and Massachusetts. In the coming years, even more stores will be on the way. While some of its markets are getting crowded with competitors, so far it doesn't look like that will be a problem, as same-store sales are growing rapidly.

As long as same-store sales continue to accelerate, the company will penetrate its regional markets even deeper. Much like how consumers have their preferred brands of beer or other packaged goods, customers are building loyalty to Green Thumb's brands, which will reduce the impact of competitors. Likewise, its plans to start offering cannabis delivery, through its digital and storefront experiences, opens up another differentiator which will help Green Thumb to keep growing over time.

Once revenue from delivery starts to pick up, there will be even less friction for consumers to buy the company's products. And that'll also reinforce its brand strength within the segment of customers who prefer not to purchase from its retail locations. Over the next decade, the combination of a growing base of loyal customers and efficient multi-channel distribution will make for a significantly larger top line than competitors.

And, if the company remains disciplined with its spending, there's a good chance that it could continue to be profitable for the next decade while it grows into its markets. For a cannabis cultivator, there's not much that gets better than that. 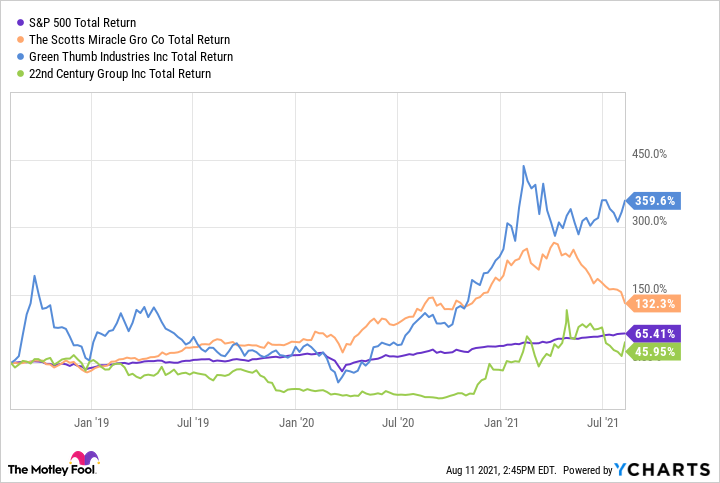 22nd Century Group (XXII) is a bit of an oddity because it doesn't sell cannabis to consumers, nor does it sell nutrients or hardware to marijuana farmers. Instead, 22nd Century's claim to fame is its intellectual property (IP), which covers its cannabis genetics technology. Using the company's hemp genetics know-how, its customers can increase the yield of relevant psychoactive chemicals from their own cannabis crops.

With more of the active ingredient in each plant, cultivators see their margins increase, so there's a significant incentive to license 22nd Century's tech. It also has a business unit which isolates and then sells the chemicals from plants grown in-house. So, there's more than one type of customer to do business with, which will support the durability of its revenue over the next few years.

Importantly, developing the plant genetics IP took some time, and it only started to deliver revenue recently. Management predicts that income from licensing should begin to ramp up in the second half of 2021, but that's probably just the start. Once cultivators get hooked on higher margins, they're unlikely to want to stop paying for 22nd Century's tech.

In addition, the company is constantly working on new genetic innovations for cannabis plants to boost yields even further. As its plant genetics platform becomes more and more refined, it could well become one of the most important suppliers in the entire marijuana industry.

Alex Carchidi has no position in any of the stocks mentioned. The Motley Fool owns shares of and recommends Green Thumb Industries and Scotts Miracle-Gro. The Motley Fool has a disclosure policy.