One of the easiest ways to evaluate a company's business is by looking at its statement of cash flow. Here investors can avoid a lot of the noise and pitfalls that can come with simply looking at a company's income statement, such as investment-related gains that help disguise bad bottom lines or low-margin revenue growth. There's not much to hide with respect to cash -- it either increased or it didn't. And the statement of cash flow shows you how that happened.

Three companies that are doing exceptionally well with regard to generating positive free cash are Align Technology (NASDAQ:ALGN), Workday (NASDAQ:WDAY), and Activision Blizzard (NASDAQ:ATVI). And with all of these businesses growing, there's likely more of the green stuff on the way. 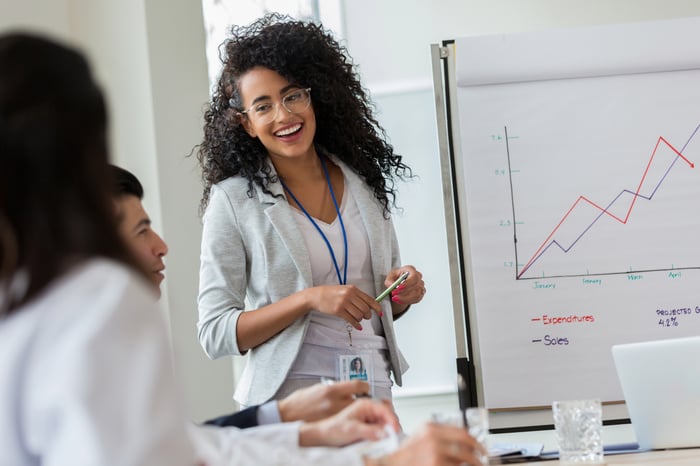 Align Technology makes a variety of dentistry products, most notably its Invisalign clear aligners, which are more convenient than braces. The company makes strong margins on the products that not only help it turn a profit but generate significant cash too. Over the past two quarters, the company reported $1.4 billion in gross profit on sales of $1.9 billion, for a gross margin of 75%. And that, in turn, helped the company net $400 million in profit.

What's even more impressive is that on revenue of $3.4 billion over the past 12 months, Align has generated free cash flow of $895 million -- which is some 26% of revenue. The company has consistently produced strong cash flow, and its 2020 free cash of $507 million was more than double the $243 million it brought in just three years earlier.

One of the benefits of a company that generates so much cash is it can return cash to investors. While Align doesn't pay a dividend, earlier this year its board of directors authorized a stock repurchase program worth up to $1 billion, which allows repurchases to be made over the next three years.

In the past year, the stock has risen more than 120%, outperforming the S&P 500's 32% gains by a wide margin. And it's easy to see why the company is a hit with investors. In its most recent quarterly results for the period ending June 30, Align's sales nearly tripled to $1 billion, and the company projects that its top line in 2021 will rise by up to 60% from the previous year. With growth like that, this healthcare stock could continue to climb even higher.

Workday makes cloud-based applications that can save businesses time and money through automation. At first glance, the business may not look that great on a cash basis given that it consistently posts losses. But a significant chunk of its expenses is paid out through stock-based compensation. In the fiscal year ending Jan. 31, Workday's stock-based compensation totaled more than $1 billion. Too many share issues can be problematic for a company and can drive down the share price in the process.

However, Workday's share-based compensation has been relatively stable with respect to revenue; over the past three years, it has come in at around 23% of its top line.For a company that's growing, all that dilution hasn't had a terribly negative impact for shareholders -- the stock has nearly matched the S&P 500, up 29% in the past year.

The model won't work for all situations, but with the business generating 19% sales growth last fiscal year and the top line up 53% in two years, Workday has been a solid growth stock. The company expects 17% growth in its subscription revenue this year, which accounts for the vast majority (88%) of revenue.

Strong revenue growth, combined with using stock-based compensation, allowed the company to net free cash flow of $1 billion last fiscal year, which represents 23% of revenue. Although it still results in dilution, stock-based compensation can provide the business some flexibility -- and at the same time give investors a bit more predictability in earnings with potentially fewer surprising share issues along the way.

As businesses continue to move more of their operations to the cloud, a company like Workday could see more demand for its products and services in the future, making it an attractive growth stock to buy. Plus, with $3 billion in cash and marketable securities on its books as of the end of April, the company has plenty of options should it want to make a big splash with an acquisition.

Activision is the popular gaming company behind such popular titles as Call of Duty and World of Warcraft. It benefits from a loyal fanbase, which translates into consistency and growth. Even though investors may be down on stay-at-home stocks with the economy opening back up, Activision has continued to do remarkably well.

When it released its second-quarter results on Aug. 3, the company reported revenue of $2.3 billion for the period ending June 30, which was not only higher than the $1.9 billion it reported a year earlier, but also came in higher than its guidance, which called for revenue of $2.1 billion. Over the past 12 months the business has brought in $2.5 billion in free cash flow on revenue of $8.9 billion, which is 28% of its top line.

A note of caution for prospective investors: Activision has recently come under fire for its purportedly troublesome work environment, and the allegations are serious. The company said it has a law firm reviewing its procedures to help address these issues, but its president and other senior executives have departed in the wake of this situation.

While the bad press has hurt the stock -- news of an employee walkout last month helped send the stock to lows not seen since last year -- it's worth remembering that investors tend to have short memories. However, the issues appear to be systemic and could have lasting implications on the company's ability to attract and retain talented employees.

It remains to be seen whether this controversy will impact operations over the long-term. But with a strong, cash-generating business that continues to produce solid sales growth, Activision's stock has already started to rebound, and it could be a smart long-term buy at its current price if you're comfortable betting on a cultural turnaround.