It's a bad time to be throwing capital at America's biggest rival.

Chinese stocks, many of them cherished by U.S. investors, have had a terrible year. The sector indicator, the iShares China Large-Cap ETF (FXI 1.31%), is down 11% year to date, far underperforming the S&P 500's 20% gain for the year. Notable fund managers such as ARK Invest's Cathie Wood have been aggressively reducing exposure in Chinese stocks as of late, leading to sectorwide cheap valuation.

But investors who buy into Chinese stocks now aren't getting bargains. Instead, they are purchasing potentially damaged goods that could be detrimental to the health of their wallets. A couple of weeks ago, I went into detail about two big reasons to stay away from Chinese stocks. Since that report, new developments have added even more justification for being cautious. 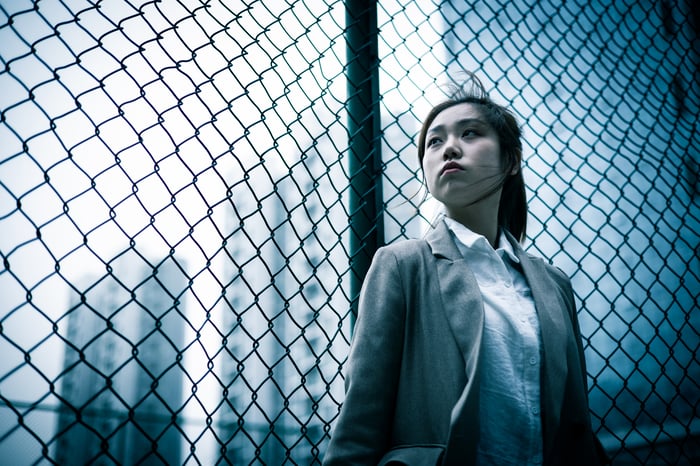 Just four decades ago, China was mainly an agrarian economy with little technological activity. Even though it caught up with the rest of the world on tech at a sharp pace, China developed a series of worrisome societal problems as it did so, and those issues required regulatory attention.

For example, a recent government survey found that heavy video game use has become widespread among 62.5% of the young adult population, with notable incidences of addiction. In one addiction example, 83% of parents in the survey cited Tencent's (TCEHY 2.43%) multiplayer arena game Honor of Kings (HoK) as a prime cause of their addiction. Last year, the game surpassed 100 million daily active users.

At the beginning of August, the state media of the central government published an article labeling video games as "mental opium" and "electronic narcotics" while directly linking the harmful effects of addiction to, in particular, HoK. In response, Tencent said it would enforce regulations for underage players -- including banning in-game purchases and banning children the age of 12 or younger from playing altogether. An estimated 23.3% of HoK players are younger than 18, and Tencent currently holds the biggest market share in the Chinese video game industry. So there's a lot for the company to lose from the new rules.

Then there is the case of DiDi Global (DIDI 0.23%), which holds a monopoly in China's rideshare space. The app had been extremely popular, but rampant price-fixing and data-privacy concerns caused the central government to suspend its new user registrations last month. While the issues mentioned are concerning enough on their own, there is an even more damaging, seldom discussed detail in this case.

A highly controversial topic is the classification of its drivers as gig workers, which saves the company billions of yuan each year in worker benefits. In late July, the central government called for food delivery platforms, specifically Meituan (MPNGF 0.50%), to pay pension benefits for more than 4.75 million of its gig delivery workers. The move could cost the company an additional 5.1 billion yuan ($787 million) per year in expenses, which is more than its entire net income for 2020. It's almost certain that the same regulatory action is coming for DiDi. which would have catastrophic consequences on its stock price.

2. Government is involved in "private" operations

Another hit on Chinese stocks is the growing role of Chinese companies in global espionage. Over 70% of privately owned enterprises in China have delegates from the ruling Communist Party involved in management, so their operations are inevitably intertwined with politics.

Take the case of Huawei. The Pakistani government contracted the company to help develop Pakistan's government infrastructure, including the storage of national security data. But news broke on Aug. 14 that Huawei stole trade secrets and some of this sensitive data by duping a U.S. software company operating in the country that had gathered the information for the Pakistani government.

The issue is by no means exclusive to Huawei. On Aug. 10, members of Britain's Parliament called for the banning of the DiDi Global app in the country, citing a law that could compel DiDi to hand over user data to Chinese intelligence agencies. It's a similar situation with TikTok, which is controlled by its Chinese parent ByteDance and has access to data from tens of millions of users in the U.S.

3. Outright frauds and scandals are prevalent

The sudden and steep rise of many Chinese companies has caused their work culture to degrade substantially from their humble beginnings. Chinese "corporate luncheons," where junior employees must drink exorbitant amounts of alcohol out of respect for senior executives, have frequently ended on a dark note.

Back in 2018, Liu QiangDong, the founder of JD.com (JD 2.82%), was arrested in Minnesota on allegations of rape after going home with a university student after a dinner party. The case was ultimately dropped as it could not be proved beyond a reasonable doubt. Three years later, the practice is once again entering the public spotlight. In August, employees of both Alibaba (BABA 0.27%) and DiDi Global came forward with sexual assault and rape allegations after corporate luncheons.

Making scandals worse is the possibility of outright fraudulent activities. During an interview segment with Bloomberg on Aug. 9, acclaimed short-seller Carson Block of Muddy Waters Research said there was "fraud from top to bottom" among Chinese stocks. Scams affect foreign and Chinese investors alike. It's part of the reason the Shanghai Composite has yet to recover to its 2007 highs.

Fraudulent accounting involving companies like Sino-Forest and reverse-merger scams have plagued the sector for much of the past decade. Last year, Luckin Coffee (LKNC.Y 6.00%) joined the list after admitting that it fabricated at least $310 million in sales during three fiscal quarters from 2019 to 2020.

For these reasons, and others previously cited, I wouldn't touch Chinese stocks until the dust has settled and the corruption has been rooted out. I suspect it might take years for that to happen, if at all.

Zhiyuan Sun has no position in any of the stocks mentioned. The Motley Fool owns shares of and recommends Alibaba Group Holding Ltd., JD.com, Luckin Coffee Inc., Meituan, and Tencent Holdings. The Motley Fool has a disclosure policy.