The stock price is collapsing as a result.

Executives and analysts often do a bit of a dance on the conference calls after a company reports earnings. Management wants to highlight everything that is going well and analysts are focused on what numbers to punch into their spreadsheets. If there are surprising numbers, management often explains them away by blaming the weather, holidays, or some other completely normal occurrence. However, they rarely take credit when those events benefit the company.

A perfect example is Inari Medical (NARI -0.99%). The stock is down 24% since its recently reported earnings, on weaker growth. It's fair to say there was at least one big surprise in its explanation. Reviewing previous statements, it's easy to see why analysts may be confused by management's excuse. 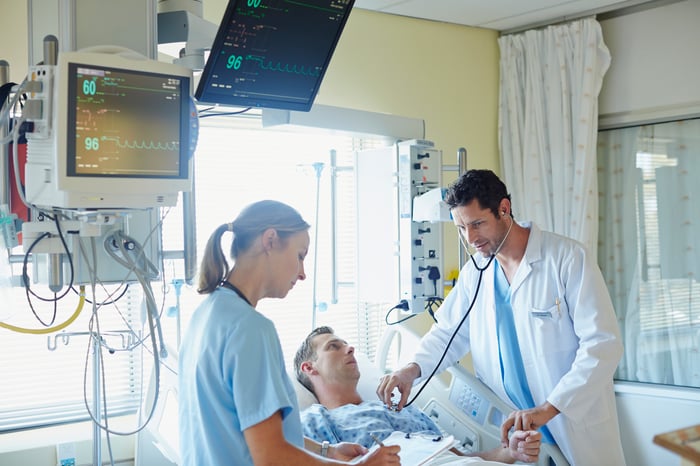 It wasn't a bad quarter

All in all, Inari's second quarter wasn't the kind you expect to get the stock cut by one-fourth. A record number of patients were treated with the company's clot-removing devices and revenue came in at $63.5 million -- a 150% increase over the same quarter last year.

In addition to the stellar sales results, the Food and Drug Administration approved Inari's new FlowSaver device and management shared positive data from its registry of previously treated patients. The company even raised guidance for the full year.

But year-over-year numbers can mask an inflection point in a fast-growing business. That's where the surprise for Inari shareholders came in. Sequential -- or quarter-over-quarter -- numbers lend more insight into a fast-growing company. Growth is a given. What matters is whether that growth is accelerating or decelerating. For Inari, it was clearly the latter.

Since the company went public in May of last year, management has consistently pointed to COVID-19 as a headwind preventing salespeople from accessing facilities and doctors. As management told it, the company grew in spite of the pandemic.

In the second quarter of 2020, management acknowledged that COVID patients had a high rate of venous thromboembolism (VTE) -- blood clots. The company said it didn't think it had benefited from this beyond the increased awareness of clots among physicians. Going further, management said very few COVID patients had been treated with its devices. In subsequent quarters, the message was reiterated. Management did acknowledge that it was possible more COVID patients had been treated with their devices than they knew of. CEO Bill Hoffman even pointed to the cloud of COVID holding back the business when he gave conservative guidance late last year.

Analysts finally started catching on in the first quarter of 2021, asking if fewer COVID patients might have resulted in soft procedure growth for deep vein thrombosis (DVT) -- a type of clot. Although Hoffman acknowledged the impact, he pointed to a shift in mix toward more serious pulmonary embolisms (PE) as the confounding factor. Again, he was explicit that there wasn't a drop off in DVTs due to COVID as much as an increase of PEs. That story fell apart in the most recent report.

Fast-forward to last week, when the company reported its second quarter earnings results. For those three months, COVID cases had significantly dropped compared to any stretch of the previous year. Based on the previous commentary, that should have opened up facilities and freed physicians to further embrace Inari's FlowTriever and ClotTriever devices. Instead, it became an excuse.

Management pointed to the COVID quarters as a "sugar high," and reminded everyone that many knew COVID could cause VTE. It turns out -- in management's words -- these cases were a significant source of patients that were treated with the devices.

For the first time, it was quantified. About 15% of all patients treated with an Inari device in the first quarter had been COVID patients. In the second quarter, that number dropped to 4%. To add insult to injury, management said the number had further weakened in July and that growth in the third quarter could be impacted by vacations. Like most of the families I grew up around or have seen on television and in movies, physicians take vacations in the summer.

There is a silver lining

Despite the stock price collapse and questions around just how transparent leadership has been, there are bright spots. First, the company still put up impressive growth -- even sequentially. Its devices are solving a problem for patients and doctors and remain in high demand. Second, getting the FlowSaver device approved shows it can execute on one part of its growth plan. That should give Wall Street confidence as Hoffman has promised to explore tangential markets. Finally, the company did raise guidance for the full year and now expects revenue to come in about 81% better than last year. It's also profitable. Vacation jokes aside, that's impressive.

It's clear that the company will have to do a better job telegraphing what's happening in the business if it wants to avoid a repeat of this in the future. However, despite the surprise and the subsequent caution flag, shares appear fairly priced if the growth story gets back on track next quarter. As an investor, I'm willing to give a new management team a little slack as they navigate a very uncertain world.