These two electric vehicle makers are plucky upstarts, but can they really deliver?

Amid the recent flurry of interest in electric vehicles, several new EV companies have been in the news, including Nio (NIO 3.44%) and Lordstown Motors (RIDE -3.16%). Nio just published its second-quarter 2021 earnings on Aug. 11, while Lordstown recently gained the conditional backing of a hedge fund.

Up to this point, Nio has been producing a few thousand cars per quarter but has a market cap over $74 billion. Meanwhile, Lordstown, which has produced under 100 cars as prototypes, is valued at over a billion. Investors might question if either is a good buy at this point, though some factors appear bullish -- at least in the very long term.

The stock market bid Nio's share price down ahead of its earnings report, but as it turned out, the Chinese automaker's results beat Wall Street analyst consensus in the significant metrics. Its revenue of $1.3 billion surged 172.2% year over year, coming in about $20 million above analyst expectations. Earnings per share were negative because the company registered a net loss, but the $0.03 adjusted loss per share was smaller than the $0.11 loss per share forecast.

Revenue gains look positive, while the net loss generated continues to shrink. Net loss and loss per share have moved steadily closer to zero over successive quarters and appear set to transition into positive territory late in 2021 or sometime in 2022. Potentially more troubling, however, is Nio's slowness in ramping up production in actual vehicles built and delivered. Vehicle sales rose 127% year over year, but only amounted to 7,911.8 cars during Q2 2021. The number sold grew only 6.8% from the previous quarter's 7,405.8 cars. 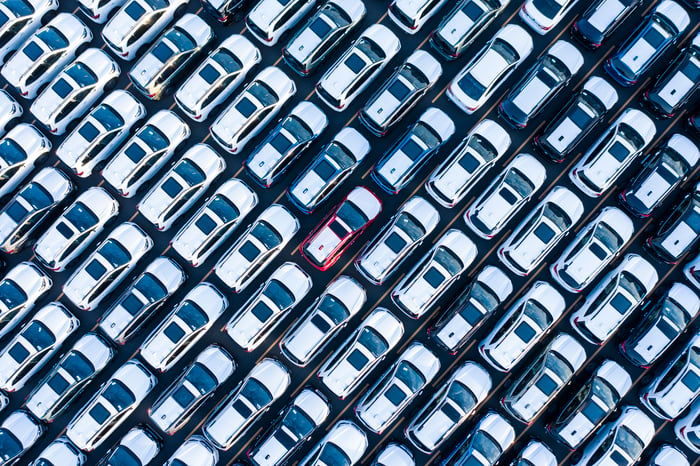 Rather than improving economies of scale, Nio's vehicle margin dropped from 21.2% in the first quarter to 20.3% in the second. Deliveries of vehicles per month (not to be confused with sales cited above) also remained basically flat for four months running. According to the press release, 21,896 total vehicles were delivered in Q2, or an average of approximately 7,300 per month. The quarterly report also mentions 7,931 deliveries in the next month, July -- a slight increase but still in the same ballpark as the second quarter.

CEO William Li, speaking during the Q2 earnings conference call, said Nio now expects 23,000 to 25,000 total Q3 deliveries, up several thousand from previous guidance. While this is an improvement over Q2, it's a modest one, with monthly deliveries averaging out to 7,667 to 8,333 vehicles. Li remarked on how the company's "monthly order intake keeps growing, but the delivery volume will be determined by the overall capacity of the supply chain," and COVID-19 outbreaks in several regions where some company facilities are located have been reducing or halting component production.

Overall, it looks as though Nio is building a solid market position for itself but is unlikely to generate any explosive gains for a long time to come.

Lordstown's new support comes at the cost of dilution

Formed for the purpose of manufacturing the Endurance electric pickup, Lordstown Motors is still working up to producing its first vehicle. When it reported its Q2 2021 results, revenue was of course zero, as has been the case with every quarter thus far. The company's cash burn was $110 million for the quarter, and loss per share was $0.61, compared with a $0.11 loss in Q2 2020.

Lordstown's current situation is unclear, with only executive statements available with which to build a picture of what's happening. In June, President Richard Schmidt admitted frankly at an Automotive Press Association conference that the company will run out of money entirely by May 2022 in the absence of sales. The company's planned partnership with Camping World Holdings to produce electric recreational vehicles collapsed in July. Camping World still says it plans to reveal something related to electric RVs in mid-September. But during its recent Q2 earnings conference call, CEO Marcus Lemonis said Camping World's "leadership and disruption in the electrification of the recreation space is not linked to any one company," likely confirming Lordstown Motors will not be the RV company's partner in the project.

Not everything is looking bleak for Lordstown, though. The company says in its Q2 report that it will start "limited vehicle production" in late September. Executive Chairwoman Angela Strand also said the company might lease out part of its huge Lordstown production facility or make vehicles for other enterprises under contract, noting the "size and scope of our facility is such that we could easily accommodate additional manufacturing partners while still affording us the ability to build a successful Endurance program."

The company's in-wheel motor technology could be a boon for its bottom line if it ever begins large-scale manufacture, according to some research. Allied Market Research, in an Aug. 9 report, says government safety regulations in the Asia-Pacific region and elsewhere could cause a massive surge in demand for in-wheel motor products. The market, still under $600 million last year, is expected to grow by an explosive 35.8% compound annual growth rate (CAGR) through 2030, surpassing $12 billion worldwide by that year. Of course, in order to benefit from this market, it must first begin manufacturing actual vehicles with good safety and performance characteristics.

Lordstown Motors has also attempted to solve its previous monetary problems by inking a deal with Cayman Islands-based hedge fund YA II PN Ltd, in which it has the option to sell up to $400 million in common stock to the hedge fund. This deal is a double-edged sword, since while it allows Lordstown to obtain nearly half a billion dollars in funding if needed, it will also dilute existing shareholders' stakes with the issue of up to 35.1 million additional shares.

With its new financial arrangements, the possibility of leasing out factory space and/or production, and the potentially growing demand for in-wheel motor vehicles, Lordstown Motors might eventually turn profitable. However, at the moment, the risks look very high, and if the company does become successful, the time frame in years could be even longer than Nio's.

Is either stock worth buying into right now?

Explosive gains appear out of the question in both the short and medium term for Nio and Lordstown. Unless some drastic, unforeseeable change occurs, it appears that Nio, though successful and with more than 124,000 deliveries since it began operations, is ramping up production very slowly, with deliveries almost flat during the past four months. It seems likely to generate a slim positive net income next quarter instead of a loss, a significant milestone, but all of its gains are slow and modest.

With sales, deliveries, and net income improving but only by an inch at a time, Nio's reasonable valuation is already fully priced into its $72 billion market cap. This is already much higher than Ford Motor Company's $55.2 billion market cap despite delivering a fraction of the vehicles Ford makes and sells annually. Until production eventually ramps up sharply, ther aren't many other catalysts that would drive its stock price.

Lordstown Motors appears far riskier, with zero current production, gimmicky technology (in-wheel motors) with possible safety issues, and a $1 billion market cap that looks very high in light of the fact its first concept vehicle doesn't even exist yet. Its hedge fund backing might keep it afloat for some time at the cost of stock dilution, but at this point any eventual success or production is unproven guesswork, and when picking electric car stocks, it looks like one to avoid -- at least for now.