The least expensive COVID-19 vaccine stock right now isn't one of the leaders in the market -- at least not yet.

Valuation, schmaluation. That seems to be the view of many investors right now when it comes to Moderna (MRNA -3.52%). The vaccine maker's market cap is close to $150 billion, and approached $200 billion just a few days ago.

However, not all vaccine stocks are priced so richly as Moderna. What's the cheapest COVID-19 vaccine stock on the market right now? There's one surprising winner. 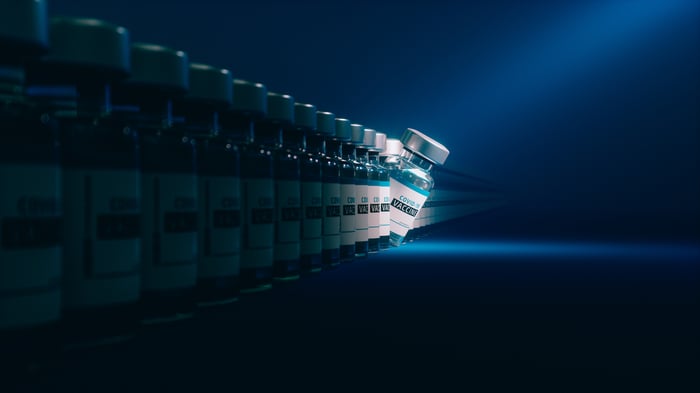 There are five companies trading on major U.S. stock exchanges that currently have COVID-19 vaccines on the market somewhere in the world. They include Moderna, Pfizer (PFE -0.35%) and BioNTech (BNTX -1.78%), and Johnson & Johnson (JNJ -0.06%), all of which have coronavirus vaccines currently available in the U.S. AstraZeneca (AZN -0.07%), which has a vaccine authorized in several countries outside the U.S., is also traded on a U.S. exchange.

In addition, there are a handful of other publicly traded companies that are evaluating COVID-19 vaccine candidates in late-stage clinical studies. Novavax (NVAX 6.60%) expects to file for Emergency Use Authorization (EUA) for its candidate, NVX-CoV2373, later this year. Others include big pharma companies GlaxoSmithKline (GSK -0.54%) and Sanofi (SNY -0.18%), along with the smaller biotechs CureVac (CVAC -1.30%) and Dynavax (DVAX -3.30%).

We can't use earnings-based metrics to compare the valuations of these vaccine stocks for a simple reason: Several of them aren't yet profitable. However, to get a good sense of how the stocks stack up against each other, we can use forward price-to-sales (P/S) multiples. I used the current prices and the consensus analyst estimates of 2022 revenue for each stock to determine the cheapest of the bunch:

GlaxoSmithKline was easily the least expensive vaccine stock of all, based on forward P/S ratios. The big drugmaker isn't as frequently mentioned in discussions about COVID-19 vaccines because it wasn't one of the first to advance a program into clinical testing.

However, GSK's adjuvant technology is being used in several COVID-19 vaccine candidates, and three of those are currently in late-stage testing.

Cheap for a reason, but maybe just a season

There's a good reason why GlaxoSmithKline stock is cheap: The company has underperformed compared to its peers. GSK projects that its adjusted earnings per share will fall this year by a "mid-to-high single-digit percentage."

GlaxoSmithKline CFO Iain Mackay noted in the company's Q2 conference call that the earnings guidance excludes any potential contribution from its COVID-19 programs. The drugmaker posted solid second-quarter results. However, Mackay said, "There remains potential for further pandemic disruption, and we believe it's premature to change guidance."

Still, there's a case to be made that GSK stock won't be as cheap as it currently is for too much longer. The anticipated spinoff of the company's consumer health unit next year will give GSK around $11 billion to invest in its core pharmaceutical and vaccine business. The company also expects a strong sales rebound for its shingles vaccine Shingrix in 2022.

There are two vaccine stocks that I think could be better bargains than GlaxoSmithKline -- Dynavax and Novavax. Sure, they both have higher forward P/S multiples than GSK, but they should also have stronger growth prospects.

Everything seems to be going Dynavax's way these days. In the second quarter, the company reported record sales for its hepatitis B vaccine Heplisav-B, and the vaccine appears to be on track to become the standard of care in the U.S. I expect a solid European launch for Heplisav-B as well.

Dynavax also has a major growth driver with its CpG 1018 adjuvant. Several companies are developing COVID-19 vaccines using the powerful adjuvant, which is also used in Heplisav-B.

I think that Novavax is another stock with plenty of room to run. The key for the company is to win EUAs for NVX-CoV2373. Although the vaccine has experienced delays in its EUA submissions, its phase 3 data should be enough to win regulatory green lights, as long as the company can show that it can manufacture it with consistent quality.