Please ensure Javascript is enabled for purposes of website accessibility
Log In Help Join The Motley Fool
Free Article
Join Nearly 1 Million Premium Members And Get More In-Depth Stock Guidance and Research
By Will Healy – Aug 20, 2021 at 7:44AM

GrowGeneration's (GRWG 5.53%) latest quarter under the grow lights appeared to have produced a bumper crop of revenue and earnings increases. Nonetheless, investors sold off stock in the Denver-based hydroponics retailer, and it lost more than one-fourth of its value over the next two trading days. While an ongoing challenge could discourage some stockholders, investors still have three compelling reasons to consider this stock.

GrowGeneration provides hydroponics supplies and equipment for the cannabis industry. Although stores such as Home Depot (HD 0.28%) also offer some of these goods, GrowGeneration's specialization allows it to provide a wider array of products compared with a more general retailer.

Grand View Research forecasts the global marijuana market will grow at a compound annual growth rate of 27% through 2028. Such increases have helped fuel the expansion of GrowGeneration, which currently operates only 58 stores. 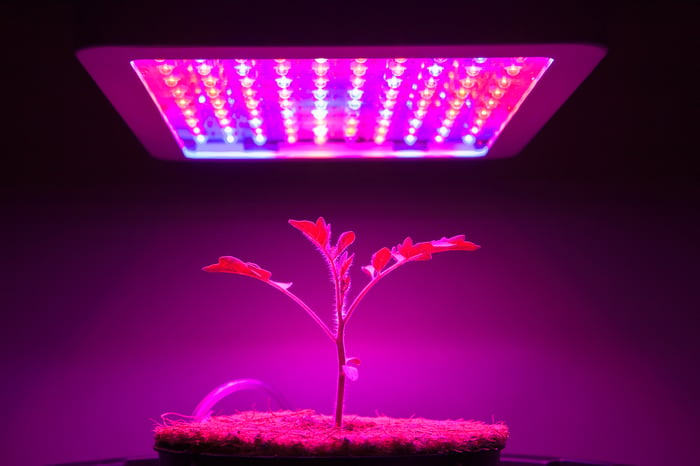 Despite this small size, it has announced big plans for expansion. The company added 20 locations over the previous year alone and has expressed an intent to open stores in all 50 states eventually. By 2023, it plans to expand to 100 stores.

GrowGeneration has also moved beyond serving as a mere retailer. It has solidified its value proposition by investing heavily in private-label products.

In December, it purchased Canopy Crop Management, giving the company a portfolio of soil enrichment products. Canopy Crop earned recognition as the leading silicic acid company before the acquisition. GrowGeneration also bought Char Coir in March. Char Coir produces coco-based products that can serve as a sustainable alternative to rockwool, a fibrous material used for growing crops in a hydroponic environment.

Such product lines not only give growers a reason to visit GrowGeneration but also help to standardize products in an industry that has not yet fully developed. They also contribute significantly to revenue growth. In the latest quarter, private-label products accounted for about 7% of sales, up from under 1% in the year-ago quarter. Moreover, since the company has invested heavily in e-commerce, it can sell many of these products in areas where it has not built stores.

Reason to consider: Growth relative to its stock price

The store expansions and private label offerings helped take quarterly revenue to $216 million during the first two quarters of 2021, a 183% increase compared with the first half of 2020. This allowed income for that period to rise to $13 million, a massive increase from the first two quarters of 2020 when the company earned just under $500,000 in profit. During that time, GrowGeneration helped to boost earnings by limiting the growth of operating expenses to 121%.

Furthermore, the company also raised full-year revenue guidance to between $455 million and $475 million. If this holds, this will mean growth of at least 135% from 2020 levels.  While that amounts to somewhat smaller increases compared with the first half of 2021, it still means the company's rapid growth should continue into the foreseeable future.

The recent sell-off has also taken the retail stock to the low-$30s per share, levels it had not seen since last November. Admittedly, the stock has experienced a huge run since its low near $3 per share in March 2020. Nonetheless, since an intraday peak of $67.75 per share in February, it has fallen 55%. Such a rapid drop could hint at a buying opportunity. 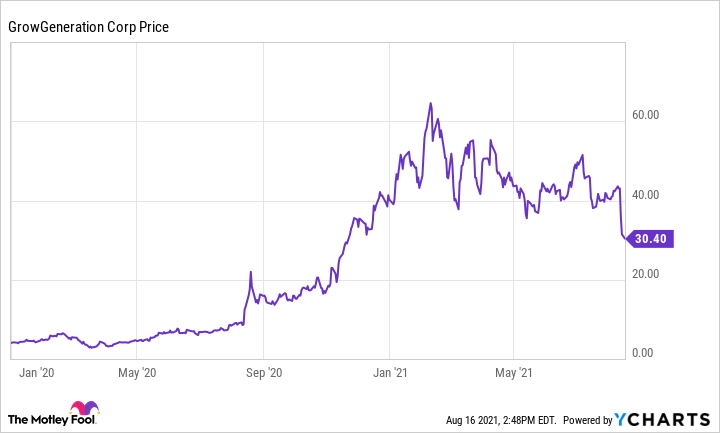 However, even after the drop, valuation remains a factor that could deter some prospective buyers. Before earnings, the price-to-earnings ratio stood around 180. Even after reporting triple-digit growth rates, such a multiple prices GrowGeneration for perfection, which can often lead to a sell-off at the slightest hint of bad news.

Also, despite the "imperfection" of the most recent report, investors could find the current P/E ratio of 130 difficult to justify with companies like Home Depot supporting a P/E ratio of 24. Additionally, the somewhat slower growth rate or the announcement that it would issue 500,000 shares to fund acquisitions on the Q2 2021 earnings call could have also contributed to the drop.

Still, investors should remember that from a sales perspective, its valuation has become more reasonable. After peaking at a price-to-sales ratio of 15 in February, the most recent decline has taken the sales multiple to just over six. Such a valuation may begin to look inexpensive when considering the triple-digit revenue growth rates.

GrowGeneration has emerged as the leading hydroponics retailer in the U.S. The rapid growth of the cannabis industry, along with the rising number of stores and private label products, could fuel further massive increases. Although it just showed that its lofty P/E ratio could spook investors when news falls short of perfection, GrowGeneration's forecasts for triple-digit revenue growth and promising expansion prospects could make it the U.S. cannabis stock of choice.

3 Reasons to Consider GrowGeneration Amid a Mixed Earnings Report
376%