The company, which specializes in home infusion therapy, has risen more than 66% this year.

The stock just was added to the S&P MidCap 400, which, in addition to boosting the stock on Wednesday, will likely help it in the long run. 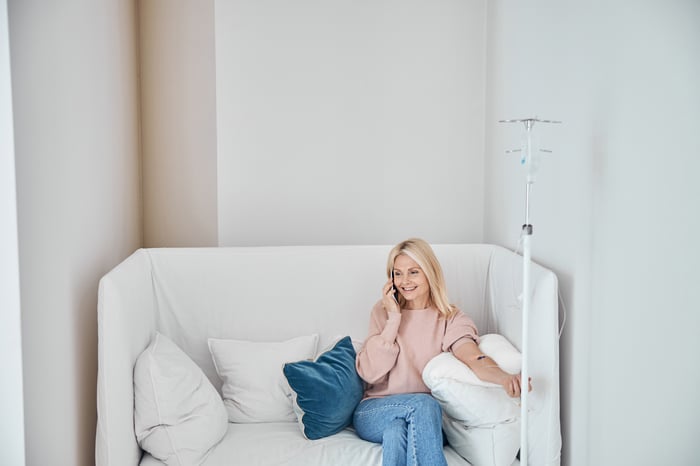 Joining the index is a status symbol for up-and-coming companies and when a stock is added to the benchmark index, index funds and other investments tied to it automatically buy the stock.

The healthcare company specializes in infusion therapy through the use of trained nurses who go to a patient's home to administer, through an IV, drugs for chemotherapy or to treat autoimmune disorders, congestive heart failure, and various blood disorders, among other conditions. The point is to lower costs by keeping the treatment in the home, rather than a hospital or doctor's office.

It is coming off a solid second-quarter report, where it beat earnings and revenue estimates, so there are plenty of reasons the stock could continue to rise. In the quarter, Option Care reported net revenue of $860.3 million, up 16.1% year over year. Gross profit was $199 million, 23.1% of net revenue compared to 22.4% of net revenue in the same period in 2020. It also listed net income of $31.8 million, compared to a net loss of $7.7 million year over year.

The company also increased its outlook for the year, saying it expected revenue of $3.35 billion to $3.5 billion and cash flow from operations of at least $170 million. That represents a rise of at least 10.4% from the $3.03 billion it had in revenue in 2020 and the fifth consecutive year of annual revenue increases for Option Care.

One concern that could slow the stock's rise, however, is its valuation may be considered by some to be pretty high, with a price-to-earnings ratio of 97.02.